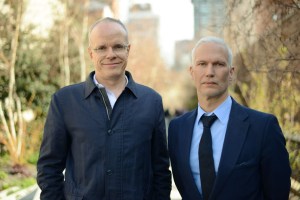 “We are so experienced at the ping and pong that this could go on for 23 years,” said Klaus Biesenbach, standing next to his sparring partner, Hans-Ulrich Obrist, at a preview of the exhibition they’ve curated here called “14 Rooms.”

“Klaus and I, we touch base every day,” said Mr. Obrist.

“That is true,” said Mr. Biesenbach.

“14 Rooms”—the topic of conversation between the two men in natty suits with heavy accents, and one of the more talked-about exhibitions here in Basel—is the latest iteration of the duo’s roving showcase that was previously shown in Manchester in 2011 as “11 Rooms,” at the RUHRTRIENNALE in 2012 as “12 Rooms” and in Sydney in 2013 as “13 Rooms.” Visitors pinball between separate enclosed quarters, each containing a different work of performance art as installation, zigzagging into different cells as they please. Mr. Biesenbach noted that he intended it to be an homage to an actual domestic abode (the doors all have stately wooden doorknobs) but really it comes across as a massive art world carnival, complete with magic tricks, feats of strength and a hall of mirrors.

Indeed, this theme of reflection is one that both Mr. Biesenbach and Mr. Obrist played up as they took us through the Herzog & de Meuron-designed space that houses the rooms.

“There was this moment where the mirror was replaced by the camera,” said Mr. Obrist.

“I could never think I could take a picture and show it to people but now with social media, I can,” said Mr. Biesenbach.

“There are so many selfies now. Take Dominique’s piece. What do you do when you see a mirror? You make a selfie!” said Mr. Obrist.

The Dominique Gonzalez-Foerster piece in question was perhaps the most intriguing of the rooms, at least from the outside, where a line of 30-odd people waited to enter (this was during the press preview—the lines during the public opening must be maddening). Stirring up interest is the fact that only one person is allowed in at a time and that the program offered no details about what’s behind the door, stating that it was “a secret.” We won’t give anything away, but if our Instagram feed is any indication, there will be selfies.

And this is despite a rigidly enforced ban on photography inside “14 Rooms,” which comes as a slight surprise given the curators’ enthusiastic approach to Instagram and its creative possibilities—Mr. Biesenbach with his stream of selfies with James Franco, and Mr. Obrist with his Art of Handwriting project, which features pictures handwritten one-liners by the likes of Yoko Ono and Kanye West.

Many things on display in “14 Rooms” would make for excellent clandestine iPhone photo fodder: there’s Damien Hirst’s Holly, Gretel, in which two identical twins were reading the same Jodi Picault novel under a Hirst spot painting; Marina Abramovic’s Luminosity, from 1997, featuring a nude woman suspended on the wall and washed in the glare of a spotlight; an early Bruce Nauman performance called Wall-Floor Positions; and, as an epilogue, Jordan Wolfson’s [Female Figure], the now-famous robot that was on view at David Zwirner earlier this year.

Leaving the Roman Ondak room, wherein an actor tries to barter with visitors, we almost knocked right into the two curators. Mr. Obrist realized he had forgotten to tell us something.

“You know, the founder of Instagram came by the exhibition yesterday, and this was so exciting!” said Mr. Obrist.

Did they take a selfie together?