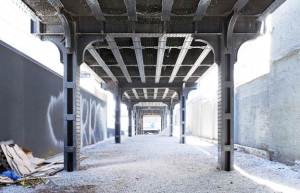 The lot. (Photo by Jason Schmidt/Lisson)

Lisson Gallery, which operates two galleries in London and one in Milan, announced this morning that it has secured a 15-year lease on an 8,500-square-foot space under the High Line between West 23rd and 24th Streets and plans to open there in the first half of next year. The Art Newspaper was first with the news.

The address for the new gallery is 504 West 24th, a prime location that puts it on the same block as Gagosian, Gladstone, Mary Boone, Andrea Rosen, Luhring Augustine, Metro Pictures and Matthew Marks. Alex Logsdail, the New York-based son of Nicholas Logsdail, who founded Lisson in 1967, will direct the space, which will be designed by Christian Wassmann and Markus Dochantschi.

In recent years, some formidable and longstanding Chelsea players have moved to more modestly priced neighborhoods (or announced plans to do so, like Casey Kaplan), but other blue chippers apparently continue to feel comfortable betting on the area, with mega-dealers Hauser & Wirth opening on West 18th Street in early 2013.

Lisson represents nearly 50 artists, including Marina Abramovic, Ai Weiwei, Daniel Buren, Dan Graham, Joyce Pensato, Lawrence Weiner and others. Many have had New York representation for some time, so no doubt all sorts of interesting conversations will be transpiring among vested parties.