Raised in New Zealand, now based in Los Angeles after a long stint in London, Mark de Clive-Lowe has carved out a significant reputation over the past 20 years as an electronic dance music producer (he’s worked with Jody Watley, Lauryn Hill, Sy Smith, and dozens more). But before he started messing around with breakbeats and samples, he was a jazz pianist. For a while, these two main strands of his musical life stayed separate from each other. Then he went to Church—the name of the regular club nights he’s hosted in L.A. and New York for more than a decade—and began tying them together. At Church, live remixing meets traditional instrumental improvisation, and everyone can see and hear how closely related they actually are.

You’ll get a pretty good sense of what happens on a Church night from the video clip above. Here Mr. de Clive-Lowe is working on his own, creating a piece from the drum machine foundation up, adding one synth texture after another, tossing off rhythmic and melodic asides, finally topping everything with a magisterial piano line. Keep in mind, however, that Church gigs involve a lot more people: singers and musicians who’ll ride the grooves Mr. de Clive-Lowe constructs and use them as inspiration for new parts, which he’ll then sample and transform even further.

Mr. de Clive-Lowe’s latest album is called Church; not surprisingly, it was recorded using the same basic approach as the club shows, enlisting a cumulative crew of 15 other players, including sax/flute man Tivon Pennicott, trombonist Robin Eubanks, trumpeter Duane Eubanks, bassist Tim Lefebvre and drummer Nate Smith. Drastic recastings of Abdullah Ibrahim’s “Imam” and Charles Earland’s “Mason’s Galaxy” share space with originals that give off a pronounced psychedelic-soul vibe. The atmosphere of these tracks is often retro (in an appealing way), but the tools and the thought process behind them are totally 21st-century.

If you haven’t had a Church-going experience yet, now’s your chance. ’Round midnight on Saturday, June 28, Mr. de Clive-Lowe will commence a set at the Blue Note, playing into the wee hours with several of the musicians listed above. All creeds welcome. 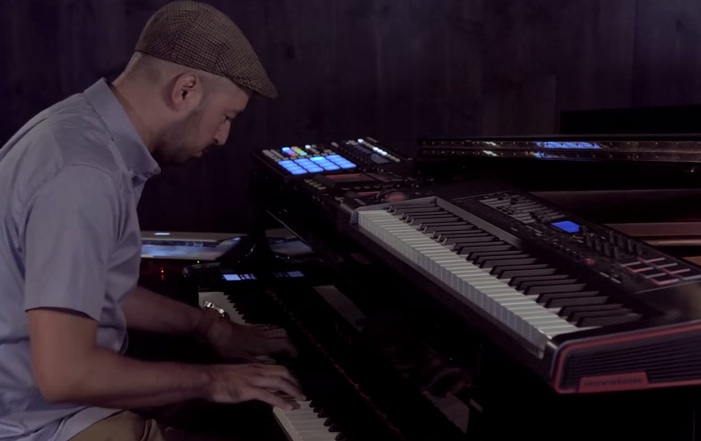