The 20 Home Chefs remaining have been dumped in the middle of the Mojave Dessert. They have no idea what’s going on. Judging by Francis L’s silver leather jacket with white fringe and angel wings producers told them they were going to a rave in 1998. Hope he didn’t already start rolling on X because here come two Army helicopters and trucks. The trucks pull up to the 20. What could be in them? The judges! Gordon Ramsay was on his own truck of course. He’s not riding with Joe and Graham. It’s uncomfortable because they have so much less money than him.

It’s the first team challenge of the season. Francis B won best meatloaf last week so his advantage is he gets to be the Red Team captain and pick the nine others on his team. If you’ve ever been picked last in sports this is a tense. First picks are Tyler and Cutter, because Francis B thinks they really know their meats. Also, Cutter was in the Military and Tyler only wears camouflage so he seems military-ish. Next up, Victoria, who hasn’t gotten a lot of screen time so far and raver Francis. Willie gets picked fifth. Why Willie isn’t the first name coming out of Francis B’s mouth makes me question his leadership. The rest of FB’s picks are Christine (who?), Elizabeth (fought with Leslie), Ahran (never heard of her), and Kira (not too familiar). The leftovers are the Blue Team. Joe tells Team Blue they need to choose a captain. The team stares blankly at him. After Joe yells “now” at them again they all pick the guy with a leather jacket and tattoos. Daniel is the king of the losers. The teams load up in the trucks, put on helmets and find out what their challenge is: both teams must feed 500 soldiers at the Fort Irwin National Training Center. They will be cooking outside in a field kitchen. The meal must include a grilled meat, sauce and side. The soldiers will eat both and vote for the best one. Screw up this challenge and you might get accused of hating America by Fox News or at least by me.

The clock has started, two hours to cook and two hours to serve. Teams have a choice of meat: pork chops, chicken or steak. It’s pork chops with a mac & cheese side for the Red Team. Blue Team will of course be going with steak. No, I mean chicken. Are you shitting me? OK, The Blue Team hates America. Malibu Leslie was trying to push for steak but the rest of team shut him down. To be fair, whenever Leslie talks you want him to stop talking. The guy is a douche but even douches love steak. Gordon Ramsay asks Leslie why they went with chicken. Leslie tells Gordon that he wanted steak but the group went with barbecue chicken and potato salad. Leslie is also a bit of a snitch. Rap sesh with judges reveals that it’s kinda impossible to make mac & cheese without an oven, chicken sucks, and this the biggest challenge MasterChef has ever done.

Meat is hitting the grills. BFFs Joe and Graham are concerned about the lack of heat on the Red Team’s pork chops. Cutter figures he and Victoria are from Texas so it’s cool. Stephani and Leslie are the Abbott and Costello of under-cooked chicken. Those two are just bumping heads. Leslie says it’s raw, Stephani says it’s cooked, I Don’t Know is on third base. Gordon Ramsay checks on the Red Team’s progress and finds that the chicken they are saying is cooked is actually raw in the middle. Score another one for Leslie. Ramsay quote of the day, “this chicken right now is more fucking dangerous than the enemy.” Told you Red Team hates America. Gordon tells the team to cover the chicken with tin foil to keep the heat in. Then Christian starts yelling to put trays on top of the chicken like it was his idea. What’s up with Christian’s constant hat btw? He’s hiding something. Can’t trust a guy who won’t take his hat off. The Blue Team’s mac & cheese makes Gordon spit for the first time this week. I gave out that Ramsay quote of the day too early. That title now goes to Gordon asking Francis B, “are you telling me soldiers don’t know the difference between mac & cheese and mac & shit?” Gordon tells Joe that Francis B is a “headless chicken” as captain. Also, the mac & cheese is crap because they didn’t make a cheese sauce, just used cold cream and shredded cheese. The judges are also concerned that there aren’t any finished pork chops yet. Blue Team is looking good because Red is so behind. The mac & cheese is dumped and is being replaced by coleslaw. Cabbage for 500 plates has to be shredded and Joe tells them that at this pace it won’t work. Red Team looks like they are going down.

The troops are showing up. Each soldier takes a blue plate and a red plate and votes for their favorite. The plates are being served. Red Team is serving a double cut pork chop with apple chutney and coleslaw. Blue is serving grilled chicken with bbq sauce and potato salad. Once the service starts the Red Team is in the weeds. You know this because Victoria uses “in the weeds” to describe everything. Red is behind and the line is backing up. The soldiers that have started eating are finding the pork chops tough or not cooked. One soldier says the red plate is “horrible.” The loser squad who made chicken is killing it so far. There were some raw pork chops served which sounds unhealthy. Gordon is pissed again…but this time it’s for real. He stops the Red Team, yells at them about the serving raw pork, and tells them to butterfly the chops so they cook faster, duh. Red Team is still way behind. So soldiers are skipping the Red Team altogether. Red team is losing votes to missed plates and raw chops. The judges are asking around and everyone that got a cooked pork chop loves it and thinks the chicken is…chicken.

All the soldiers have all eaten and it’s time to vote. Gordon Ramsay stands on a tank and orders the soldier to stand in front of the team they vote for. Our Army is taking orders from a Brit? My uncle warned that this would happen if Obama got a second term. The soldiers line up and the Red Team wins. Team Blue is pissed. They didn’t serve raw meat, they served every soldier and they still lost. Next time make some steak, dummies.

Red Team is all safe and the Blue Team has to face an elimination pressure test. Since Daniel was the team leader he gets to save three people from the competition. He picks Christian and Gordon for their hard work. Daniel is given the option to use the third pick on himself but he declines because the honorable thing to do as the captain is to take responsibility and “go down with the ship.” Too bad Daniel is confusing ships and reality cooking competition shows. The last person Daniel saves is Dan. Leslie is upset because he thinks he deserved to be saved and now wants Daniel to go home for wronging him. Leslie is annoying but it’s fun to have a rich douche villain. Hopefully he sticks around to keep bugging people. The pressure challenge is blueberry pie. Daniel now regrets not saving himself because he does not bake. Stephani doesn’t bake either but she wants to show the judges she “thinks outside the box.” That’s the kind of thinking that had Gordon spitting her meatloaf into a napkin last week. Jaimee, the hipster baker’s assistant, has a tattoo of blueberry pie on her neck. Hipsters love pie. So does everybody but hipsters really want you to know about it. Jaimee better nail this. Elise made a blueberry pie in the episode 1 and almost went home and cried a bunch of times. Stephani is putting pecans in her crust because there were some pecans around. Daniel is way behind and is probably not going to get it fully baked.

Time’s up. Jaimee is first and as expected everyone loves it. Now Elise, self-proclaimed baker, serves up a blueberry pie with mascarpone and lavender. Gordon notices right away that it’s not fully cooked. He takes a bite and says it tastes like a “mouth full of sand.” Elise is fighting back the tears again. Jordan, as usual, sucks but not so much. Courtney made a blueberry pie with meyer lemon zest and Leslie made his pie with cinnamon and ginger. The judges love them both. The stripper and heel will be around another week. Stephani has never made a blueberry pie before and took a chance by using pecans. Sometimes taking a chance and putting yourself out there pays off big and sometime you make a shitty pie. Gordon says Stephani’s pie is too sweet and undercooked. Daniel’s pie is up and it looks terrible. The crust is all banged up but to Gordon’s surprise it tastes good. Gordon won’t even give Daniel credit for making a good filling calling it a “fluke.” Fluke or not Daniel looks safe from elimination. Joe takes a shot at Daniel saying his honor was better than his pie. He thought of that before he even tasted that pie and that line was coming out no matter what.

The judges send everyone except Elise and Stephani up to the balcony. They had the two worst pies. Gordon calls Elise up and tells her how bad her pie was to get her on the verge of tears again, then does the rug pull of saying “but Stephani’s was worse.” Elise is staying to cry another day and Stephani will be putting pecans where they don’t belong at home. We’ll miss you Stephani. 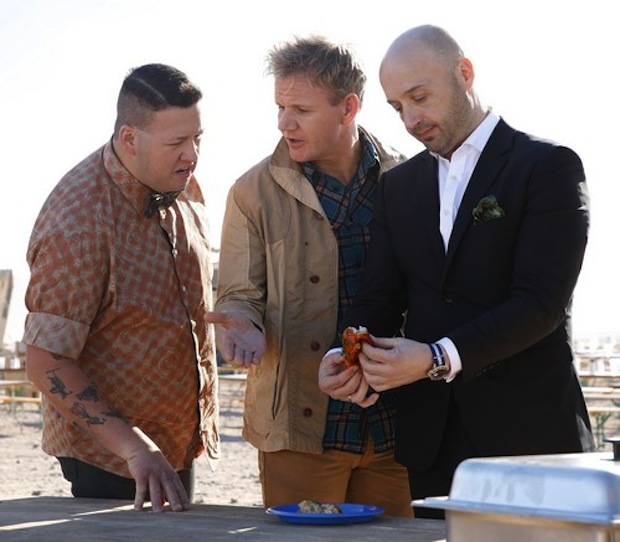