An unlikely pairing on MasterChef. (Fox)

It’s time to kick out the jams because MC5 is starting for real. Now the competition heats up. Crap, I probably should’ve saved that line for later in the season. The competition will definitely get hotter than this but let’s get to recapping. 22 home chefs gunning for the title. They’re filing into the kitchen. Cut in some contestants talking in front of a bunch of produce about how they really, really want to win this thing.

Gordon Ramsay, Joe Bastianich and Graham Elliot take the stage and oh snap, it’s Mystery Box time. The 22 get 90 minutes to cook up their best dish using the ingredients in the box. The judges are watching and tasting throughout. It’s a three count to the reveal. Gordon counts it off and the ingredients are chocolate, bananas, strawberries, blueberries, brandy, lady fingers, extracts, honey and ground coffee. You had me at chocolate and lost me at everything else. Is the theme Snacks for Grandma’s Mahjong Game? They better make something awesome out of that because Joe tells everyone that somebody is going home at the end of this challenge. Willie is happy about the ingredients because he loves desserts, “I’m very sweet”. Yes you are, Willie. First challenge is dessert and an elimination. MasterChef will zig when you think it’s going to zag.

90 minutes on the clock and go. There’s a planned impromptu convo among the judges about what the potential problems are. Graham points out that the home chefs have to get the balance of sweet and savory down. Gordon thinks that contestants need to watch out for over-complication. So what’s the stripper making? Courtney, the exotic dancer and college student, is making a honey bee cake with pecans. She pronounces it p’cons, fancy. Back to Willie. He’s making spicy gingerbread cakes. Let’s meet Willie’s family real quick. He lives with 13 people and he cooks for all of them. He mother doesn’t cook, his grandmother doesn’t cook and his aunt doesn’t cook and all those people are counting on Willie bringing home that 250k. That’s a lot of pressure. Joe and Graham go check in with Cutter to see what he’s all about.

So, Cutter is an oil man who’s served in the military as a search and rescue swimmer. If he can jump out of helicopters he’s gotta be able to make some dessert, although, there isn’t a lot of crossover in those skills. We’ll see. Cutter is making cappuccino pudding with biscotti dipped in chocolate. Gordon wants to see how Astrid is doing. Not good. She’s never baked. You knew you were going on a cooking show right? For her first baking attempt ever Astrid is making lemon tarts. Courtney slips her cake into the oven while blowing it a kiss and calling it sweetheart. It’s a trick that’s very effective on investment bankers at the gentleman’s club; maybe it’ll work on that cake. We haven’t met Jaimee yet so now’s a good time. Jaimee is bakery assistant from Queens. She looks like the receptionist from Ghostbusters except she has a bunch of hipster tattoos. Jaimee claims she has no confidence but she’s got a neck tattoo and is on TV. Maybe living in Queens has got her down. Don’t worry, Jaimee. If you win MasterChef you can move to Bushwick. She’s making a chocolate pecan brownie. Jaimee shows off her thigh tattoo of an electric mixer to Joe and Graham. What a shy gal. Elizabeth tells Gordon about her strawberry balsamic cake. Gordon just really wants to know who Elizabeth thinks is going to screw up. She quietly points to the Leslie, the rich stay-at-home dad, so Gordon makes sure to say it loud and ask “Why Leslie?” “Because he like to flap his jaws and not cook so much.” Leslie is pissed.

Thirty minutes left and Leslie goes after Elizabeth. Gordon put her on the spot but she was happy to rat out Les for being Chatty Cathy. Leslie starts the tough talk “you don’t know where I’ve been.” That usually means that you haven’t been anywhere interesting. Elizabeth comes back with “you fucki*g live in Malibu.” “You want to know why I live in Malibu, sweetheart. It’s because I work my ass off.” It’s not easy marrying a rich woman. I’ve been trying for years. If you missed it in the premiere, Les talked about how his wife makes all the money while getting interviewed on his boat. Now, Gordon breaks up the fight that he stirred up just when it was getting good. Back to cooking.

Final 60 seconds and that’s it. The Joe calls Cutter and Astrid to the front. Cutter does a quick “yes!” in celebration. Graham then calls up Courtney and “Big Willie.” I don’t know if this OK with Willie but they keep calling Willie, “Big Willie.” You’d think a formerly “Giant Graham” would be a little more sensitive about the fatty nicknames. Gordon tells the four that two of them are in contention for the worst dish and the best dish. The judges reveal that Cutter and Astrid made some crap and the two stars are Willie and Courtney. Gordon doesn’t like that Cutter put the MasterChef logo as decoration on his garbage pudding. Joe tells Cutter what’s wrong with his biscotti. Did you know biscotti means twice cooked? I always thought biscotti was Italian for worst cookie ever. Astrid’s lemon tart wasn’t fully cooked. She gets sent home.

Courtney’s honey cake vs. Willie’s spiced gingerbread cake. Courtney wins. So now she goes back in the pantry and gets to select which of three ground meat dishes that will be cooked by the others in the elimination competition. Courtney doesn’t have to cook in the elimination round. She picks meatloaf. After it is announced to the home chefs that they will be cooking meatloaf everyone finds out that Courtney gets to select ten people who are safe and don’t have to cook. Courtney talks about her strategy is like playing chess but she also insults people as she selects them to be saved. Leslie, Jaimee, Gordon, Francis, Kira, Ahran, Cutter, Elise, Elizabeth and Christian are all saved.

Time to make some meatloaf. Gordon seems skeptical about what Dan is cooking. Joe and Graham — those two are inseparable — talk to Stephani about her blue cheese cream sauce. Joe looks disgusted and asks if she’s crazy. Might want to rethink your sauce, Steph. Francis is telling Gordon about his short rib and lamb meatloaf. He was going to put some cheese in it but when Ramsay starts rubbing his temples in pain at the thought of it, probably not. Whitney is a culinary school drop-out from Columbus. She couldn’t afford to stay in school so she’s hoping to win MasterChef so she can go back. What? You become the MasterChef and you want to go to culinary school. You should lose just for having the worst winning fantasy. She’s making an Asian-style meatloaf with a mango glaze. Willie is very confident about his meatloaf. He tastes it with Gordon and tells him how good it is. No way Willie is going home.

Cooking time is up. Let’s taste some meatloaf. Francis is up first. Gordon pulls the “I can’t believe you put burrata in you meatloaf…because it tastes so damn good, kid.” Big hit with all the judges. Stephani brings up her lamb meatloaf with couscous and blue cheese sauce. That happens to be the perfect combination to get Gordon Ramsay to spit your food into a napkin. If you’re not going to win you should at least get a good Gordo spit. Whitney is up next and bombs too. Gordon says “my apologies, to the meatloaf.” Whitney made G-Ram feel bad for ground meat. Tough blow.

The next few get reviewed quickly. Christine does pretty good. Jordan doesn’t do great but no insults and no spitting. Daniel gets big complements from Joe.

It’s Willie’s turn. Of course, he nails it. Dan Wu is up with an Asian-inspired meatloaf with mushrooms and kimchi that he’s feeling pretty confident about. Gordon calls it “disgusting.” That’s gotta hurt. Graham is going to announce the best dish. Come on, Willie. And it’s…Francis. Oh, come on. Twice in one show he gets robbed. Maybe I’m too emotionally invested in this. They say Francis will get a huge advantage in the next challenge, but what we really want to know is who is going home? The three worst, Stephani, Dan and Whitney, get called to the front. Gordon asks Courtney if she knows who is getting sent home and why. Courtney predicts that Whitney is leaving because there was no passion in her meatloaf. And she’s right. Gordon Ramsay sends Whitney home. She plans on continuing to save up for culinary school. Now I feel bad about the thing I said before. Good luck, Whitney! 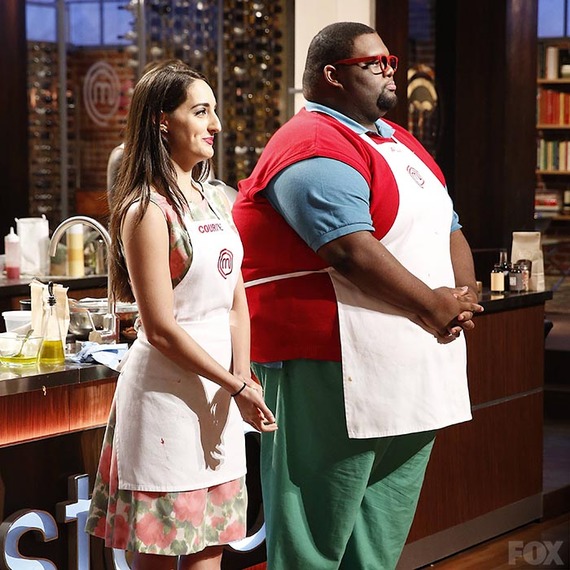