Heads up. If you’re a Willie fan, and you better be, he’s barely in this one. He’s cooking and probably made something awesome but we’ll never know what. Hopefully someone is getting a stern talking to in the editing department. Ok, let’s get down to business.

The episode starts off with Courtney talking to camera while the home cooks and judges enter the MasterChef kitchen. Courtney, the stripper from Philly, tells the camera that she’s at the top of the competition. Hard to argue otherwise. The judges love her. Looks like we’re getting a Courtney-heavy episode. There’s 19 home cooks left. Make that 18. Gordon Ramsey announces that “Little Gordon” has left the competition due to illness but assured everyone that he’s going to be OK. Get well soon Lil’ G. No time to mourn; there’s a Mystery Box to deal with.

The 18 all stand at their cooking stations in front of their mystery boxes. Before Gordon gives the word to lift the box he warns everyone to be careful because the contents are live. What!? What could it be? I’ve got some inside MasterChef info so I’m guessing armadillo. Boxes up! And it’s…live seafood. My numerous email suggestions for an armadillo challenge have been ignored. That’s everyone’s loss. The challenge is to prepare a seafood dish in 60 minutes using at least one of the live seafood ingredients. The net of seafood under the box includes clams, crabs, lobster, prawns, scallops, oysters and muscles. Just in case you’ve been living off the grid on a beach in Mexico like Jesse Ventura here’s how the Mystery Box works. During Mystery Box challenges the judges taste the dishes while they’re being cooked. Only the three best are selected to present their final dishes to the judges. The best dish wins its cook a trip into the pantry with the GJG (Gordon/Joe/Graham) as well as a big advantage in the elimination challenge. Joe tells the 18, “there’s nothing more important for a chef than to know how to work with live seafood.” The second most important thing to know is how to handle your coke. Start the clock.

First up, Joe and Graham check out what Francis B is working on.  He’s got some Middle Eastern spices in a crab broth. Joe and Graham are both impressed. Joe says, “this is what we want to see.” Next, Gordon asks Christian about his shrimp and grits. Christian is from New Orleans so he’s expected to know how to handle live seafood. Time to see what Ahran’s up to. Who’s that? I didn’t know either but apparently she’s made it this far. Ahran is youngest home cook to ever be on MasterChef. She’s only 18 and still in high school. Ahran is cooking up an Asian seafood stew. Joe and Graham point out that she hasn’t really proven herself yet and ask her whom she thinks is the strongest cook. Ahran thinks Willie is an amazing cook. Good answer. Not good enough for Joe. “We kinda see Courtney as the front runner. You don’t agree with that?” Turns out, Ahran is not a Courtney fan, saying she is getting further because of favoritism. There’s a lot of tension when Joe asks Ahran why she thinks the judges favor Courtney. Ahran just slyly grins and says, “I don’t know.” Joe coldly stares and says, “She’s a great cook.” Way to get up on the boards Ahran. You went from “who the hell is that” to “who the hell is that.” The inflection in my voice was quite different each time. It was negative sounding the first time and very excited the second time. You get it. Only 15 minutes left. The judges are checking in on whom they like so far. Gordon is big on Christian’s shrimp and grits and Courtney’s broth. Graham likes the complexity of Ahran’s stew. Francis B’s fish stock is Joe’s pick so far. Times up, hands in the air.

The judges take a final look and call up the top three. Courtney thinks her dish is the only one that looks restaurant quality. Ahran wants to show that she’s a better cook than Courtney. She’s starting to come off a little Courtney-obsessed. First top dish called up is Francis B’s spicy seafood broth with tandoori spice and sake. Gordon calls it “fusion at it’s best.” Next up is Ahran’s spicy seafood stew with bok choy, shrimp, calms, scallops and rice. Insulted the judges and still got called up, that must be some damn good stew. Graham loves it calling it a “seafood boy band.” If Graham was trying to come up with the most embarrassing metaphor ever to be uttered on MasterChef, he nailed it. Gordon noticed that Ahran seemed comfortable working with all that shellfish and thinks the stew is delicious. Gordon tells Ahran, “Underneath that little sweetie pie look you can cook.” Somebody call HR or Jezebel.com because that sounds like a violation of something. The third dish is Christian’s creole bbq shrimp and grits with cheddar and cream. Joe says Christian put his hometown of New Orleans on the plate. Gordon points out that Christian looks like he works twice as fast as anyone else. Also, he says he loves the dish. The judges love them all but only one cook gets to go into the pantry. And from out of nowhere to Mystery Box winner, it’s Ahran. She gets to be safe from elimination and pick the dish for the final challenge. The theme is sweet treats. Ahran has to choose between muffins, cookies and doughnuts. The Americaness of each item is stressed in its intro. Gordon must be working on getting his citizenship. Ahran is asked who she wants to eliminate from the competition first. You see this coming, right? Gordon asks why Ahran wants Courtney out. The reply is sooo good. “Maybe it’s because I go to high school and I have to deal with fake bitches all the time.” Oh no she didn’t. By the way, Fox did not bleep “bitch.”

Elimination challenge time. Ahran picked the all American doughnut. The cooks have to deliver a dozen doughnuts served in a box in 90 minutes. Everybody is scrambling in the pantry. Francis L is grabbing everything he can because he plans on making 12 different types of doughnuts. The judges are talking about the difficulty of doughnuts. Courtney has already screwed up her dough and needs to start over. Little problem, she doesn’t have any yeast. No yeast, no doughnuts. Ahran watches gleefully from the balcony as Courtney runs around asking everyone if they have any extra yeast. A whole bunch of nope. Until she asks Francis L, aka Scottish Francis, aka a little too old for that shirt Francis. He’s got some extra yeast and he hands it over. Ahran’s hopes are thwarted. Sort of a dumb move because he could have eliminated one of the strongest competitors. Francis B is screwed. His doughnuts haven’t risen so he balls them up to make doughnut holes. How’s Kira doing? Not good. Kira forgot to melt her shortening in with her milk. Duh, that’s like doughnut 101. Gordon suggests that she adjust for the dryness with her filling. Scottish Francis has got a lot going on. He’s making pina colada, 3 kinds of chocolate, stout with prosciutto and maple syrup. Francis is reminded by Joe that the judges are only going to taste one. The other Francis is struggling with his doughnut holes and Gordon notices. Not looking good for Francis B. We haven’t been annoyed by Leslie for the whole episode so far. Let’s see what’s up with him. Leslie has never made doughnuts before but it’s going great and he doesn’t seem to be bothering anyone. The judges are talking about who looks good/bad. Joe is shocked that Gordon thinks Leslie is killing it. They are all worried about the Frans B with his shitty holes and L for messing around with too many flavors. 90 minutes has come and gone. Who’s going home?

Before the judges start tasting, Ahran is given on last advantage. She gets to choose one cook to be safe from elimination. As she walks around to make her decision Francis B whispers a plea for mercy. Francis B is saved by Ahran. She could have let a strong competitor go down. What are they teaching in high school these days? Not reality show food competition strategy, that’s for sure.

The tasting starts with Courtney. She has made both raspberry frosted and chai doughnuts. Gordon first points out that Courtney is not wearing heels, creepy, before he tastes a chai doughnut. It’s too salty and it get the ole Gordon Ramsay spit out. Courtney screwed up and added too much salt by mistake while rushing. Graham and Joe try the raspberry and hate that too. Ahran is so happy. Leslie is next. He made 3 kinds of doughnuts: orange liqueur, blueberry with pistachio & coconut and raspberry with macadamia nuts & coconut. Gordon flips for the orange liqueur. Joe calls up Kira and tries one of her jelly doughnuts.  Big problem, no jelly. Joe cuts a few open and there’s no filling and says Kira’s doughnuts are more like Kaiser rolls. Kira claims she squeezed the jelly in there. Victoria does fine. Christine’s taste good but look like crap. Daniel made 16 instead of 12. Graham takes a bite and calls Daniel a “beast with the sugar and yeast.” Feel free to use that at parties. Scottish Francis has his 12 different flavors and suggests Gordon try the prosciutto and maple syrup. Delicious! Big win for Francis L. Now it’s Cutter’s turn. He also didn’t fill his filled doughnuts. Guess that’s a harder thing to do than it sounds. We don’t see any of the others, including Willie.

The judges have made their decision. The best 2 are Francis L and Leslie. They will both be team captains in the next challenge. The bottom 3 are Kira, Cutter and Courtney. Ahran is so excited. It’s not Cutter. The smirk is so huge on Ahran’s face as it comes down to Kira and Courtney. Is Courtney going back to the pole? Of course not. She’s a star of the show. See ya, Kira.  Next week there better be more Willie. 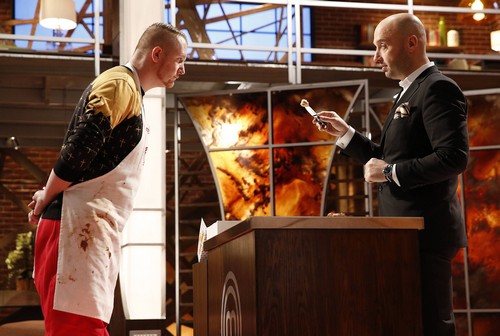