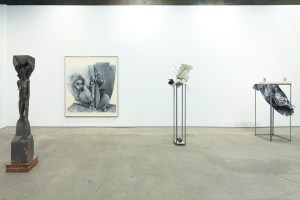 Matthew Monahan is either Circe or Ulysses. For the sculptures and works on paper at Kern, he sliced up nymphs—or one nymph repeatedly—and then put her back together, along with one or two sleeping giants and a fallen god, using bronze, steel, fire brick, rebar, photocopy toner, aluminum leaf, oil paint, polyurethane foam, cast epoxy resin, and tall, narrow tables that look like hollow steel light boxes. The theatrical, comic-book cubism that results is either thrashing out the violence and misogyny suffusing the relentlessly unreflective visual culture we’re all stuck with or attempting to turn it against itself. Is the half-present ballerina of Bright Lament, for example,demurely tilting her head with the help of the armature, or has the eternal spirit of the feminine been impaled by a piece of rebar? And is she a woman, or is she a symbol of the unbearably ubiquitous image?

Column III (The Two Step) is a pillar of bronze, not quite square in its footprint and just under seven and a half feet tall, that looks like a seasoned roof beam, upended and then split but not toppled by multiple lightning strikes. The Daphne revealed within this scorched tree is set back against herself, so that from her left she’s a zoetrope of individual and symbol—silhouette, breast, silhouette, breast—and between her right eye and the bridge of her nose is exposed the blank, interior flatness of the metal. In the gallery’s back room a twelve-foot-tall Hephaestus leans back under the skylight, like Rodin’s Balzac, in a dusty black toga, pointing his finger, his face an unpeeled mask of glittering bronze.