Congressman Michael Grimm’s campaign website is using do-it-yourself polling software to ask voters about the release of U.S. Army Sgt. Bowe Bergdahl in exchange for five prisoners at Guantanamo Bay — which the poll misspells as “Guantamo.”

“We want your opinion on the release of five Guantamo Bay terrorists in exchange for Army Sgt. Bowe Bergdahl,” the website declares, with a weathered American flag pattern serving as the backdrop.

Mr. Grimm made his own thoughts on the prisoner swap clear earlier this month as Bergdahl became a major political talking point — “disastrous” was among the words Grimm, a Marine combat veteran, used in his assessment of the deal. But the poll, which is offered in a pop-up box when visitors arrive at the congressman’s re-election website, seeks to take voters’ temperature on the issue.

The options offered are:

“We should not negotiate with terrorists.”

“We have a duty to bring soldiers and US citizens home, regardless of the situation. The President should have the power to make these decisions at a moments notice, without the consent of Congress.”

“Each situation should be handled on a case by case basis, but the President must follow the laws set forth and Congress must approve the decision.”

Mr. Grimm’s own opinion on the prisoner swap, which he commented on in an audio recording posted to his campaign website, seems to be a combination of options A and B.

In the recording, he notes the United States does not negotiate with terrorists, and adds: “By defying this policy, the president has set a disastrous precedent that immediately exposes our troops to ever greater danger.”

He said the swap violated a law requiring 30 days notice to members of Congress when prisoners are released from Guantanamo.

“The purpose of this law, which I supported, was to give you, my constituents, an opportunity to weigh in on such a major decision through your elected representatives,” Mr. Grimm said. “These actions have stripped you of that right.”

The deal surrounding Mr. Bergdahl’s release has been decried by many Republicans — some of whom originally applauded his release — especially after stories about the circumstances of Mr. Bergdahl’s disappearance raised the question of whether he may have deserted his unit.

The poll on Mr. Grimm’s site was built using Fluid Surveys, which offers users the option of building online forms for free or upgrading to options that cost $17 or $49 a month.

Mr. Grimm’s likely to had to cut down on campaign costs — copy editing on his campaign website perhaps included. His fundraising took a significant hit after he was indicted on federal fraud charges in April, and he raised just over $44,000 between April 1 and June 4, according to reports filed with the Federal Election Commission. His campaign reported more than $420,000 in debt on the same report.

Mr. Grimm’s campaign did not respond to questions about the survey. 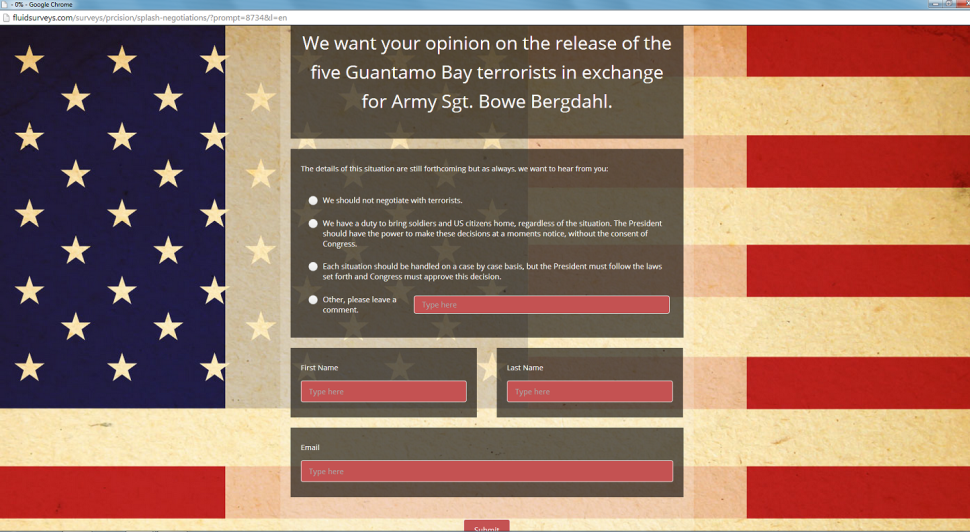