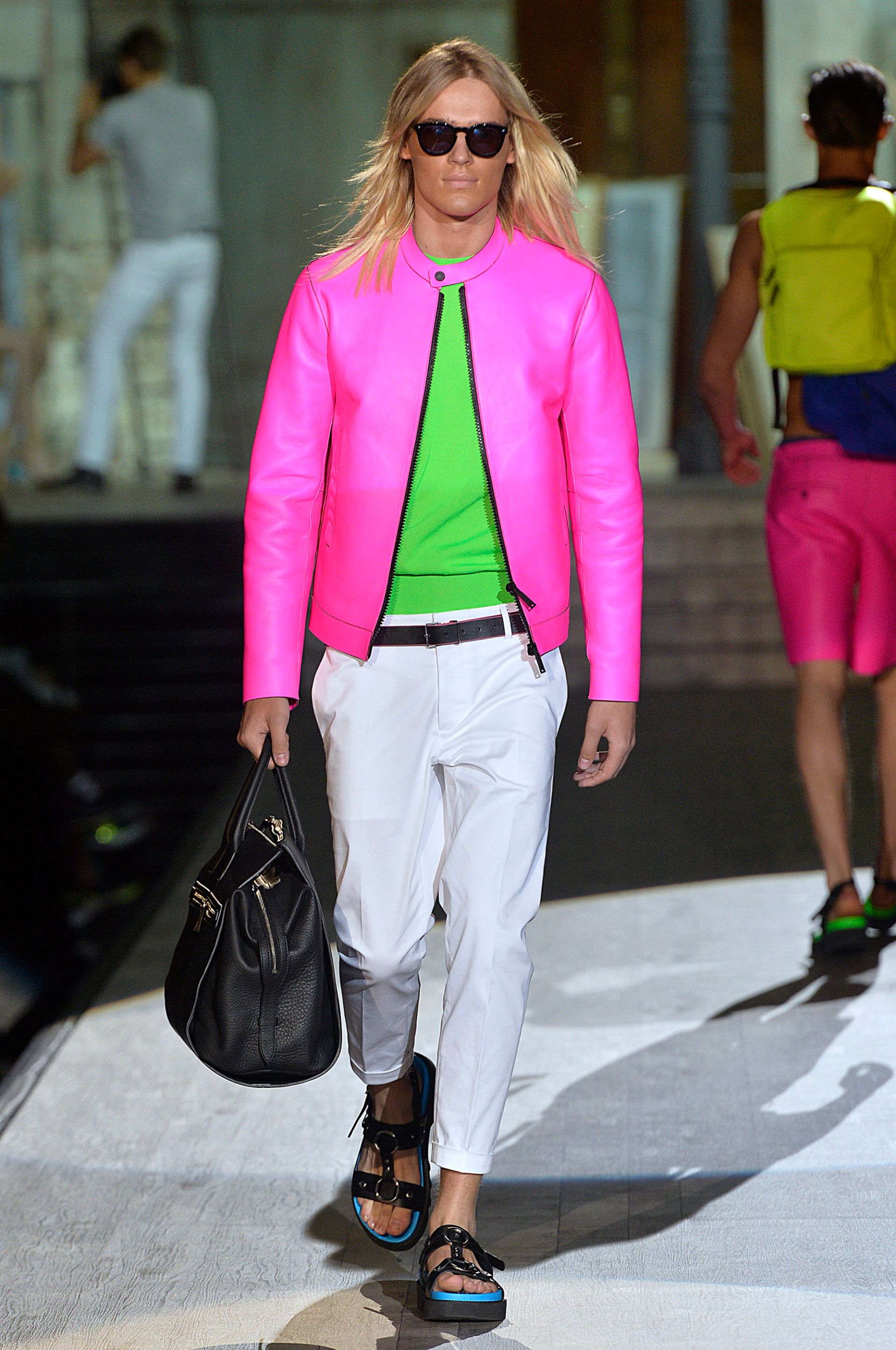 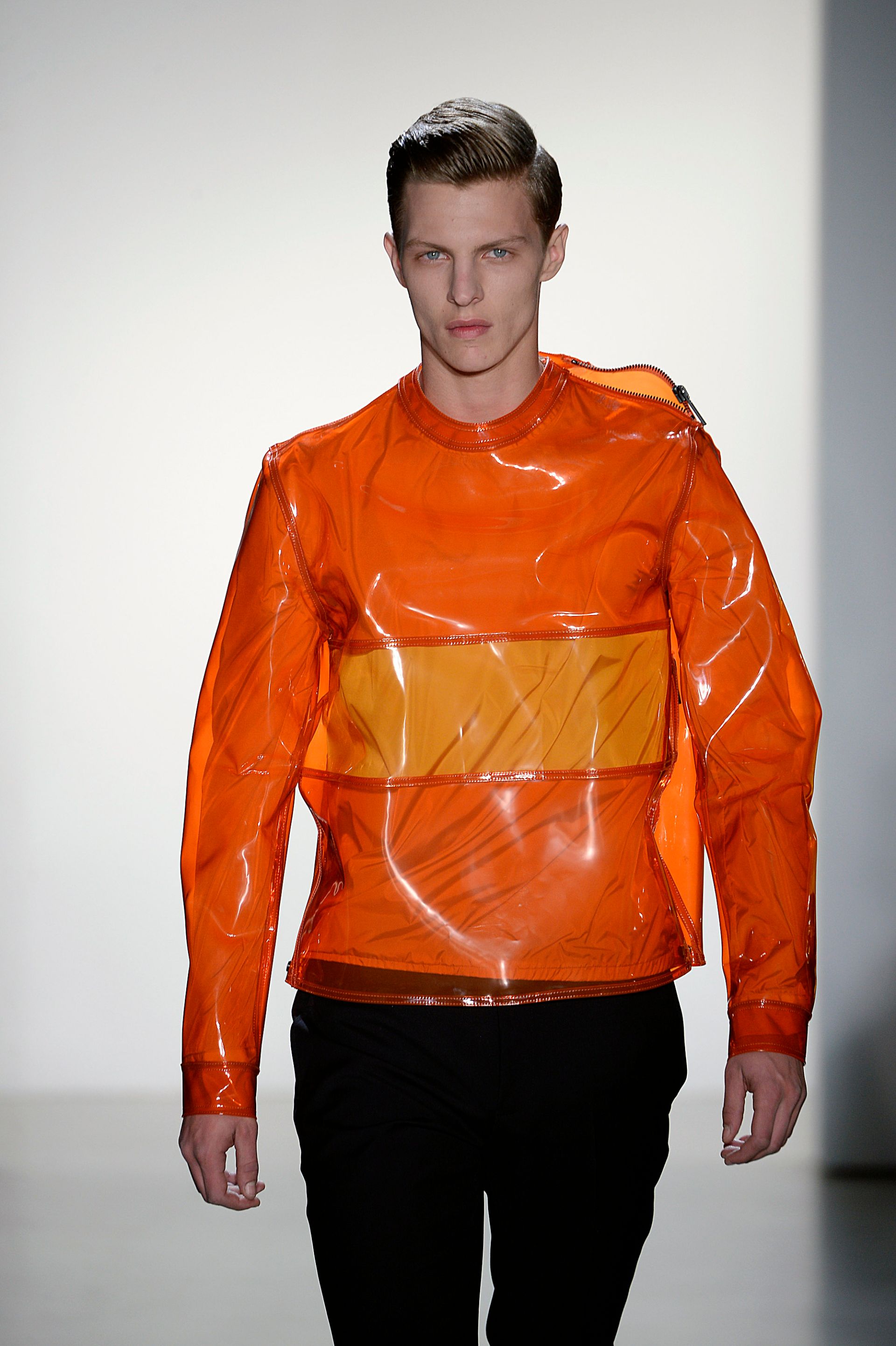 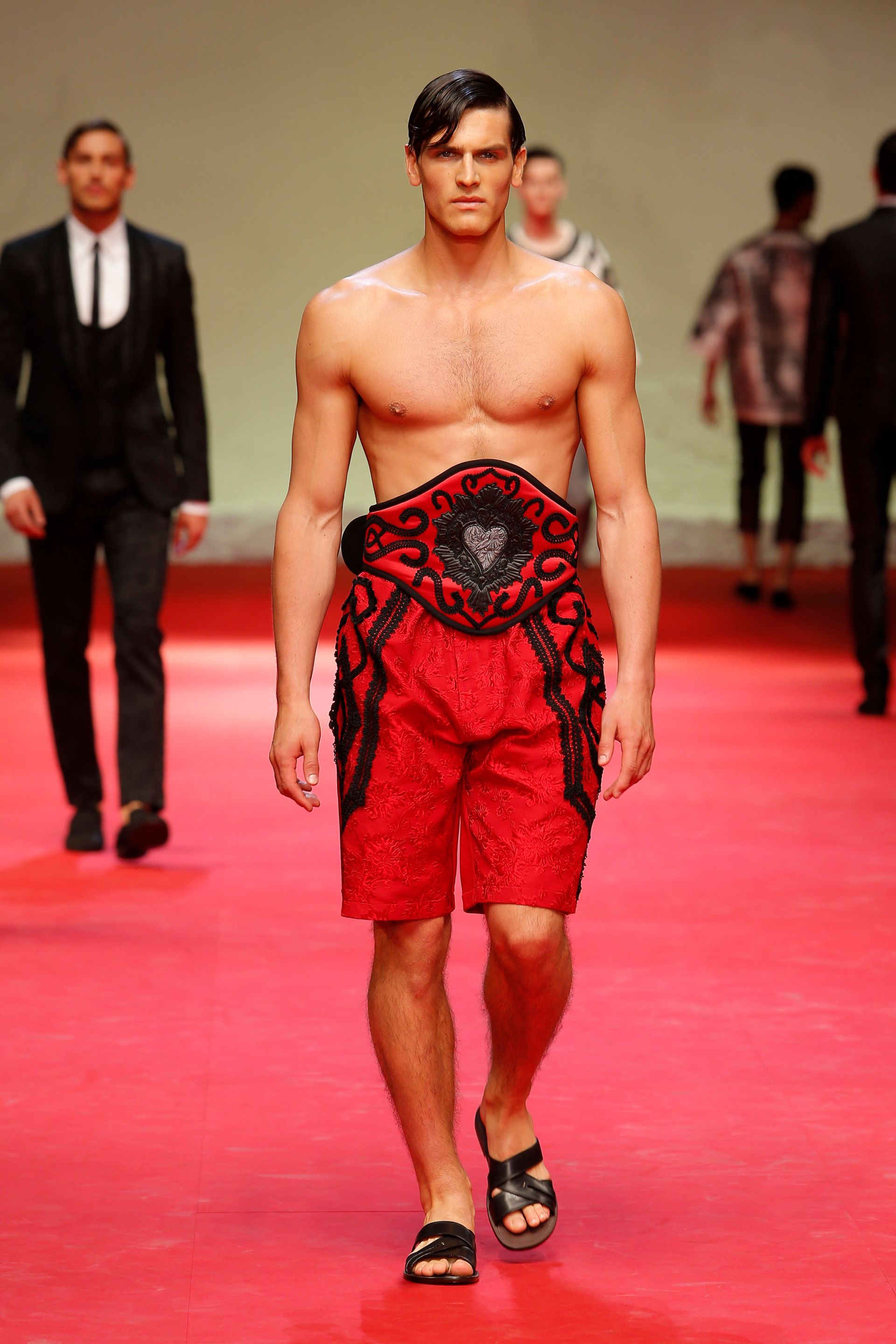 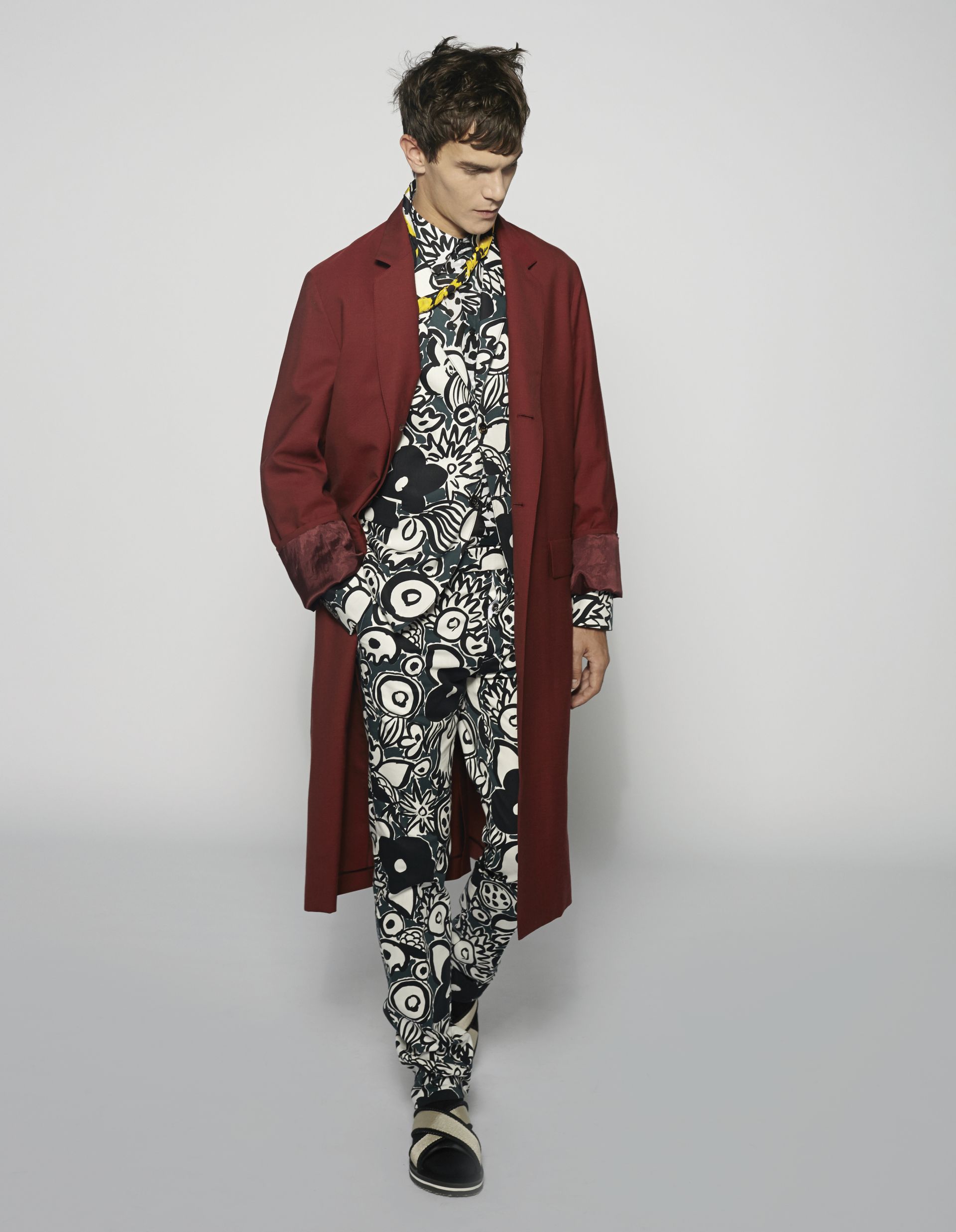 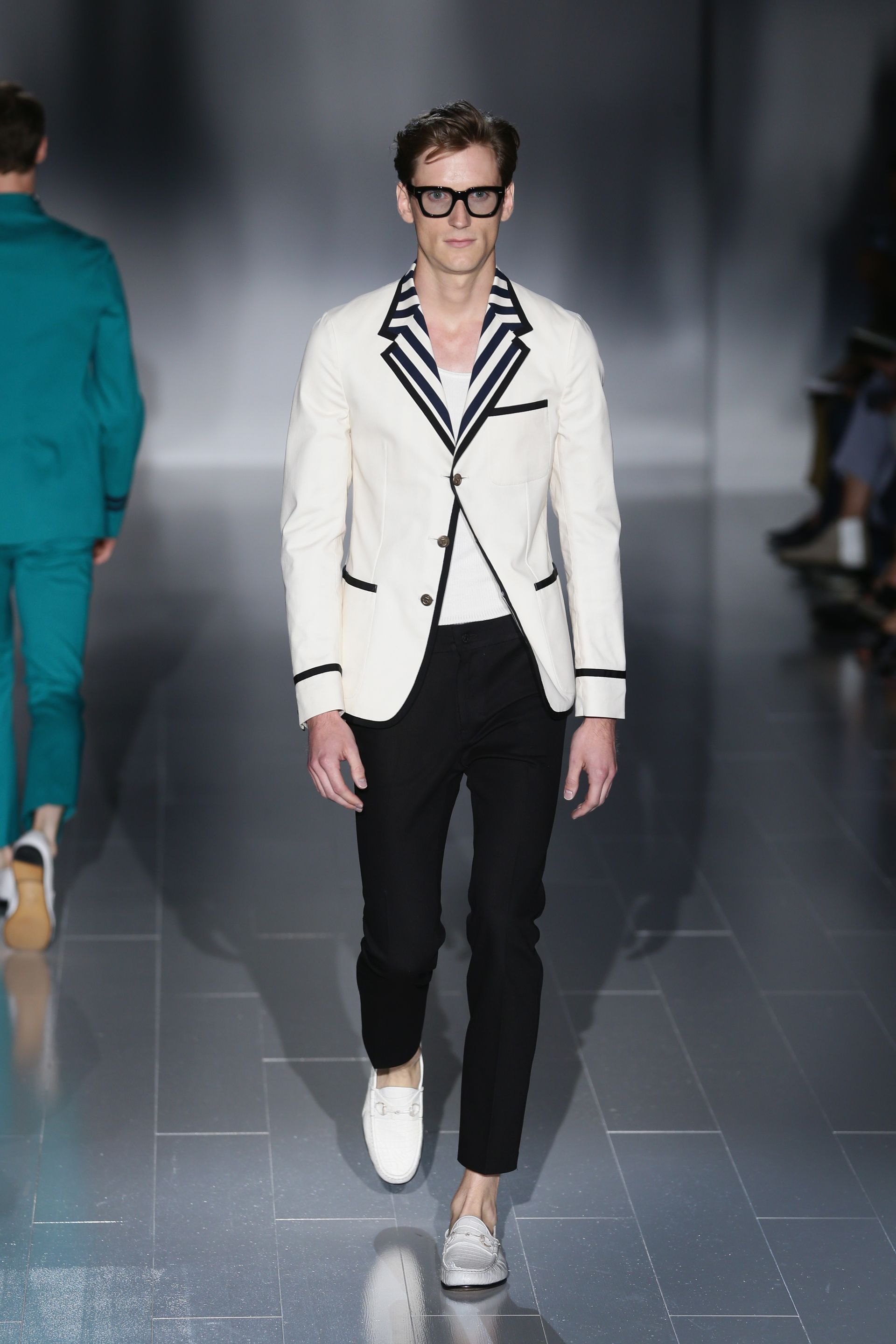 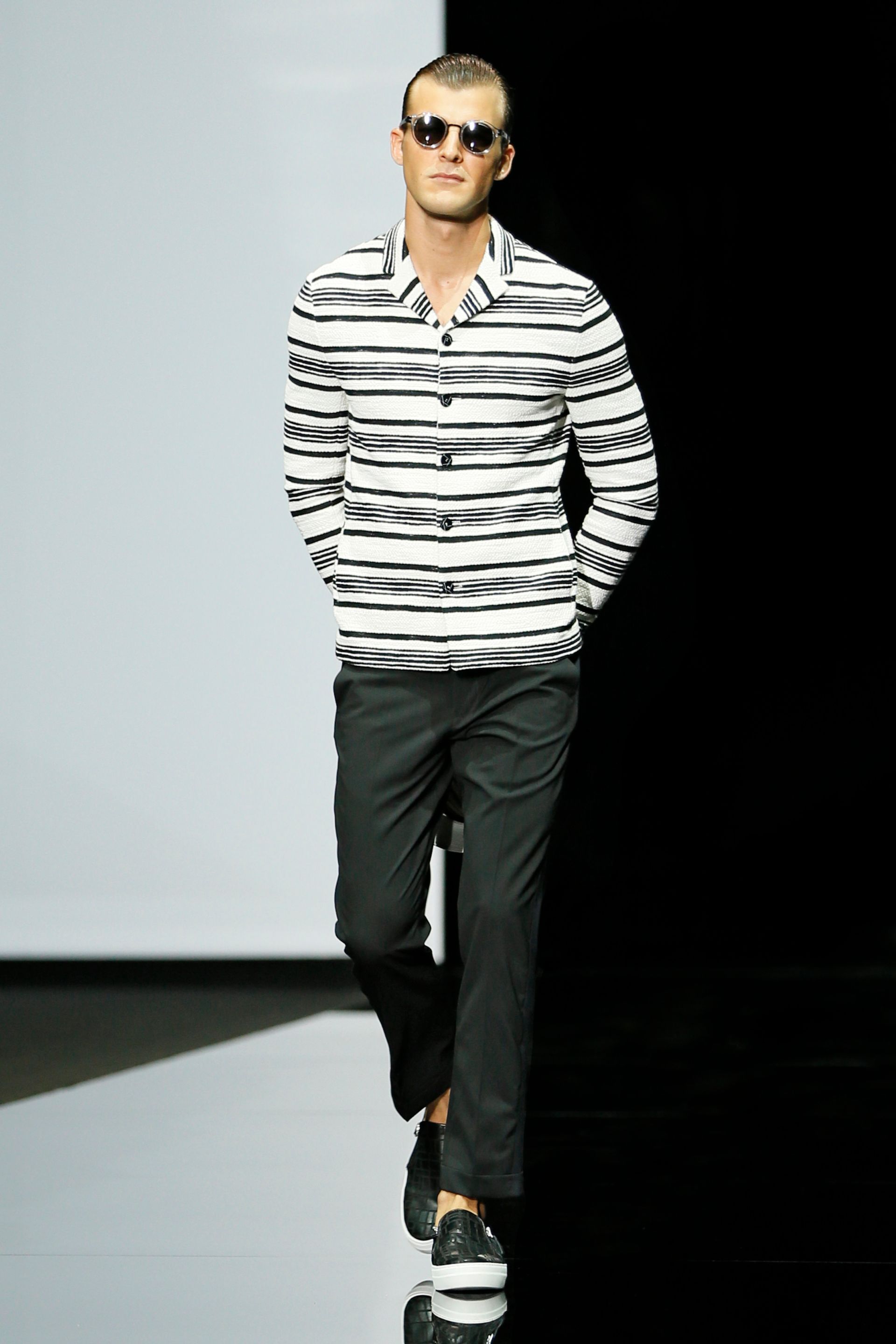 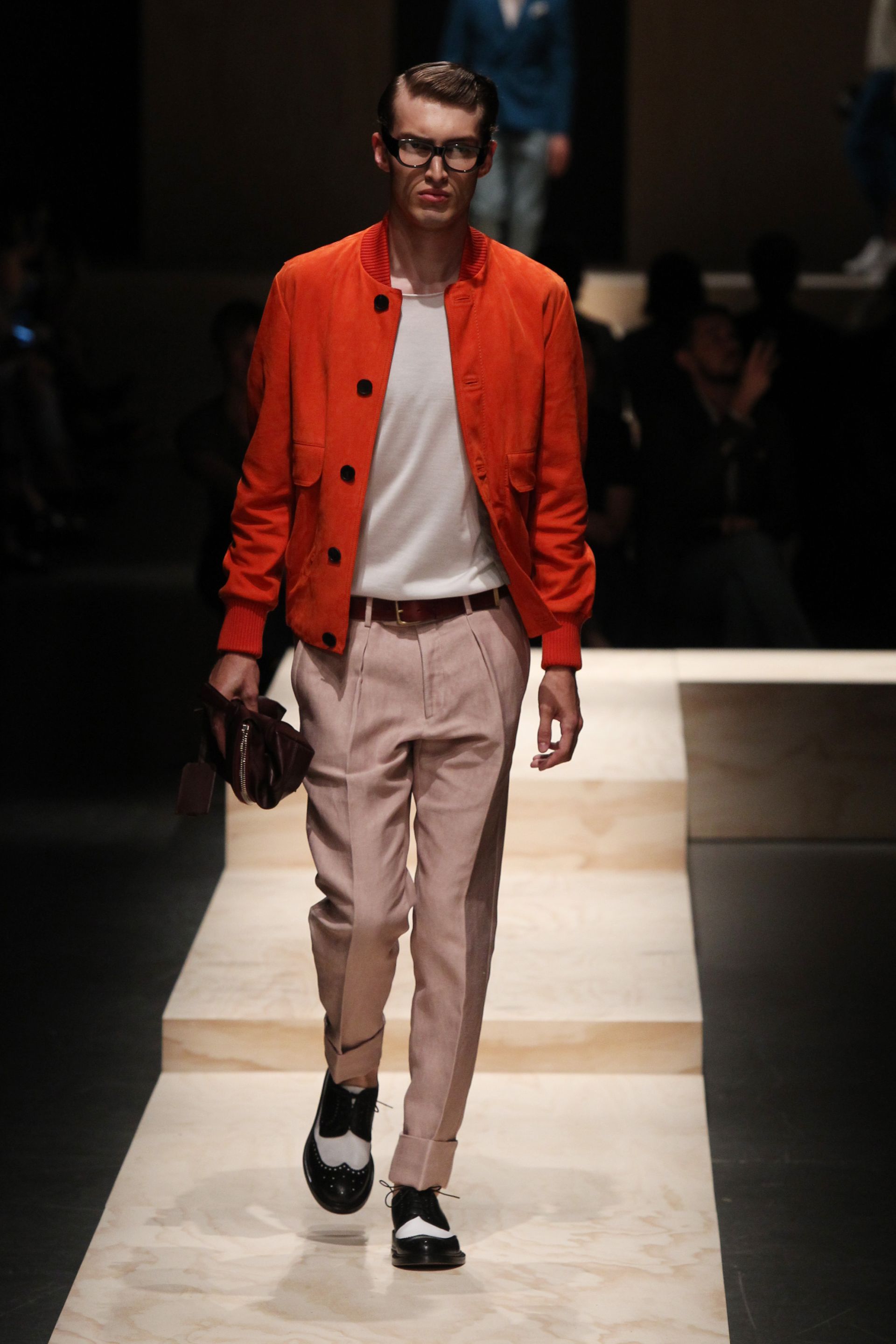 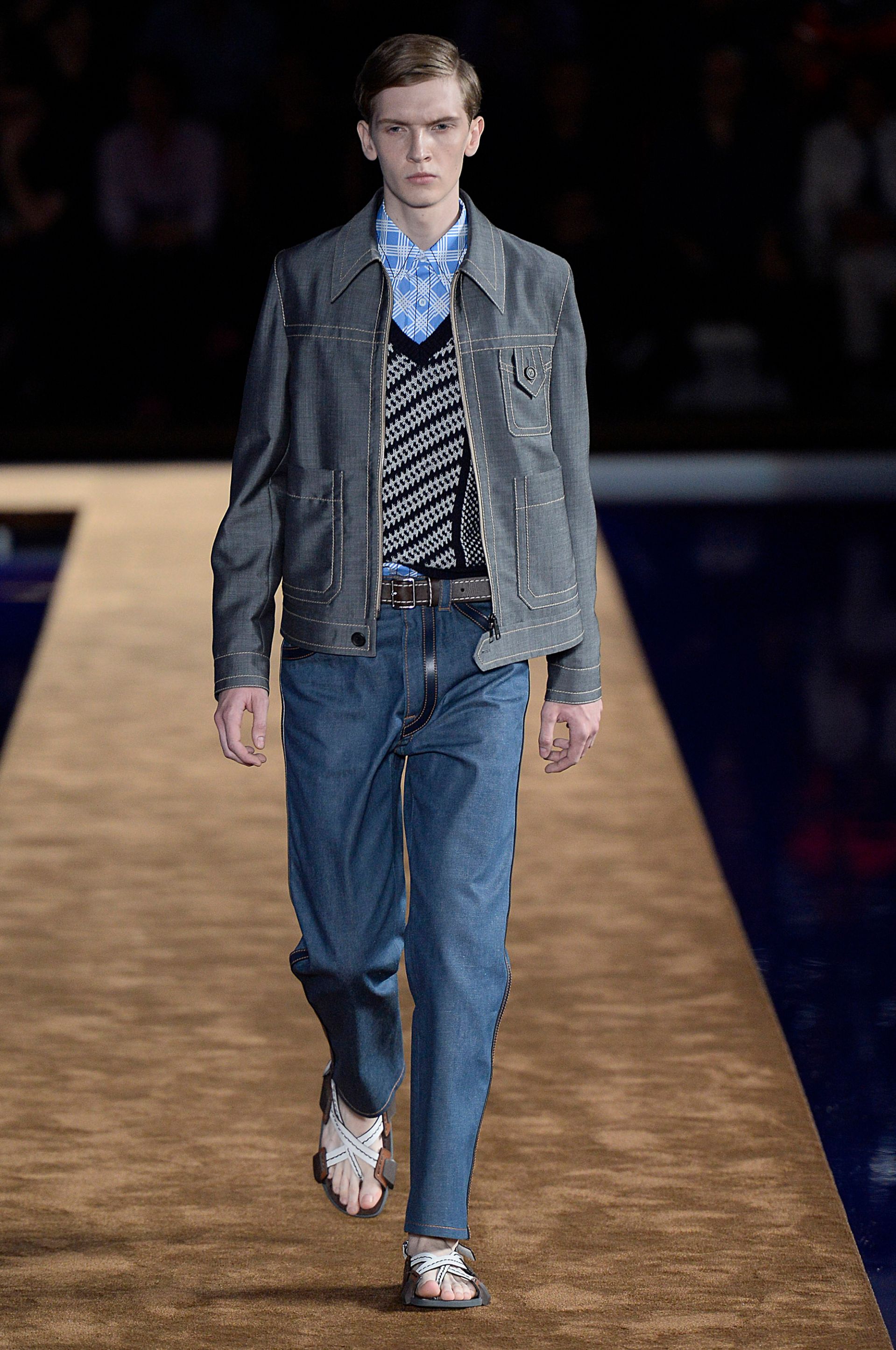 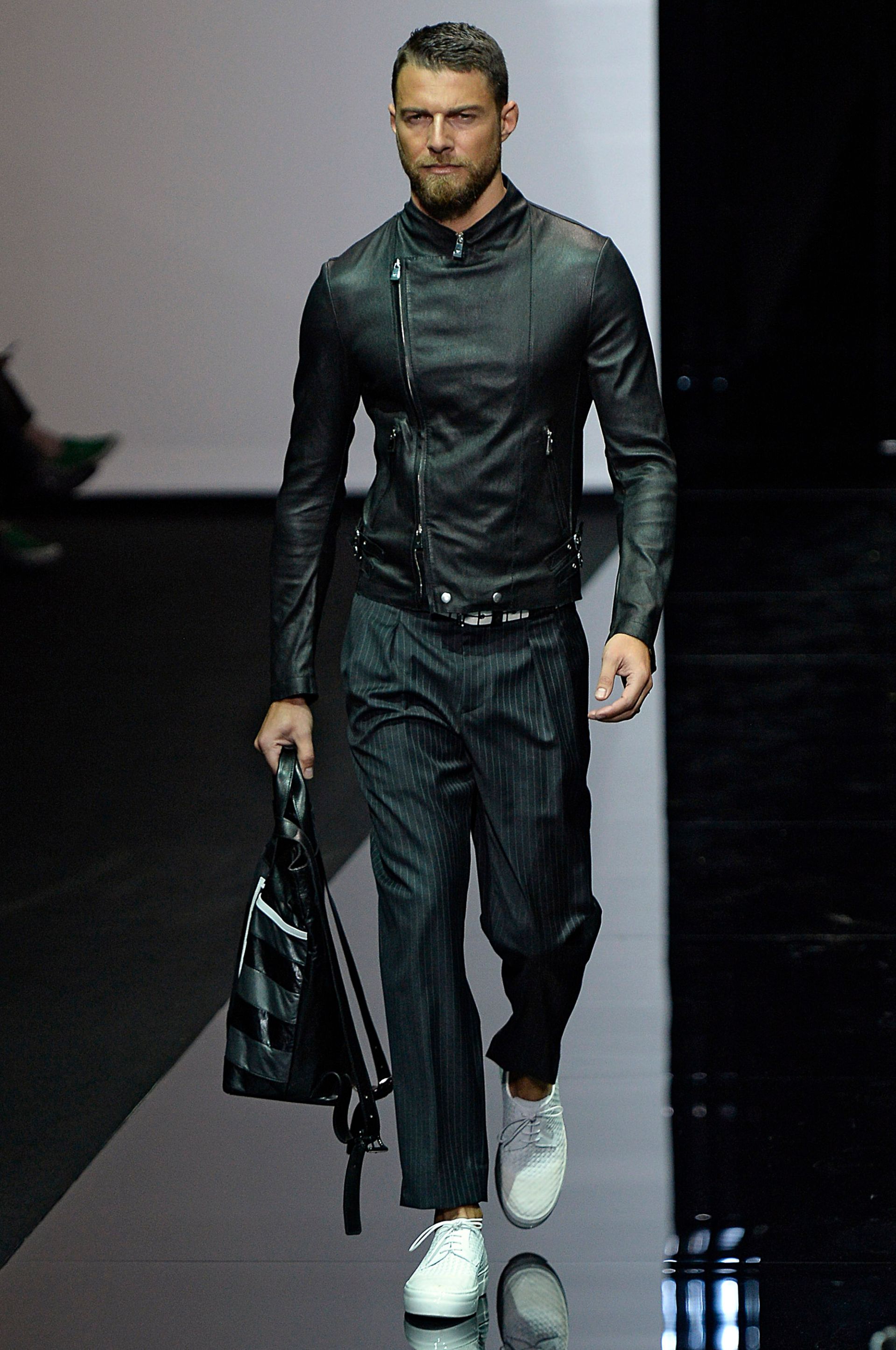 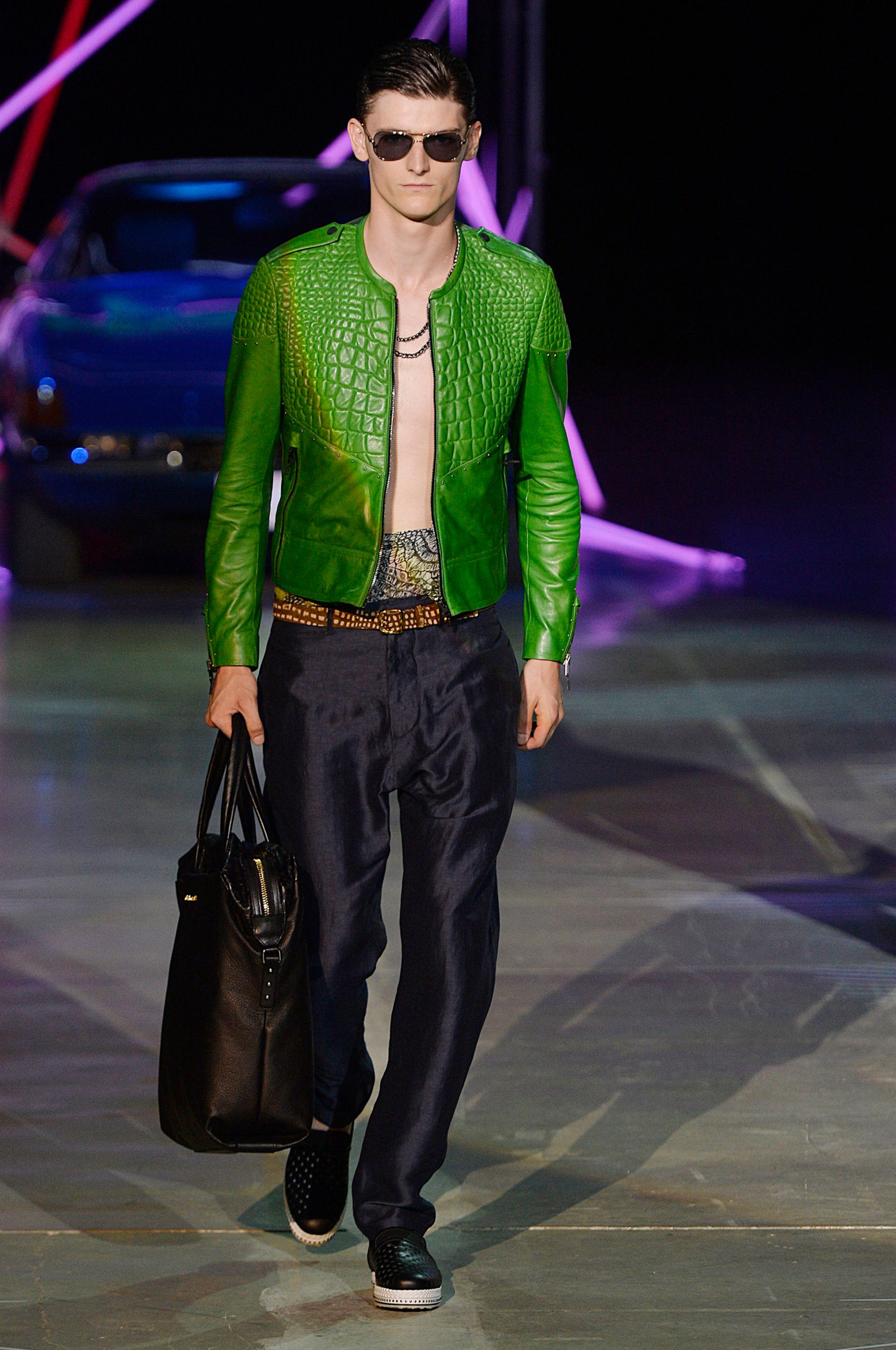 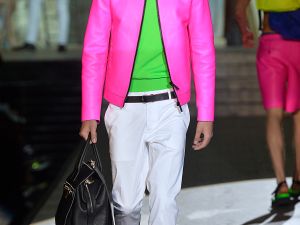 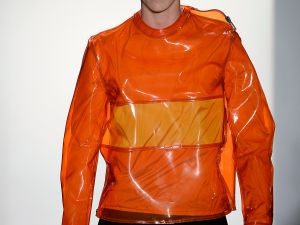 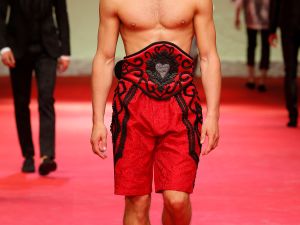 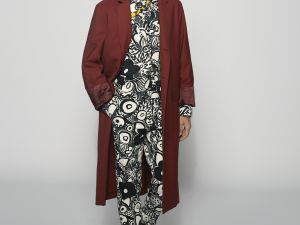 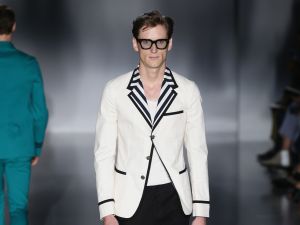 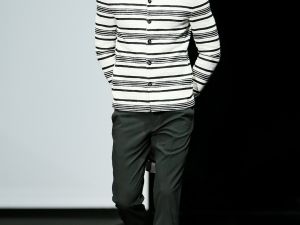 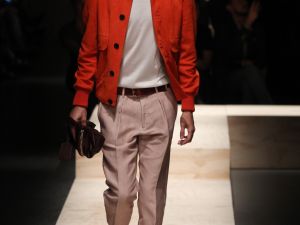 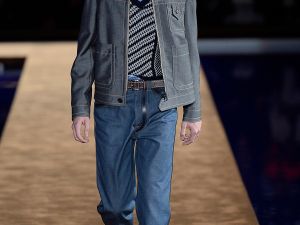 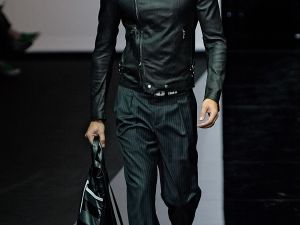 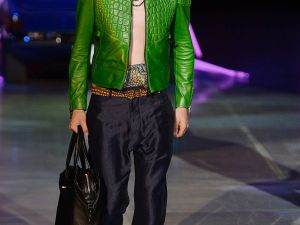 If there is one over-arching trend that has defined men’s fashion for the past five years it has been skinny. Jeans have been drainpipe slim and shirts so narrow it was sometimes hard to even do up the buttons. It was as if menswear designers were cutting back on fabric as a nod to the austere times in which we were living. Yet, like rising share prices, the latest menswear trends from Milan’s catwalks are ditching the lean and mean for something much more extravagant.

Take trousers, which bore the brunt of fashion’s lean look more than anything else. Some were so narrow they caused many a watery eye in those sitting down. At classic suiting label Canali under its new creative director Andrea Pompilio, trousers sprouted multiple pleats and high waistbands just tapering at the ankle to flap jauntily along the runway like so many flags.

The reference is the1950s, preppy college dudes like Richie in Happy Days, these wide trousers looked just so worn with T-shirts and Varsity-inspired jackets and – as a sop to hipsters, perhaps? – nerdy, dark-rimmed eyewear. It was a similar broad-in-the beam trouser shape on Prada’s men’s runway too, here in every shade of denim.

The most obvious sign that there is a new, exuberant confidence in men’s fashion are the pops of eye-searing color. These are not flouro bright shades, rather they have the wattage of neon as if drawing their energy from the national grid. Italo Zucchelli, head of menswear at Calvin Klein, showcased his most bold collection to date with a series of see-thru PVC jackets revealing graphic crewneck tops beneath. Zuchelli’s colors are are so bright you could turn out all the lights and still be seen.

This isn’t color blocking – wearing boldy contrasting shades of pure color like a Mondrian grid painting. This is a single shade worn with neutral trousers or top to give it even more eye-searing punch. At the raunchy Andy Warhol-inspired D Squared show a biker jacket in pink so shocking several editors in the front had to look away. Either that or the near-naked model following proved too distracting.

Biker jackets were a trending too at Emporio Armani in buttoned up shiny black skin and at Roberto Cavalli in unzipped bottle green crocodile leather. For those of us without thousands of dollars to lay down on such a jacket, a similar style may be lurking at the back of our wardrobes only needing a wipe down to be revived. Yet few of us are likely to have anything quite like the bold monochrome graphics presented at Gucci and MARNI. This is fashion as op-art, and yet another assault on our visual sense. If nothing else, you’ll need a giant pair of dark shades to wear next season just to save your eyes from what everyone else is wearing.

Here is a slideshow with some looks from the shows. All photos, unless otherwise stated, courtesy of Getty.