The scene at the Bell House last night in Gowanus felt like the set of a horror movie, teeming with the living dead. But the only zombies in attendance were the members of Brian Fallon’s new band Molly and the Zombies, which made its Brooklyn debut.

Philadelphia-based singer-songwriter Dave Hause, who played next, received a warm, welcome-back cheer from fans who saw him perform in April at the Knitting Factory. He began strumming on an electric guitar—the tone distorted slightly—and switched to acoustic halfway through.

He introduced his keyboardist and younger brother, Tim, and a fan in the audience offered to buy him a drink. When the fan returned from the bar with a shot of whiskey, Dave said, “Tim’s not 21 yet, but don’t worry, I got it,” and knocked it back.

Loosened up by the liquor, Dave went on to introduce his buddy, Mr. Fallon, who was enthusiastically received. Mr. Fallon is known for not being able to sit still in between tours with his New Jersey band, The Gaslight Anthem; his new project is a product of that restlessness.

The sound is a departure from the anthemic blue-collar Jersey rock that he writes with Gaslight and the dark soul sound of his previous project, The Horrible Crowes. Molly and the Zombies is Mr. Fallon’s foray into folk-rock, aiming for a Bob Dylan vibe. He enlisted the help of guitarist Brian McGee (solo artist and frontman for Delaware band Plow United), bassist and back-up vocalist Catherine Popper (of Ryan Adams and The Cardinals) and drummer Randy Schrager.

The Dylan influence runs deep, so much so that the band took a break from its set to play a cover of Mr. Dylan’s “Ballad of a Thin Man.” The covers were necessary; Molly and the Zombies is such a new project that the band only has five songs recorded.

To round out the set, Mr. Fallon stepped back as Mr. McGee performed two songs off his newly released album, Ruin Creek. The zombie theme wasn’t totally lost, though: the band closed the night with a cover of Roky Erikson and the Aliens’ “I Walked With a Zombie.”

Fitting for a band that lists “brains” as its only influence. 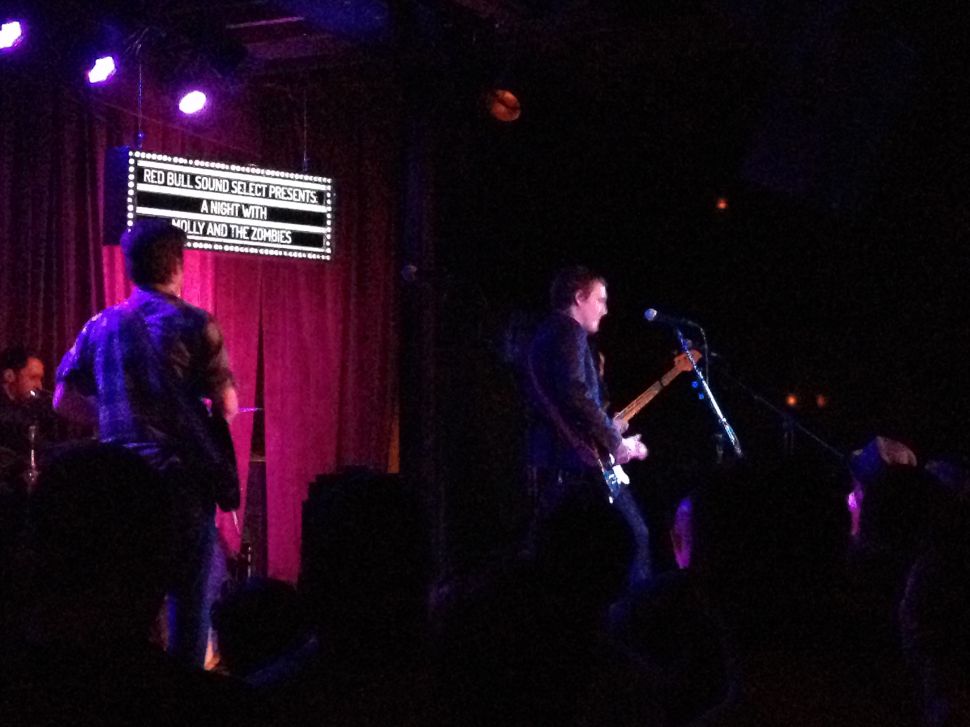