Most New Jerseyans say that military service imparts a variety of marketable skills, but that veterans face a difficult time translating that experience into a job offer.  The Monmouth University/Asbury Park Press Poll also finds that many state residents feel that PTSD – post-traumatic stress disorder – plays a role when employers consider whether to hire recent combat veterans.

Fully 8-in-10 (81%) New Jerseyans say that veterans of Iraq and Afghanistan have a difficult time landing a job when they return home.  Only 6% believe they have an easy time finding employment.  This comes despite the fact that 73% believe the skills and leadership learned in military service can be applied in a variety of work settings. Only 16% say that those skills apply mostly to military situations.

Only 1-in-3 (33%) Garden State residents believe that private employers are eager to hire veterans from Middle East combat zones.  A plurality of 47% say that employers are generally reluctant to hire these vets.  Another 20% are unsure.  More than 3-in-4 (77%) Garden State residents say that the country is not doing enough to help these recent veterans return to the workforce.

“New Jerseyans see the value in the skills obtained through military service but also say that employers feel this experience comes with other issues that could negatively affect workplace performance,” said Patrick Murray, director of the Monmouth University Polling Institute.

One of the major issues facing returning vets is PTSD or post-traumatic stress disorder.  About 7-in-10 New Jersey residents believe that at least one-quarter of those who served in Iraq and Afghanistan probably suffer from PTSD.  This includes 47% of state residents who say at least half of returning vets are affected and 22% who say between a quarter and a half are affected.

Most (58%) New Jerseyans believe that PTSD can be successfully managed, while 30% say it is difficult to treat successfully.  This may factor into employers’ thought process.  Just over 4-in-10 (42%) residents believe that concerns about PTSD are a major factor when employers consider whether to hire a recent veteran.  Another 38% say these concerns are a minor factor.  Just 11% say they are not a factor at all.

Interestingly, there are no significant differences in any of these survey results based on whether the person has a close friend or family member who served in the military in Iraq or Afghanistan, has an acquaintance who served, or does not know anyone personally who recently served in a combat zone.

Monmouth University/Asbury Park Press conducted the poll by telephone with 803 New Jersey adults from February 19 to 23, 2014.  This sample has a margin of error of + 3.5 percent.  The poll was conducted by the Monmouth University Polling Institute and originally published by the Asbury Park Press and its sister publications (Courier-Post, Courier News, Daily Journal, Daily Record, and Home News Tribune). 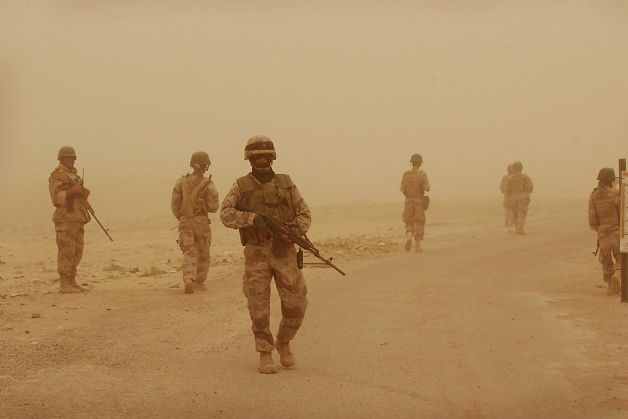