A spokesman for the Metropolitan Transit Authority confirmed today that the proposal to bring a food hall and Nordic themed restaurant to Grand Central has been approved by the board. It will open as early as 2016.

“This new food hall will be a great addition to the already robust array of food offerings at Grand Central.  We are looking forward to signing the lease and allowing construction to proceed,” MTA spokesman Aaron Donovan told the Observer.

As per the proposal— which was unveiled Friday– a Nordic-themed food hall will occupy the grand yet currently empty Vanderbilt Hall. Set to include numerous take-out options, there will also be a fine-dining brasserie run by Danish restauranteur Claus Meyer for the foodies. Mr. Meyer’s Copenhagen restaurant Noma was voted best restaurant in the world by Restaurant Magazine for several years.

“Grand Central Terminal, one of the city’s most bustling hubs, is the perfect venue for the delicious and unpretentious food Nordic cuisine is based on,” Mr. Meyer wrote on his website today. “The two are made for each other – fresh, vibrant, egalitarian – and our Danish team is delighted to come not just to New York but to this specific location.”

Because of Grand Central’s landmark status, the structures of the food hall will be free-standing and able to be removed if needed.

The Observer thinks Nordic food is here to stay. 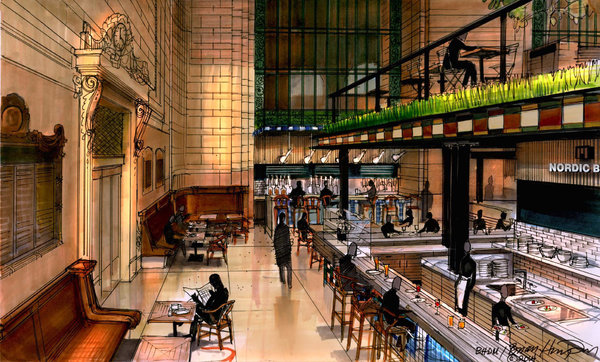