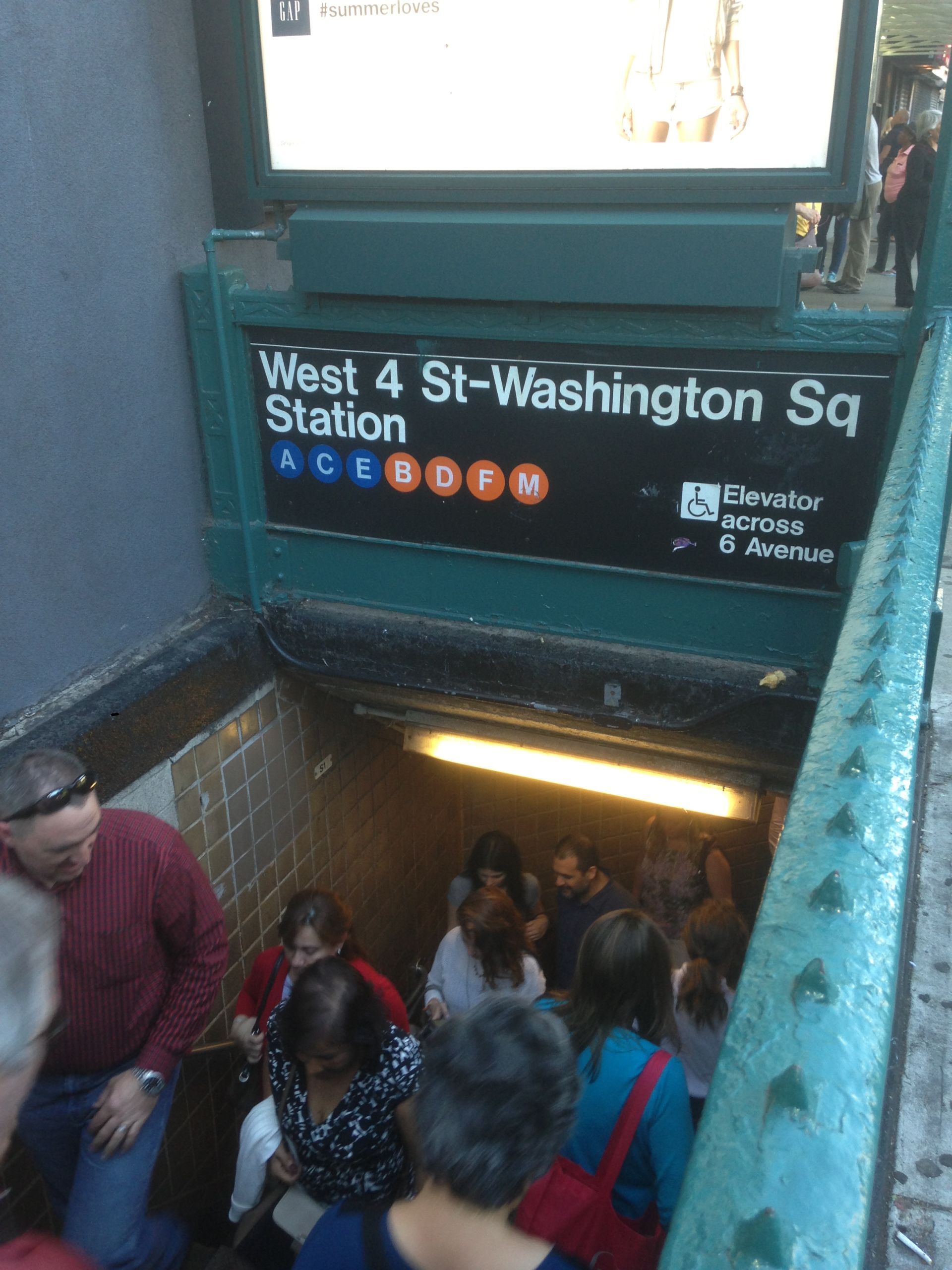 Stop 1 – West 4th Subway Stop (seen in opening credits): This subway stop, situated at W. 3rd Street and 6th Avenue, can be seen as Louis C.K. first appears in the opening credits of Louie. The stop is the natural place to begin my tour. I can’t really help feeling a little bit of New York pride seeing my first location in person. Which naturally makes it pretty uncomfortable to take a picture of a subway stop. Nothing quite says “I’m kind of, sort of not actually from New York ” like snapping a picture of a random subway stop on your iPhone. “It’s for a story,” I remarked to one of the many people milling about the crowded stop. He ignored me. Moving on.
dispatches 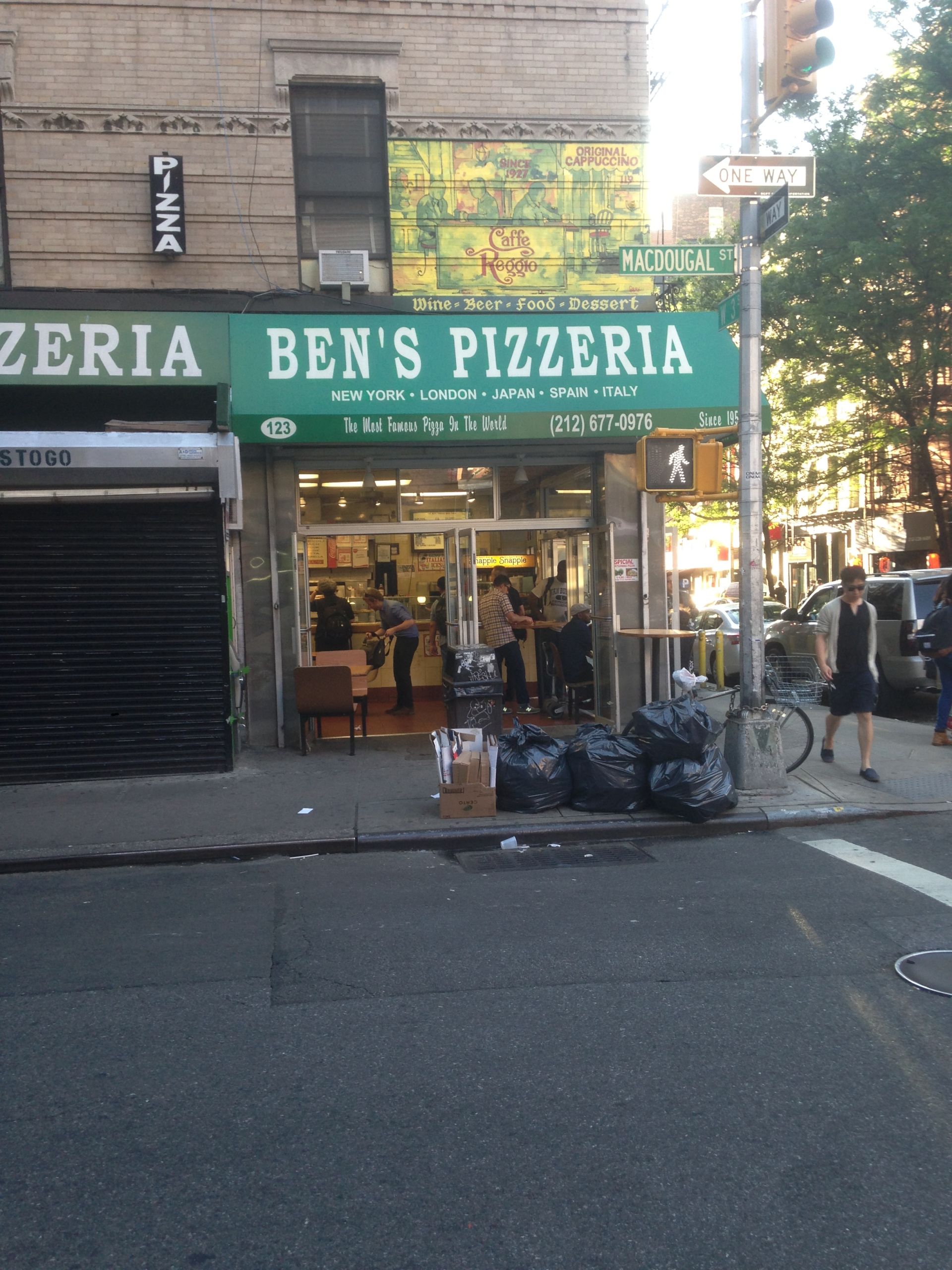 Stop 2: Ben's Pizzeria (seen in opening credits): Just a few short blocks away from the West 4th stop is Ben's Pizzeria on 123 MacDougal Street. Mr. CK stops briefly in the opening credits to grab himself a slice. Which is exactly what I did. The place itself is nothing special. Not that it probably matters to the people who leave the countless adjacent bars at 3 am looking for a lifesaving slab of grease. But I ate that slice all the same and felt pretty good about myself. This was going good so far. Which is exactly how opening credits are supposed to be. Upbeat. Until, you know, the actual show.
dispatches 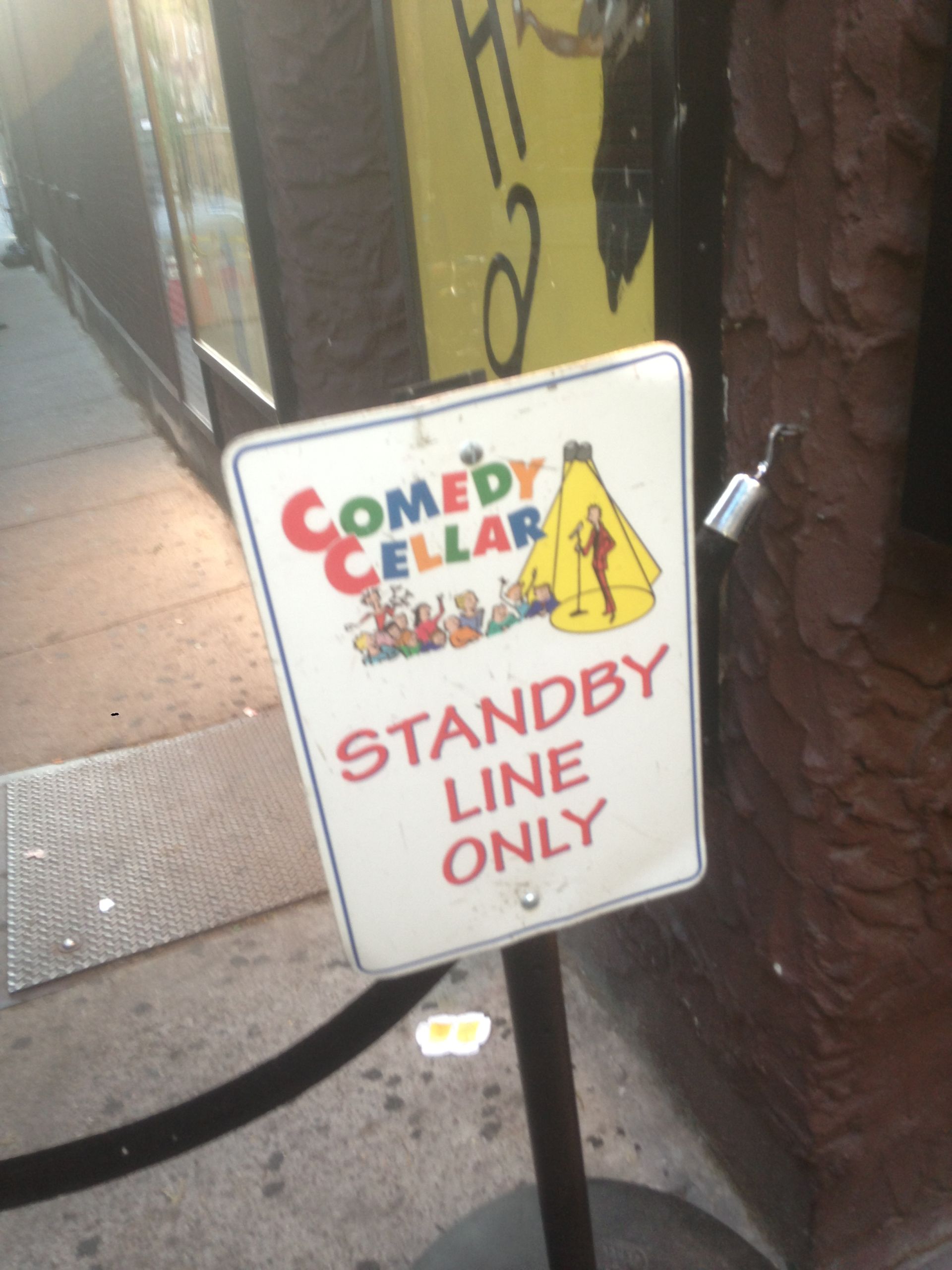 Stop 3 - The Comedy Cellar (seen in opening credits and many show openers): The next stop is The Comedy Cellar at 117 MacDougal Street, the home to many of Mr, CK's show opening sets. Just kidding. I didn't make a reservation mostly because this was poorly planned. The bouncer at the door was unsympathetic, and I found myself in the standby line right around the corner. I decided to use this time to get some cool man-on-the street interviews, get some real-world perspective on what a Louie walking tour should be like. I turned to the one other person in the reject standby line with me. He told me he was Daniel from the Upper West Side. I asked if he was a fan of Louie. "Never heard of it. Is that on TV." Well, shit. "I'm not much of a TV watcher," Daniel from the Upper West Side continued apologetically. "I mostly just fall asleep to the news."
dispatches 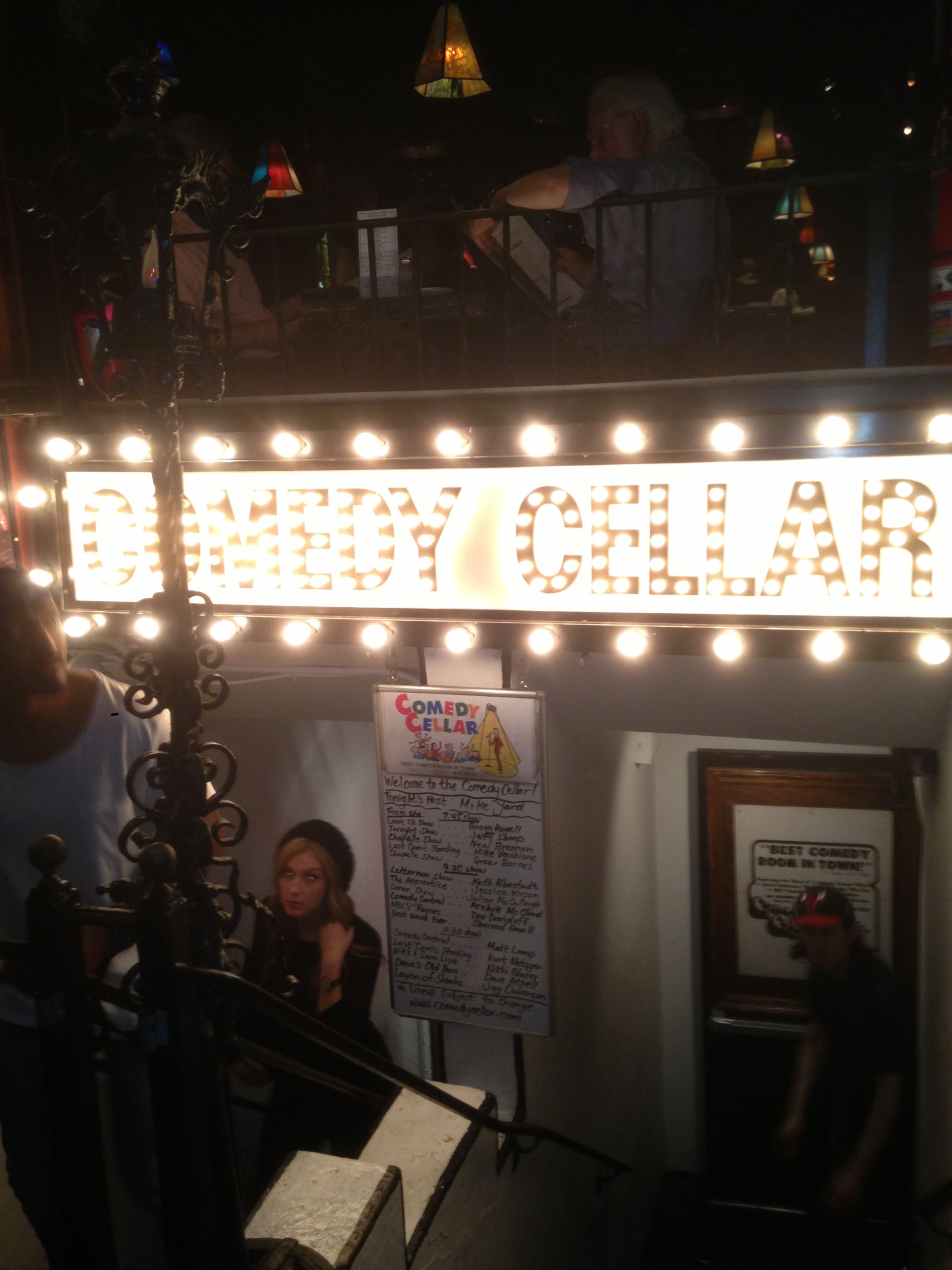 After about 45 minutes standing around the corner I was finally led to a seat in the cellar. Apparently the standby line is filled with diseases because I'm pretty sure I was put in a quarantine area. My seat was in the most secluded of corners, in the darkest of spots, situated between a medley of couples. Did I mention I was alone? The Comedy Cellar has a strict no picture policy, but close your eyes and picture the back of a head. That should give you an idea of my view. The comedy club also has a strict two item policy. Because "hey I'm sitting alone in a dark corner of a comedy club" my two items were both full pitchers of beer. Have I mentioned I was alone?
dispatches
Advertisement 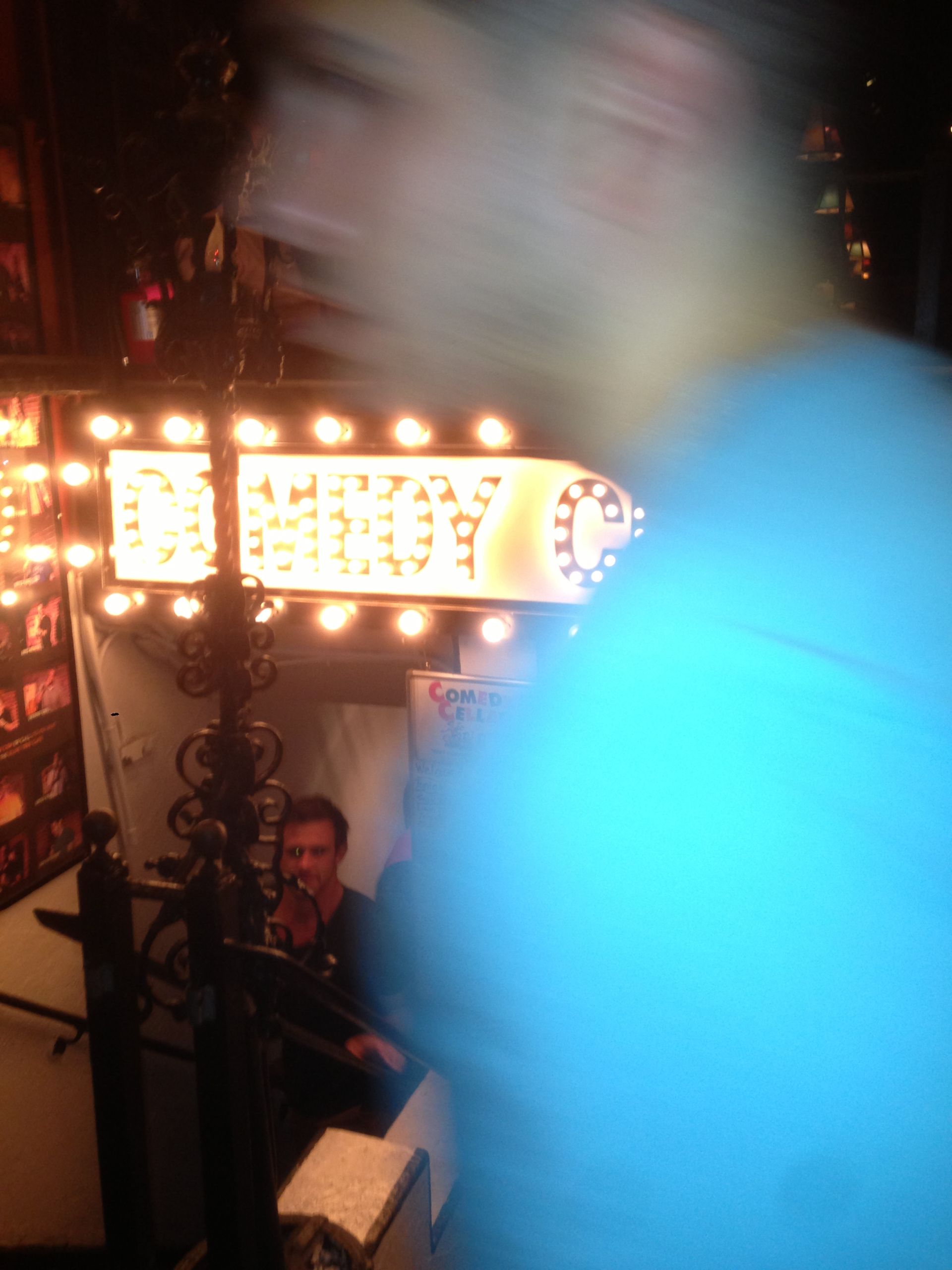 Totally, completely unrelated to the beer pitchers, this was my first attempt at taking a picture after the show.
dispatches 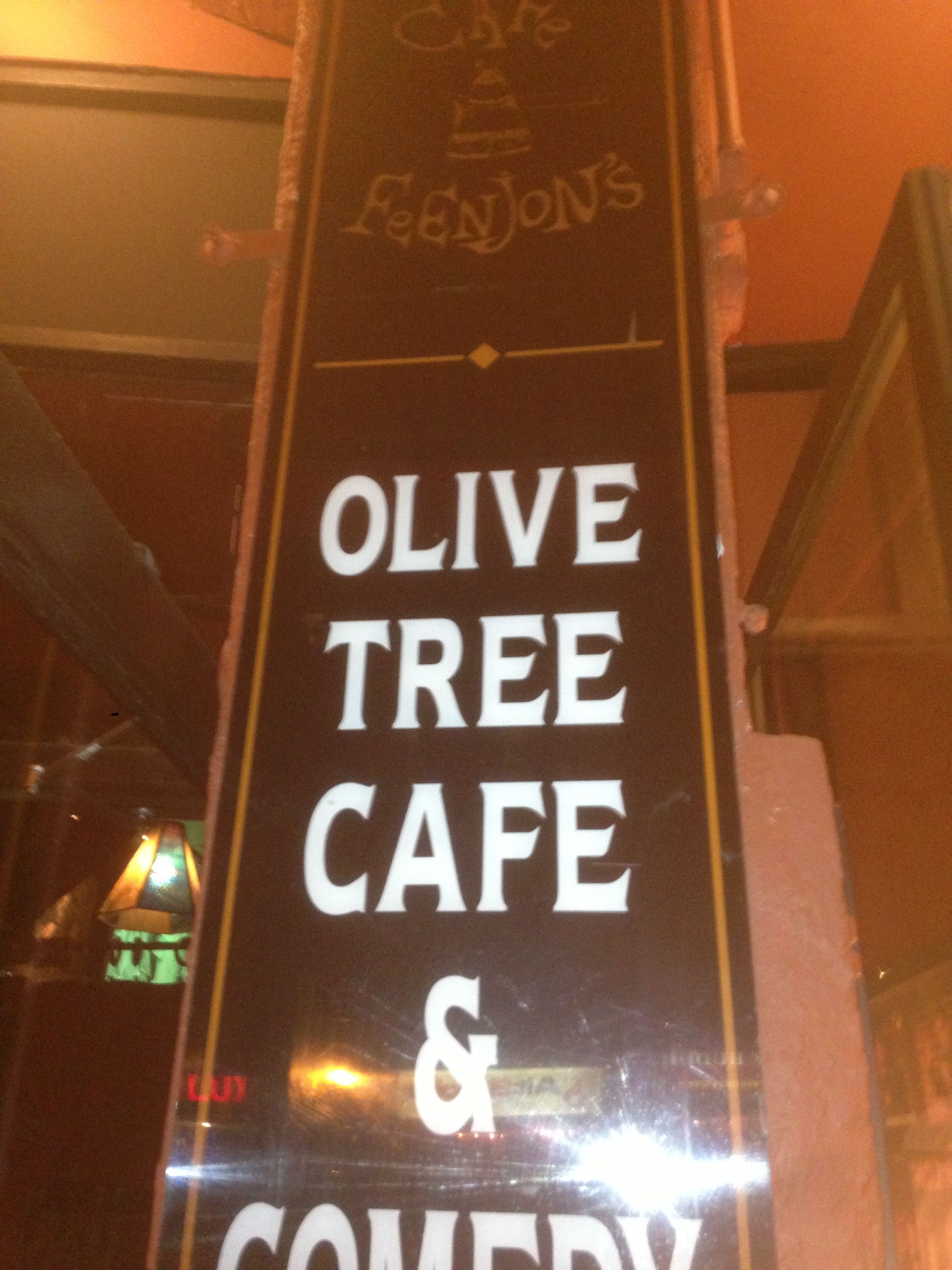 Stop 4 - Olive Tree Cafe (Seen in S01E03, "Dr. Ben/Nick"): I wumbled (walk/stumbled) up after the show to the Olive Tree Cafe, situated right above the Comedy Cellar. Louie fans will recognize it as the place where Mr. CK sent comedian Nick DiPaolo to the hospital in season one. Unfortunately, I didn't send any well known comedians to the hospital. I did however eat an entire Mediterranean platter by myself. Yes, I had eaten pizza less than two hours ago. But as Mr. CK has said himself, "The meal is not over when I'm full. The meal is over when I hate myself." On a scale of one to hating myself, I was set pretty firmly at a "eating my second meal of the night, alone and half-drunk." Good thing the tour was only half over.
dispatches 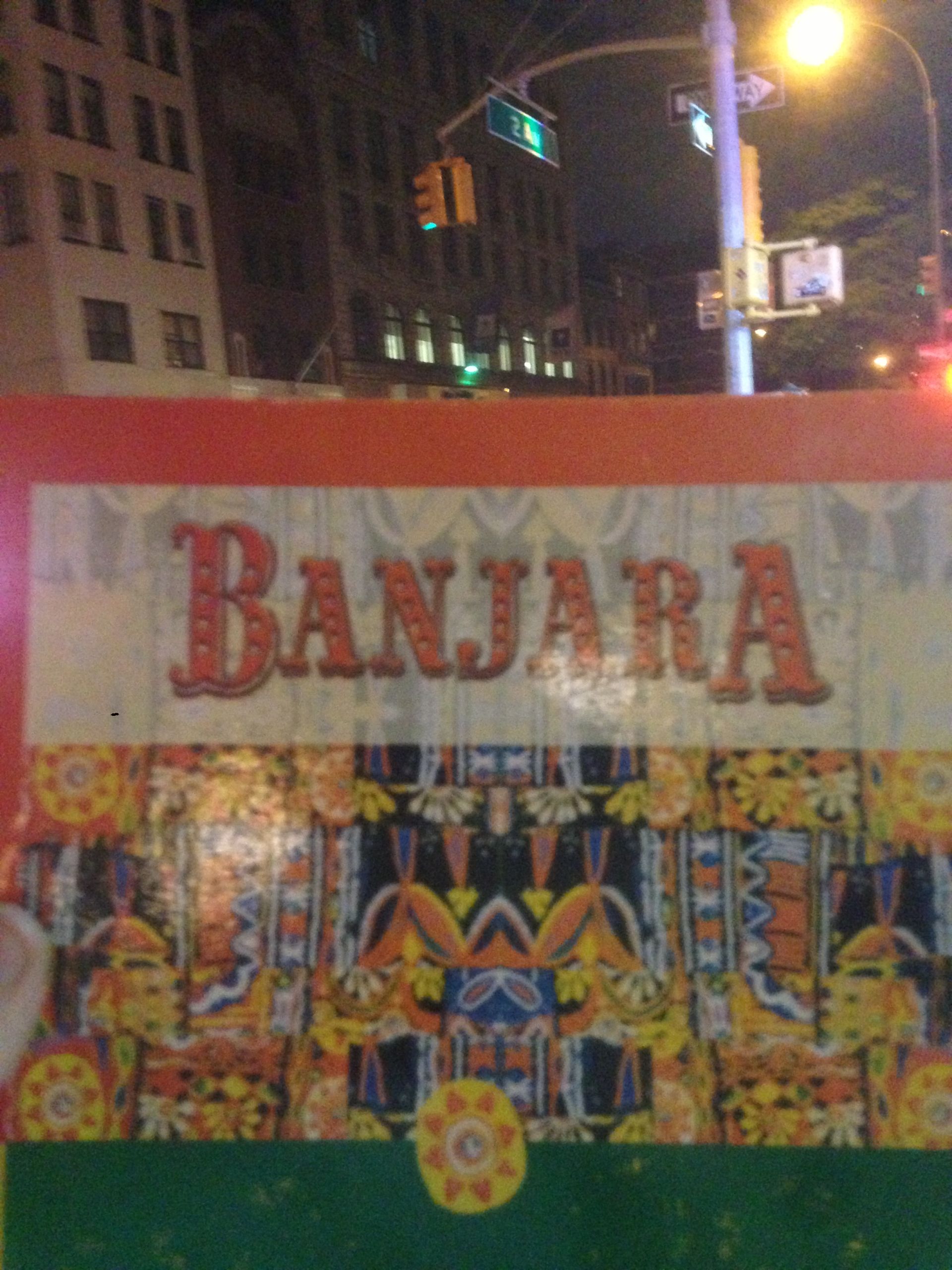 Stop 5 - Banjara (seen in S04E03, "So Did the Fat Lady"): Banjara, at its new location at 100 2nd Ave, is best known as the first half of Mr. CK and his brother's (played by Robert Kelly) bang-bang ritual, in which they eat two dinners back-to-back. I decided, for the sake of this tour and not for my health, to do my own bang-bang because it would be funny and good for the story and dear God why did I decide to do this fifth? Why did I think that was a good idea? I arrived at Banjara and asked for outside seating because it was a lovely night/there was a good chance I throw up. I ordered Dhakshin Se Shuru. What is Dhakshin Se Shuru? Fantastic question. I still don't know. As I quite painfully made my way through the first half of my bang-bang, my third meal of the night, I decided to at least ask my waiter if he knew anything about Louie filming at Banjara. "No, no, no. no," he replied an unnecessary amount of times. "I was not here." My interviews, much like the Dhakshin Se Shuru, were not going down well.
dispatches
Advertisement 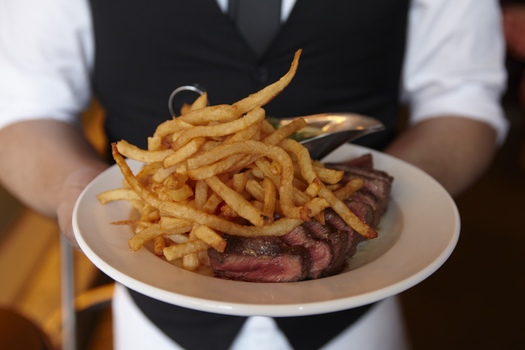 Stop 6 - Bowery Diner/Chez Zef (seen in S04E03, "So Did the Fat Lady") Step two of the bang-bang. Sidenote, bang-bangs are a bad idea. I shuffle in to Chez Zef, on 241 Bowery Street. When it appeared on Louie it was known as the Bowery Diner, but has since been re-branded with some French flair. Full disclosure: I totally didn't take a picture at Chez Zef. Maybe it was the Comedy Cellar pitchers catching up to me. Maybe I suffered a concussion after slamming my head on the table when my much-unwanted food arrived. I truly may never know.
dispatches 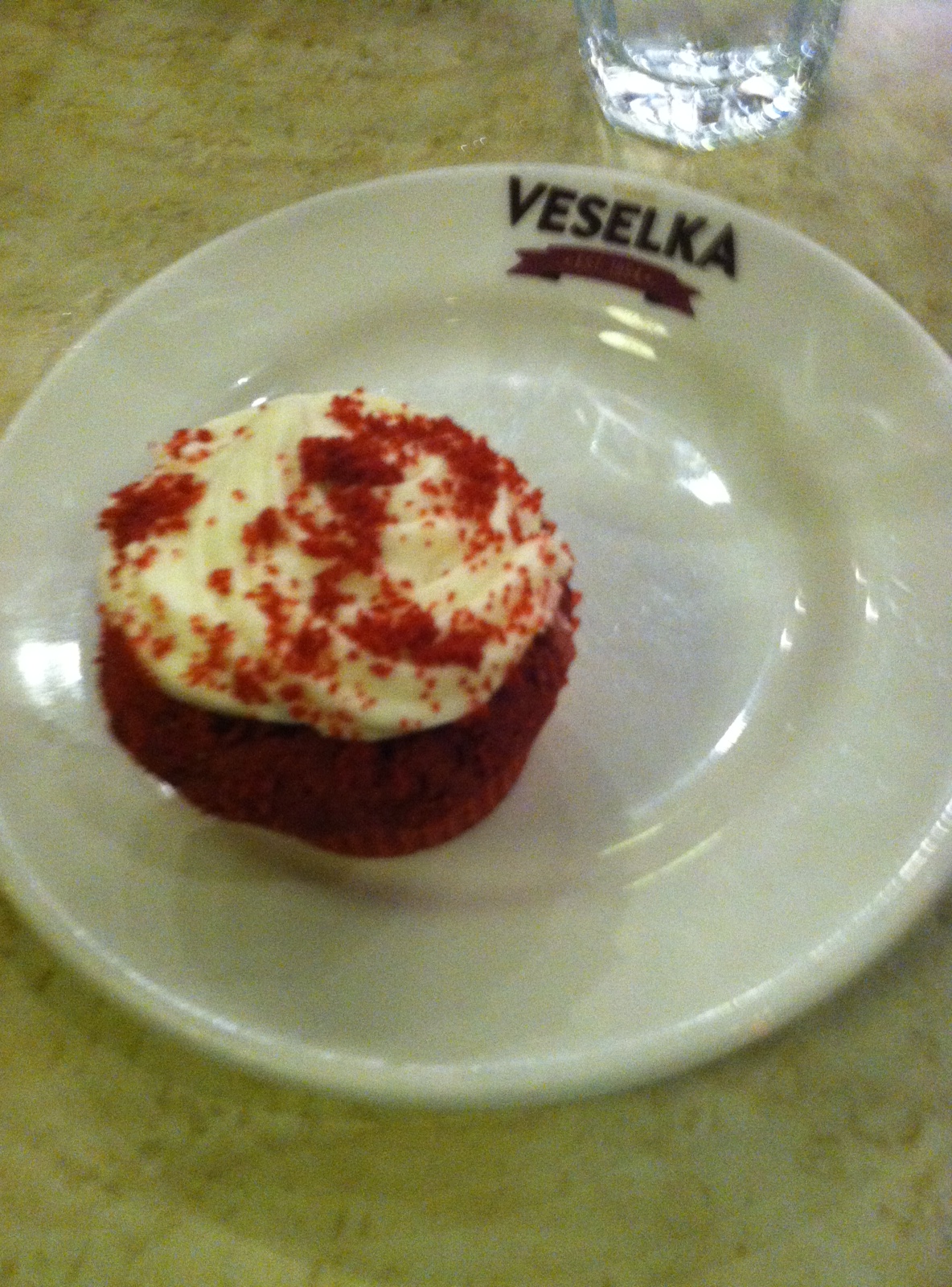 Cupcake at Veselka
Stop 7 - Veselka (seen in S01E13, "Night Out"): In the season finale of Louie's first season, Mr. CK finds himself getting breakfast with his daughters at 4 in the morning at this 24-hour Ukrainian eatery on 144 2nd Ave. So too did I end my night at Veselka, right around 2 a.m. I only had the will-power to order that solitary cupcake to the left over there. It took me about a half hour to finish. My waitress was a pretty blonde with the interesting name of Karlyn. She was from New Jersey. She would probably be out of my league on a night that I only ate one dinner. But I pressed my luck, for the sake of this tour. I asked if she ever heard of Louie. She replied, "Yeah. I love Louie!" Wait, what? What about the idea of a Louie walking tour. "Yes, definitely, that would be really cool." Huh. How about that. Even after being inhumanely full, slightly buzzed, and alone at the early hours of the morning, I managed to find one glimmer of positivity at 2 in the morning. In terms of an episode of Louie, I nailed it.
dispatches 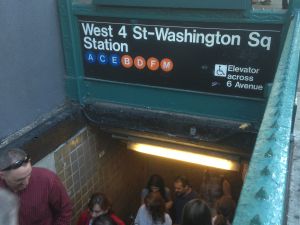 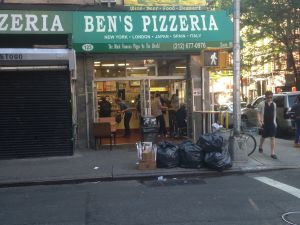 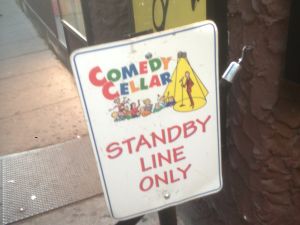 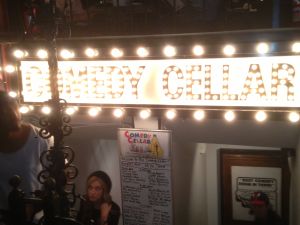 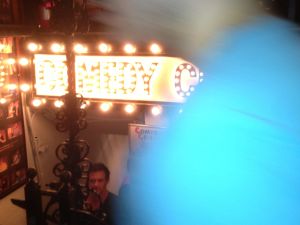 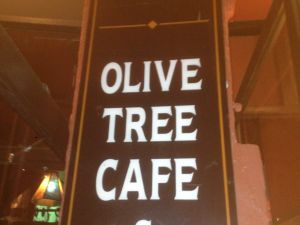 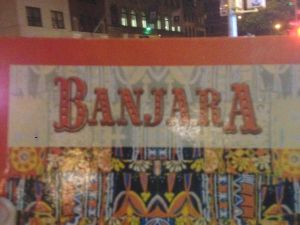 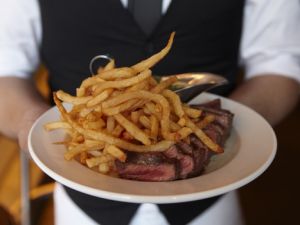 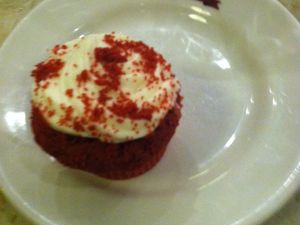 Walking tours allow fans the chance to scout the backdrops of their favorite scenes and episodes, going on foot to shoot locations and cast hangouts. A chance not only to see the world of your favorite show, but immerse yourself in it. Sex and the City has one, and it is glamorous. So does GIRLS, and it is just downright Brooklyn quirky.

So there I am sitting with my journalism cap on, thinking, what would a Louie walking tour look like? You know, the Louie that is filled to the brim with dark, self-loathing humor and cringe-worthy awkwardness. What would it be like to immerse myself in that world? Only one way to find out. I embarked on a seven-location journey not only visiting the sites that Louis CK used for the show, but also re-enacted some key moments.

Let’s just say, it isn’t easy being Louie. But let’s not get ahead of ourselves.