The self-proclaimed Nazi cab driver, who while driving has worn an armband featuring a swastika, has his license back, but he still isn’t welcome at his garage, the New York Post reports.

Gabriel Diaz was suspended on May 9 after multiple complaints from pedestrians and drivers. The Observer reported last month that the Anti-Defamation League (ADL) joined in, urging the New York City Taxi and Limousine Commission (TLC) to investigate and ultimately suspend the 27-year-old driver.

Diaz, a Bronx native of Dominican descent, got his credentials back on June 9, but when he returned to work at his garage in Queens, Ted Strauel, president of the Long Island City garage Team Systems, told Mr. Diaz to stay away.

“We told him he was better off going to work somewhere else,” Mr. Strauel said. “He’s not working here, he’s not going to work here.”

The ADL said once Mr. Diaz served his suspension and stops wearing the armband, he can continue work as a cabbie.

“As long as he doesn’t wear a hate symbol in the cab, he has the right to drive a cab,” said Evan Bernstein, the regional director of the League. “We hope he can learn.”

Diaz was not available for comment, but his father said that, “he doesn’t have a problem now.” 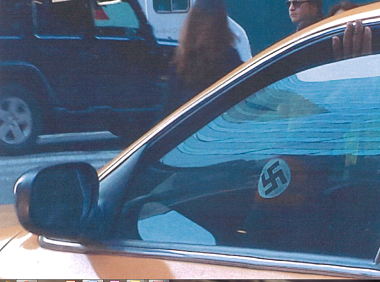