TRENTON – Citing a desire to enhance their ability to press forward on key issues affecting their community, a group of some of New Jersey’s most prominent African-American legislators and community organizations announced the creation of a strengthened leadership coalition designed to develop a shared platform to address African-American concerns.

“We are motivated more now than ever before to continue to fight to effect change in the lives of those that we serve,” said newly-elected National Association for the Advancement of Colored People (NAACP) New Jersey State Conference President Richard T. Smith at a State House news conference on Thursday. “The leadership of our organizations may change, but our mission always stays the same.

“We’ve established our headquarters here in the state’s capital that will give us a broader governmental presence. In that way, we can have more impact on public policy,” continued Smith, standing alongside New Jersey Black Issues Convention President Reva Foster and other community leaders. “We intend to be more proactive and to be present when legislation is being authored, clearly expressing what it is that we are for, instead of coming in on the tail end of the conversation after the legislation has passed, discussing what we are against.”

The coalition expressed its desire for legislators to act on certain key initiatives of particular interest to the African-American community. These measures include the restoration of $1.9 million to the Educational Opportunity Fund (EOF) budget; the passage of S966 to establish procedures for the closure of a public school (in its original form); the passage of the Opportunity to Compete Bill (S2124) and the passage of SCR 62 creating the Joint Committee on Economic Justice and Equal Employment Opportunity.

“I don’t mean to offend anyone, but it reminds me of the plantation,” said state Senator Ron L. Rice (D-28). “[My colleagues] are trying to move a fracking bill, which is not a bad bill. But I’m not trading off fracking with whipping people and keeping us in jail. You know a bill is bad, you know it’s especially bad for minorities, but you’re just going to get whipped anyway, because you have to live in that environment. That was the mentality back during slavery, and I have a real serious problem with that mentality.”

Steele told PolitickerNJ.com that the problems facing African-Americans should be looked at with a broader perspective.

“It’s our problem today, but it’s your problem tomorrow,” Steele said. “Within 10 to 15 years, you’re going to have most of your traditional colleges either out of business, or in bankruptcy. That’s a fact,” Steele said. “How are you going to educate our young folks? Education is the new civil rights fight.” 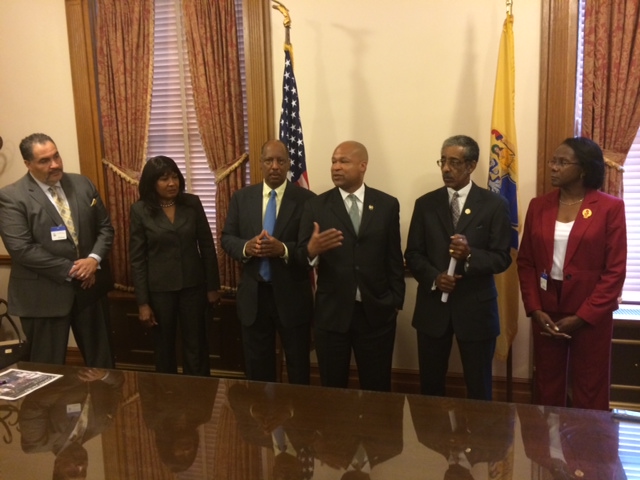