Recapping is a hard job, probably harder than people realize. It’s an inherent Catch-22, always: Because your audience is either people who have watched the episode (in which case, they don’t need to know what happened), or they haven’t watched it (in which case, they don’t want to know what happened), recapping has veered toward existing either in academic parsing, moody thought pieces and the occasional brilliant bit of straight satire. If you think you can do this job better, email me. Seriously, email me.

But the fact that it’s hard is no excuse for being wrong, though that will occasionally happen as part of the job. But sometimes the misinterpretation of the facts presented in a certain show is so egregious, it demands explanation. For instance, did The New York Times‘ recapper Kate Zernike REALLY not understand what was happening with Big Boo and the dog in the first episode of this season of Orange is the New Black?

“Speaking of Big Boo,” Ms. Zernike writes in her recap of the second episode, “Can anyone explain what happens with the dog? Are we to believe she chokes him by feeding him packets of peanut butter?” Now, anyone who saw the cutaway scene, where Big Boo is feeding her helper dog peanut butter with her hand, marveling how good the licks feel before flashing back to the present, where she explains “It got weird,” would not think the reason her dog privileges were revoked involved any sort of choking. They would think she put peanut butter on her vagina and let the dog lick it off. That’s what was left unsaid.

Sorry to have to be so blunt, but you might as well learn sometime. 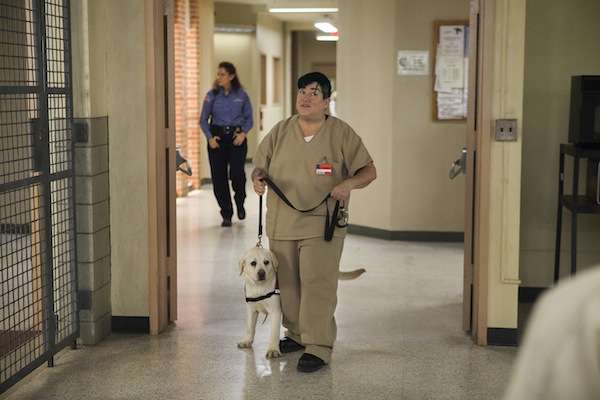