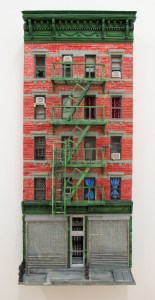 To close out the gallery’s three-year run at 124 Forsyth Street, Nicholas Buffon has turned Callicoon Fine Arts inside out. A single room that already feels something like an alleyway, with close-set white walls and a rough concrete floor, it’s now hung with Mr. Buffon’s exacting but fanciful models of the yellowish-white wooden house in the town of Callicoon, in upstate New York, where the gallery was founded; the steel gates that protect the gallery’s much larger new space on Delancey Street; a stop sign, a paper shopping bag, a streetlight, a cast-iron gate, a blue plastic bag of recycling, a red bicycle with a stolen front wheel, three Dr. Seuss trees, and the five-story, red brick Forsyth Street building itself, all made from paper and foam core.

Mr. Buffon uncovers the organic, by-eye quality of memory, or steps gracefully into an imaginative world where a thought is as good as a deed, by inhabiting the material limits of a home-from-school craft project. The green cornice of the four-and-a-half-foot-high Forsyth Street building is exacting, its bricks unrelenting, and the black paper shingles on its second-floor overhang don’t miss a beat; but there’s no glass in any of the doors or windows, the interiors are mostly empty, and the blue flowers in upstate-Callicoon’s windowbox have the exuberantly exaggerated simplicity of a cocktail napkin doodle. An Italian flag flutters at the bottom of a little blackboard in front of the first-floor pizzeria, under the legend MENU PIZZA SALAD PASTA HERO. Stop Sign is a very approximate octagon. And the leaves of the potted plants curl like the ends of a birthday-present bow: The whole place feels like an Adult Swim version of a Borges story about the precariousness of the art world. Or maybe the better literary comparison would be to Georges Perec: The whimsy and delight achieved by 124 Forsyth Street’s removed view of the world are so transporting that they almost succeed in concealing the trauma and loss that underlie them.