Last night on Late Night With Seth Meyers, Lena Dunham pretended to be SIA during the musical number “Chandeliers,” and it totally went over the audiences’s head. Look: I’ve been in the Late Night crowd for a taping, and it is full of bros. I’m not surprised that the deathly silence while Ms. Dunham is performing is due to half of the attendees grinding their mental gears trying to figure out why that lady’s voice was so out of sync with her mouth. And the other half of the audience is mad because, I don’t know, sluts? They’re mad because everyone is a slut. (Note: I’m basing this on my one, short experience of a guy at Late Night calling me a slut because I wouldn’t move my bag, but also because their comedic “opener” was terrible and also made a lot of ‘Ladies and their gross vaginas!’ jokes.)

Anyway, here is Lena Dunham pretending to be SIA. You can sort of tell from the panic in her eyes that she’s realized this stunt is too clever by a billion shades the moment she hit the floor. But hey, she powers through it, because genius happens when you are out of your comfort zone.
[youtube https://www.youtube.com/watch?v=Sj757ishXnQ&w=560&h=315]

But you know what? Who cares if the audience liked it or not? The Internet obviously did. (Well, we didn’t, but other people did!) The Internet knows who both SIA and Dunham are, and we are going to GIF the hell out of this. And aren’t GIFs the new Nielsen ratings, anyway? 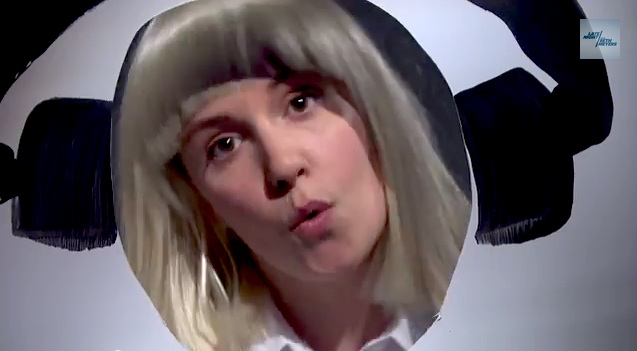