At 1:30 AM Friday morning, Disclosure takes the stage from deejay Kaytranata at the Output Club in Brooklyn with the polite intensity of the Royal Guard.

Drenched in the neon embers dancing from the wall of lights behind the stage, the brothers behind electronic DJ duo Disclosure—Guy, 23 and Howard Lawrence, 20—make no introduction. Tonight they are playing a Governor’s Ball pre-show, which means they’re performing for the people who’ve loved them out of obscurity, not the throngs of teenage girls who first heard them on Z100.

As the Lawrence brothers begin the set with “White Noise,” they begin their transformation from siblings to a single entity—one set of forlorn eyes sparkling under a haze of neon light. Guy wears a white t-shirt, Howard wears a black. They do not smile. They do not wave. Instead, Guy takes a sip from a can of Natural Light and whispers something into his younger brother’s ear. As they smirk at each other with boyish intimacy, it’s clear that there’s one secret they’ll never disclose: themselves.

And Disclosure prefers to keep it that way.

Although the duo became an industry mainstay after the success of their 2012 single “Latch” off their Grammy-nominated debut album Settle (2013), the brothers behind the music remain a mystery. Disclosure’s Wikipedia page is like a LinkedIn profile—detailing a basic list of their accomplishments, but lacking even a mere glimpse into their private personas. They rarely speak to the press, particularly American outlets. And true to form, all of their album artwork obscures the Lawrence brothers behind glowing white lines.

Last night, I set out to dimensionalize Disclosure’s carefully concealed identity. I failed, majorly. But trust me, I tried everything in my journalistic power to solicit even a “hello” from Disclosure. And by the end of the night, that revealed an element of the band that I didn’t need a one-on-one to realize.

Harrison Johnson, 22, a longtime Disclosure fan, sits quietly in a booth on Output’s upper level before the show starts. As I walked over to him and asked him his opinion on Disclosure, his eyes brightened from beneath his bucket hat. “Disclosure’s music is a true insight into two brothers. Its a very personal experience,” Mr. Johnson explains, adjusting his bucket hat, “a lot of artists are just projecting, like, ‘Let’s dance.’ Disclosure’s beyond that—they’re saying something about human relation.”

Opposite from Mr. Johnson’s booth, a two men clad in harem shorts and camo pants, respectively, dance wildly to as Jubilee, the night’s first DJ spins her deep house remix of Beyoncé’s “Partition.” I approach them, awkwardly interrupting their spins and dips with a handshake. And Joe, 27, tells me they “aren’t on drugs, yet.”

“Disclosure just makes you want to dance,” he shouts. “I love them because of the soul in their music. All their beats and rhythms and melodies just make you so happy,” he beams, illustrating his elation by dizzily bobbing his head.

Disclosure is intent on keeping their fans’ knowledge of them strictly within the musical sphere. And Output did everything they could to honor that desire.

The Brooklyn dance club prides itself on being a music lover’s paradise, banning photography (I had to check my camera at the door), press, and gendered bathrooms. On their Facebook page, they claim to “welcome individuals who value the communal experience of music over cameras and bottle service” and “respect” over “egocentricity” and “cell phones.” All of which sounds wonderful, but in reality translates to an ironic parade of trying-too-hard hipsterdom.

When I tried to gain access to the DJ booth to speak with Disclosure insiders, Output’s owner, a middle-age white man in cargo shorts and a graphic tee positioned between me and the door, said to me: “I don’t care who you are. You cannot enter the DJ booth.”

When two other women, clad in leather hats and bralets tried to enter the booth, he also barred them, but not before taking their numbers.

As Output’s commander-in-chief glared at me, I stood on my tiptoes and leaned over the DJ booth partition, hoping to extract information on the golden duo from the gang of bearded flat-brim-hat-wearing dudes inside.

“Excuse me, sir, I’m a reporter,” I shouted, tapping a deep v-neck-clad Disclosurite on the shoulder. “Can I speak with you about Disclosure?”

“No,” he responded immediately, turning his ultra-important back on me.

This happened a few times before I gave up on the VIPs of the VIP-less club.

So I spoke with people who actually make music, not pretend to be besties with the band, such as Jubilee, who I found jamming out to Disclosure with the normal people. And despite the fact that tonight is the ombre-haired, petite lady-dj’s second time playing at Output, and second time playing with Disclosure, she’s never even met them.

“I don’t know them at all,” she pauses, swaying her hips to a deep synth, “It’s pretty secure here.”

But even behind this veil of secrecy, Jubilee is positively mad about Disclosure, just like everyone else here.

“Disclosure changed music, they changed the way people are listening—they aren’t listening to such hard stuff anymore,” she says, staring at the expressionless brothers on stage. “Now prettier stuff is starting to be the popular thing thanks to them.”

At 3am the crowd rocks in exhaustion to a buzzing instrumental beat and panicked neon light, and Disclosure teases them with the cheery refrain of “Latch.”

As if reprogrammed, the crowd is jolted to life. They know what’s coming. The neon lights die, and for one glorious second the Lawrence brothers stand in full fluorescent clarity for their adoring fans. The slow and rhythmic bass transforms into an electronic echo. A single purple light blazes out from the stage wall, projecting the brothers’ fit frames across the club.

And the beat drops.

Almost forgetting about the rejection that characterized my Output experience, I closed my eyes and lost my body in their dancefloor classic.

As the song faded out, and hipsters and mainstreamers alike swayed in satisfaction, Disclosure did something they rarely do: speak.

“Do you know who this is?” Guy Lawrence asked the audience. “This is Flume.”

Flume, another electronic hipster-esque DJ clad in a simple white t-shirt, grinned out at the audience, waving graciously.

Shouts of “holy shit” and “OMG” are silenced as the trio spins the Flume remix of Disclosure’s “You & Me”—a deep house disco favorite.

Like the skinny-jean clad teenage boy on my right and middle-aged suit-clad man on my left, I whip out my iPhone to record the surprise collaboration.

Gonna be you and me/ Gonna be everything you ever dreamed.

But as the chorus pours onto the euphoric audience, Output’s owner slaps my phone out of my hand.

As the audience applauds as Flume and Disclosure are escorted off the stage by an army of massive bodyguards, I launch my final campaign to speak with Disclosure—inside their tour bus.

Standing on Wythe Avenue outside Output, I wait outside the bus with a gaggle of women with multiple piercings. Seeing their shadows through blacked-out windows, the female fans crowded outside the bus jitter with the anticipation of almost-fame.

But, instead of being greeted by one of the Lawrence brothers, we were met by Disclosure’s manager, who, sporting an intense red beard, stood stoically at the bottom of the stairs.

“You can’t come on the bus,” he sneered. And shut the door in my face. 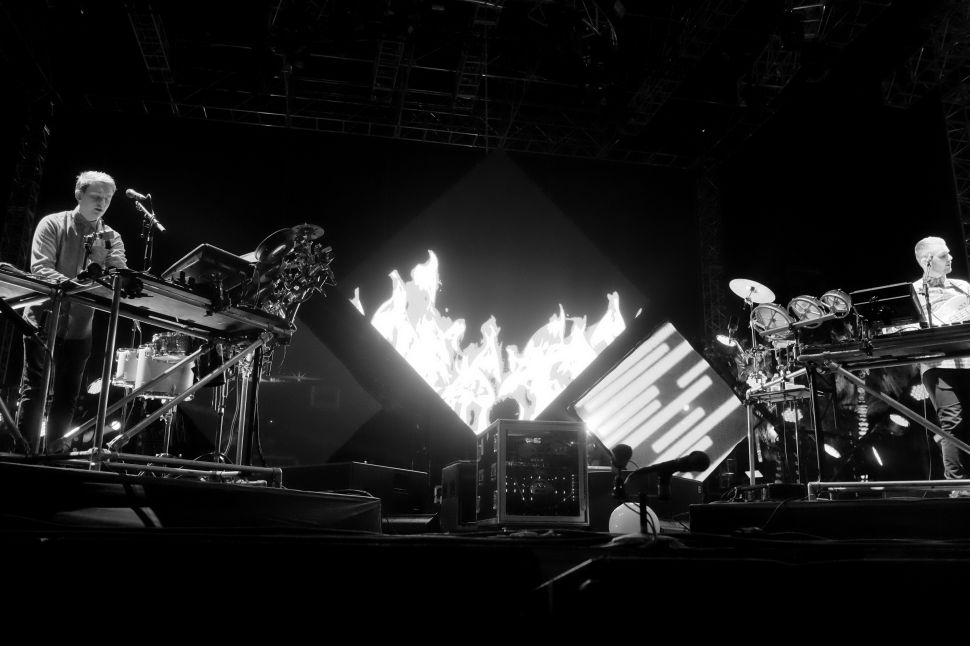