I have to be honest, I was not that excited for a Morello episode. Out of all the ladies of Litchfield, her wedding obsession/strange old time-y accent failed to intrigue me last year, and I think I’m still holding a grudge against her for stringing poor Nichols along. Nonetheless, I found myself surprised and delighted by her backstory, which went somewhere I truly wasn’t expecting.

Let’s dispense with that first: Morello is driving Miss Rosa to her chemo treatments under the supervision of Susan Fischer, who tells her to park in the hospital garage and hang out for a few hours. I had the first of several questions at this point: wouldn’t Morello either need to report right back to prison, or come with them? They must really trust her. Either that or Susan Fischer is dangerously permissive, which also seems like it could be the case. At any rate, they definitely shouldn’t trust Morello, as she gets the brilliant idea to drive to Christophuh’s house.

We see in flashbacks that Morello was living a “shop ’til you drop and then call the store and tell them that your shoes never arrived so you need a refund” sort of life at home, with a few breaks for repeat viewings of Twilight and updating of her vision board. She meets Christophuh in the post office when she’s picking up her billion packages, and he asks her out for coffee. Later she tells her sister about a romantic weekend they’re going on…and then we find out that their relationship never went beyond the initial coffee date. The engagement/rivalry for Christophuh’s affections is all in Morello’s head! Oh, and she also created a homemade bomb to kill either Christophuh or his girlfriend. In court, Morello seems resolutely convinced that everyone is blowing this out of proportion, so she is WAY nuttier than I initially thought, and thus way more interesting.

When she gets to Christophuh’s house in the present day she harrumphs around at all the wedding planning accoutrements before going upstairs and finding his fiancé’s dress. The house also happens to have a nice bathtub, so naturally Morello puts on the veil and gets in for a good long soak. She zones out in the tub and wakes up when he gets home, forcing her to jump out the window in a bathrobe and hightail it back to the hospital, where Fischer doesn’t suspect a thing. More questions: wouldn’t the van’s mileage be logged when they return to the prison, making it obvious that it took an additional trip? Also, if Morello was put in prison for being a stalker/making a bomb, shouldn’t she maybe not be allowed to drive the vans? I’m hoping the question of the van’s mileage is addressed in a later episode, because otherwise I don’t know how people aren’t escaping constantly from Litchfield. At the very least someone should be asking Fischer about it, even though Morello did return to prison willingly.

Other odd couples pair up throughout: there’s a sex competition between Big Boo and Nichols and they both have their eye on Soso. Piper gets involved after she goes on a rampage stealing her stuff back from the other girls, and she agrees to try to convince Soso to pimp herself out to Big Boo in order to get Miss Claudette’s blanket back, which goes about as well as you’d expect (Nichols wins, but it turns out Soso still likes to run her mouth during sex, making it a rather hollow victory). Vee is also on the hunt for ways to sneak contraband into the prison/gain power with the other inmates, proposing a homemade hooch business to Poussey, who seems freaked out by her and says no. Later on Poussey and Taystee have a tickle fight that turns into a kiss, and Taystee insists that she’s not gay, but really doesn’t want to hurt her friend. Vee sees them canoodling and tells Taystee that she doesn’t want to get a reputation outside of prison for being “gay for the stay,” and that Poussey isn’t her real friend. Vee, you mastermind! (Also in this episode: Sophia giving the girls some valuable lessons about their anatomy. She is perfect.)

Red and Caputo make another odd pairing, as she takes advantage of his love of plants to propose that she and the other Golden Girls rehabilitate the greenhouse. He can’t resist the appeal to his green thumb and tells her to draw up a budget. We see that what she might really be excited about, however, is a grate below the floorboards…perfect for stowing contraband. Red, you mastermind!

Finally, Larry is still hanging out with Polly while Pete is on his Contrivance Retreat, and they are getting rather dangerously couple-y. When an old woman mistakes them for a married couple with their baby they play along, first as a joke, but it doesn’t seem like it’s much of a joke when they’re watching TV together with Polly’s head on his shoulder. This just seems like very dangerous territory, is all I’m saying. Interesting territory, though! I can’t wait to see how it plays out. 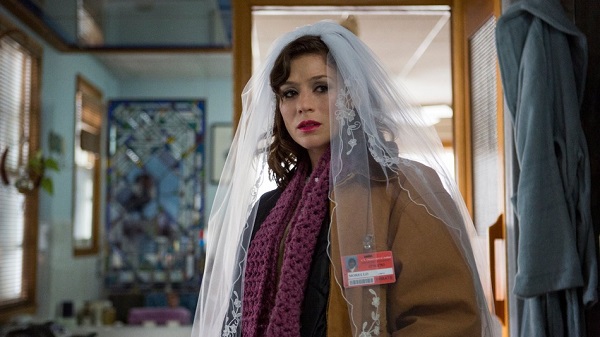