Missed opportunity to use a Sublime song, is all I’m saying.

In this episode, Orange Is The New Black continues to delight me by focusing on the back stories of characters that I got to know on the fringes of Season One. I didn’t really think that Gloria, the new dictator of the kitchen, would ever get her own episode, but this one is hers. Last seen attempting to out-mother Daya’s own mom during her pregnancy, Gloria goes head to head with Vee when the pipes back up in one of the bathrooms (which are segregated along racial lines, a situation that seems more engineered by the inmates than the staff). Gloria and her girls assume they can skip to the front of the line in the black girls’ bathroom since they are handling everyone’s food and thus the whole prison should have a vested interest in keeping them clean. This leads to a lot of squabbling which culminates in Daya getting tripped in the cafeteria and Bennett FREAKING THE EFF OUT, like, you guys need to simmer down.

Eventually Gloria and Vee face off, and Vee basically rolls over and shows Gloria her belly, saying that she is feeling crushed by the expectation that she be a “den mother” to her girls, and that she doesn’t want any trouble. Eventually Gloria agrees to let them use the bathroom and give Vee and her gals custodial jobs, which apparently she has some say over. Gloria swaggers off thinking she’s won, but Vee’s triumphant expression says otherwise. Is this phase one in her master plan to become the Empress of Prison Contraband?

We learn that before she was managing the kitchen and brokering interracial peace treaties in prison, Gloria ran a convenience store while her sister practiced dubiously effective Santeria in the back. We also meet Gloria’s boyfriend, who starts out being all reverential and calling her “Mistress” but very quickly starts punching her anytime she says something he doesn’t like, and we all know that Gloria has a bit of a mouth on her. Her sister wants her to kick him to the curb but Gloria is equal parts afraid and totally in his thrall. She finally gets the courage to leave when he hits one of her kids, and we learn that she’s been squirreling money away by letting customers convert food stamps into cash in order to buy beer, and then taking a cut of the money. It’s that scheme that gets her sent to jail, and it’s horrible to see her get taken away from her family just when she was about to liberate them from her abuser.

Her sister, who initially thinks the cops have come for the bad boyfriend, figures out that one of her unsatisfied customers ratted Gloria out, and puts a curse on both him and the evil boyfriend. They laugh it off, but when Evil Boyfriend breaks into the store to steal Gloria’s ill-gotten cash he knocks over a bunch of devotional candles and locks himself in the room with them, presumably burning to death. Santeria is real! One takeaway from this is that we should all be concerned that Gloria has figured out to make homemade candles in prison.

Meanwhile, we see another side to Healey, who is an enormous tool to Piper when she asks for a furlough to see her dying grandmother. Not even reminding him that he basically gave her up to be killed can sway him, until he goes home to try to convince his mail order bride to come see a community theater production of “Our Town” and she reminds him again that he has no friends AND she can’t stand his ass. Healey is so easy to hate and also so easy to pity when you see how completely isolated he is. He goes to a bar to drown his sorrows and happens to run into Caputo, jamming with his terrible band Side Boob, which you think will lead to the sort of bro-ing out that nightmares are made up, but instead Caputo wants to talk about how frustrated he is that when he brought in a plumber to address the bathroom issue Fig went ballistic and refused to fix it.

All he wants, he says, is to report to someone who genuinely believes they have a responsibility to care for these women, he says. It might be the most human moment any male guard has had on the show thus far, and Healey, mostly out of a desire to prove that he has at least one friend, agrees. Piper’s gain is Caputo’s loss: Healey submits her furlough application, and also starts greeting his new pal as “Cap-U-TO!!” when he sees him at the office.

Finally, we see that Red is hard at work rehabilitating the greenhouse with the “help” of the Golden Girls. It’s slow going, but it looks like this season will include a battle for supremacy between Red, Vee, and Gloria, the three women with the most power and access between them. It’s like a battle of the elements or something, I love it! 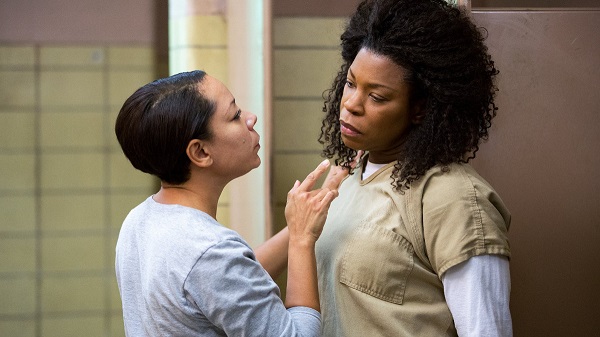 Filed Under: TV, OITNB, Orange is the New Black, recaps