What was supposed to be a press conference for State Senator Jeff Klein’s challenger Oliver Koppell turned into a rally for the incumbent and for his ally, Assemblyman Mark Gjonaj.

Mr. Koppell, a former councilman and assemblyman from Riverdale, was supposed to hold an event outside Mr. Klein’s Morris Park office attacking the incumbent for forming the breakaway Independent Democratic Conference that led the State Senate with Republicans — but Mr. Klein announced last night he would merge his five-member faction with the larger Democratic delegation. Mr. Koppell never arrived — even though some 30-odd campaign volunteers for Mr. Klein and Mr. Gjonaj showed up with picket signs to greet him.

“Koppell, take a hint, go back to retirement,” the crowd chanted as Mr. Gjonaj’s campaign bus blasted Journey’s “Don’t Stop Believing” and Queen’s “We Will Rock You” and “We Are the Champions.”

Mr. Gjonaj got up on the bus’s handicapped lift and blasted Mr. Koppell over the public address system.

“We scared him away. He saw you and got intimidated,” Mr. Gjonaj shouted. “He went back to Riverdale where he belongs.”

The assemblyman then praised Mr. Klein, who did not attend, for his years representing the area and for forming the IDC.

“We wanted to welcome Oliver Koppell on his first trip ever to Morris Park, and we’re really happy all these people came out today,” said Klein spokeswoman Candice Giove.

“The press conference was to announce the failure of the IDC to achieve their objectives. Klein admitted that they failed in these objectives, and so I did not see the need to hold a press conference,” said Mr. Koppell. “We tried to get it out last night, but we may not have gotten it to everybody.”

But Mr. Koppell vowed to carry on his campaign, arguing that Mr. Klein cannot be trusted to remain loyal to the Democrats, as he has yet to dissolve the IDC as an entity.

“I’m not convinced based on his statements. We can’t be confident that he’s going to follow through,” the candidate said. 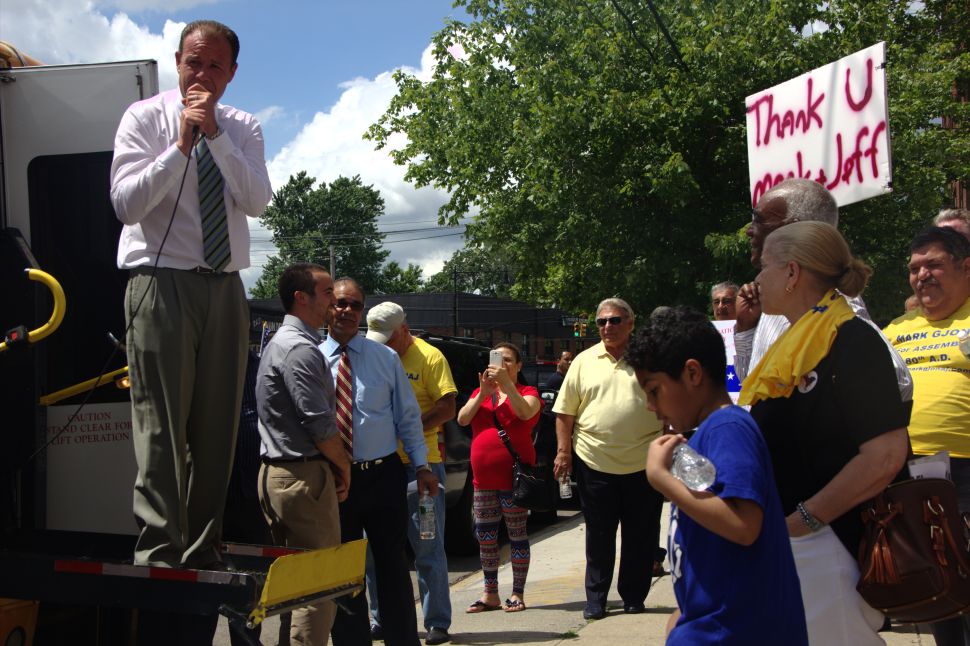