Y’aaaar! Thar be spoilers ahead!

“Italians have weird things with their mothers,” muses a character in Orange is the New Black. “They like, live with them way too long.”

Consider that the thesis of the second season of the hit Netflix show…or the takeaway, as the line is said in the opening of the season finale, which was released, along with the rest of the episodes, last Friday. More daring than the first season, which stuck only to the characters directly in contact with (ostensible) protagonist Piper Chapman, the new OITNB is even more of an ensemble piece, allowing almost every other inmate at Litchfield Prison a chance to eclipse the world’s most intolerably entitled inmate. (Well, besides Soso. But we’ll get to her.)

But what this season does, that in my opinion the premiere offering didn’t fail to do so much as didn’t even attempt, is humanize not just mothers but families as a whole that are greater than the sum of their parts.

First season, for instance: the main antagonist was George “Pornstache” Mendez, the abusive, sadistic guard played to 11 by Pablo Schreiber. (He’s most recognizable for playing on the other side of the law as Sgt. Benson’s would-be rapist stalker on Law & Order: SVU for the past two seasons.) Pornstache had everything you’d want in a villain, including the facial hair. “Thanks to this missed opportunity for cradle death, you’re here with me and all these other shit birds,” was one of the nicer things he said to an inmate. He muscled Red into letting him smuggle drugs into prison through the kitchen’s delivery service, causing Tricia’s overdose. He sexually harassed his charges, and slept with one of them, Daya Diaz, after her family set them up to get caught by Joe Caputo, one of the prison’s administrators.

So what are we to make of the bad guy—or woman, rather—introduced in Season 2? What makes Vee Parker (Lorraine Toussaint) such a chilling character isn’t that she’s a sociopath like Mendez, or mentally unstable, like fan favorites Suzeanne “Crazy Eyes” Warren (Uzo Aduba) or Lorna Morello (Yael Stone). In fact, Vee is a savvy businesswoman; a smack dealer who has been in and out of the system (or systems, if you include her role as a foster mom to RJ and Taystee) enough times to know how to play the game. She’s not in Litchfield for two minutes before she’s establishing herself as a new den mother and using her relationship with Taystee (Danielle Brooks) to win over the other black girls. Soon, she’s got a blossoming business, having her “girls” roll cigarettes from smuggled tobacco and selling them for stamps to other inmates.

Had the conditions been different, you could imagine Vee as a Sheryl Sandberg, “lean in” type. She’s all about the bottom line, and her coldness shouldn’t be confused for the same sort of wanton cruelty that Pornstache embodied in the first season. Vee isn’t a sadist. Instead, her “badness” manifests with her misuse of her matriarchal position. She’s an Evil Mother figure personified: a psychopath chameleon who morphs into whatever the scene calls for. To Suzanne, whom Vee immediately identifies as the weakest link, she is the strong caretaker who tells her that, “At the end of the day, you are a garden rose… and that bitch (Piper) is a weed.” To Taystee, she’s the competent mother figure. To Black Cindy (Adrienne C. Moore), she represents power, respect and wealth. When Black Cindy doesn’t want to play ball—trading the kitchen jobs for the bathroom that literally showers you with excrement—Vee is able to neutralize the former TSA agent by waking her up in the middle of the night and telling her what a loser she is. With Gloria, the voodoo-practicing Hispanic head chef, she’s a blustering, pathetic old woman who poses no threat to Gloria’s authority. Of course, it’s all a con. “She played you,” Red hisses at Gloria when she realizes that Vee has been able to install her own girls in the kitchen. “You don’t know what you’ve done.”

Red should know: through flashbacks we find out that Vee was her first confidante in prison years back, the friend who double-crossed her once she discovered how Red smuggled in her goods through the kitchen, breaking her ribs and puncturing her lung to teach her a lesson.

Which, of course, Red doesn’t: the Russian Mama Bear, so scary to Piper in the first season, is declawed this time around, having lost both the kitchen and her prison family when the situation with Mendez swirled out of control. But unlike Vee, Red’s mother act isn’t a con, which is both her saving grace and her Achilles Heel. When Vee starts to bring heroin into Litchfield, putting surrogate daughter Nicky Nichols (Natasha Lyonne) at risk for a relapse, it’s Red who fires the first shot at Vee, and it’s Red who is almost killed for her mercy when she doesn’t finish the job she started when she strangles her nemesis with cellophane during Super Storm Wanda.

The question that rises again and again is what, exactly, makes Vee a worse criminal than, say, Piper, who is also in prison for trafficking heroin, though internationally and on a much larger scale. Despite her increasingly violent run-ins with Poussey Washington (Samira Wiley), Taystee’s best friend, Vee takes the ego-bruising, objectionably smarter path of merely cutting Taystee out of the gang. There was no further punishment or retaliation; Vee saw that the hole needed to be plugged, and plugged it. It wasn’t personal, as they say. It was business.

Of course, that’s what makes it the worst transgression. The family hierarchies at Litchfield are constantly in flux, but they are the most necessary dynamic to these women’s survival; the tethering link to their humanity, frequently denied to them in lockup. Nor is it just the women: the guards and counselors at Litchfield are transformed by their interpersonal relationships, both with the prisoners and each other. In the first season, Litchfield’s bureaucrats, as represented by Sam Healy (Michael Harney), John Bennett (Matt McGorry) and Caputo, were dismissive, overwhelmed and ill-equipped to handle their duties…on their best days. On their worst, they had an active role in a prison pregnancy (Bennett, who had sex with Diaz and then used Mendez as a fall guy), attempted murder (Healy watching on as Pennsatucky drew a knife on Piper in the season finale), sexual discrimination (Caputo is a letch who masturbates to Piper after allowing her to call her fiancé, and later fires a guard for not returning his affections). That’s to say nothing of the large-scale fraud being committed by assistant warden Natalie “Fig” Figueroa (Alysia Reiner), who is misappropriating prison funds to pay for her husband’s congressional campaign.

But this season, starting around “Low Self Esteem City” and the Valentine’s Day episode, the show follows Healy’s therapist’s advice for a change of perspective. Suddenly, we see Caputo as more than a suit: he also moonlights as a badass bass player for his band Side Boob who is constantly raging against the system and Fig for Litchfield’s unsanitary conditions. “The least we should do is keep these women safe and clean,” Caputo laments to Healy at the local dive bar.

“At least clean,” Caputo amends, thinking about the literal shit-showers to which Fig refuses to allocate funds.

“At least clean,” Healy agrees. Healy, we learn, has more to his personality than just a mail-order bride and a deep fear of lesbians. He’s a man who began the job with a desire to help the inmates, only to become cynical and apathetic over time. (Which, honestly? Totally understandable. Working in a prison seems super depressing! It’s probably why Wanda wants to transfer out to a pharmaceutical supply company.) “People used to like me,” he tells a sympathetic Pennsatucky, whom he supplies with a new pair of teeth after Piper destroys the meth-caked ones she still had in her mouth. He also breaks off some of his Valentine’s Day cookie and shares it with her when she’s ousted from the White Trash gang, and later is inspired by her words—“You’re the only person to ever give a crap about me”—to start a “Safe Space” club and allow Piper to create and distribute a prison newspaper, one of the first articles of which is a puff piece that reads “Guards Are People Too.”

Sometimes this show can be a little on the nose.

Even SoSo—the incessantly perky hippy newbie—eventually finds her “family” when she stages a hunger strike and gains the support of Sister Ingalls and Yoga Jones. Big Boo the Butch loses her dog (“It got weird,” but not in a way that The New York Times could comprehend), but is able to make things right with her people after betraying Red. Officers O’Neill and Bell are moving in together and the glimpses we get into their domestic life are actually adorable. (He plays the banjolele and they stick fingers up each other’s butts, OMG!) Susan Fischer’s just as sweet (though not as crazy) as Morello. Even the little things—like CO Kowalski’s great bandana, and CO Maxwell’s nicotine addiction, and the guard whose seemingly cruel demand that Diaz do jumping jacks while pregnant during the blackout (it turns out to be the one thing that can calm down her panic attack)—bring a three-dimensionality to the characters that, unfortunately, strikes me as the most unrealistic part of the show.

I’m much more comfortable with Bennett’s slide from stand-up to morally ambiguous pussy: his slippery slope from getting Diaz pregnant (but they’re in love, so it’s okay you guys), to getting Mendez fired (twice) and locked in jail, to refusing to claim the baby as his own, smuggling in contraband for Diaz’s family in his hollow foot, sending Guerrero to SHU for threatening to rat on him, using excess force against Jaynee for tripping Diaz, freaking out on entire cellblock for thinking he’s a pussy…the list goes on.

Isn’t it sad, isn’t it strange that in a season that ends with voodoo curses and a terminally ill inmate escaping prison in a van—the thing that is most unbelievable is a prison staffed by compassionate officers and bureaucrats. Well, not so compassionate that they’re above blackmailing their female boss for a blow job, only to reveal that they’ve gone and used the incriminating evidence anyway. 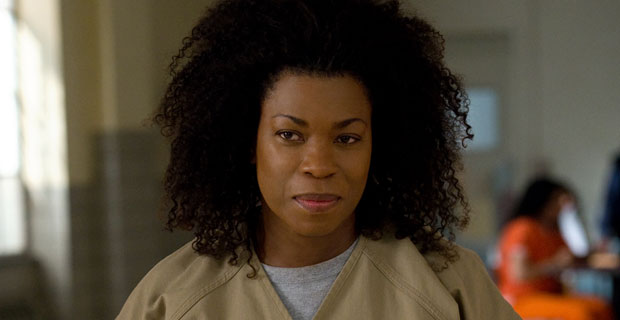