With the exception of Red, Nichols, and Gina, nobody comes off looking wonderful in this episode. The flashbacks belong to Piper and Alex, and we see that at the beginning of their relationship Alex was in a relationship with another woman. Although Piper was initially pretty mad about this, she was actually the one who moved the relationship forward despite Alex’s initial dishonesty. Alex’s ex dealt with this the way all mature women do: she left a flaming bag of poop on the porch of Piper and Polly’s dirtbag early-twenties house.

When Polly comes to visit Piper and almost immediately spills the beans about sleeping with Larry, Piper is understandably furious and upset. She deals with it first by punching the wall until her hand bleeds, and then gets some perfect advice from Red to stop wasting time being angry and start plotting her revenge, calling in a favor with her new sister-in-law that results in a flaming bag of poop outside of Polly’s apartment door. You go, Piper.

Meanwhile, Nichols is still hanging on to her tiny baggie of heroin, conflicted. Gina suspects that something is up and attaches herself to Nichols like glue, following her around and generally creeping her out. At one point Nichols perches on her bunk and opens the baggie, but in the next scene she brings it to Red. Red is so, so proud of her for doing the right thing and they have a really sweet moment together. Later Gina tells Nichols she’s proud of her, and though she initially pretends to hate the attention, it’s clear that she’s proud of herself too.

In less happy corners of the prison, Poussey is dealing with the loss of her friendship and her hatred of Vee by concealing a bottle of homemade hooch in the library season and going to town on it while she’s working. This liquid courage gives her the bright idea to go confront Vee in the bathroom, who truly couldn’t care less that Poussey hates her. Never one to do the dirty work herself, she lets Poussey get a few licks in before giving Suzanne the okay to beat the absolute crap out of her. It’s horrible to see this season how Vee has been able to manipulate Suzanne’s hunger for love and nurturing in order to turn her into this violent enforcer. Vee is a true psychopath and predator, and she’s been able to move through the prison like a fox in a henhouse, leaving destruction and violence in her wake without ever getting her hands dirty. I think until this point, Poussey thought she was dealing with an evil person who still had feelings — she thought the playing field was more level than it actually turned out to be.

The last storyline with tons of momentum in this episode was set in motion by Bennett in the previous one, when he told Caputo that Daya was pregnant. Caputo immediately has Daya tested to confirm the pregnancy, and gleefully informs Fig that it’s time to fire Mendez for real. She, naturally, is more concerned about how this is going to look in the press than anything else. She hauls Daya into her office and makes it clear that while Mendez is legally a rapist and so she will have to fire him, she privately thinks that this is all Daya’s fault. Cool. This makes Daya have doubts of her own, feeling guilty about sending Mendez to jail when he is truly innocent of the crime they framed him for, and wishing that Bennett would be less afraid to claim his kid, consequences be damned.

While they fight about this, though, Caputo fires Mendez, looking happier than we’ve ever seen him. As they lead him in cuffs through the prison he starts screaming about how he loves Daya and she should stay away from soft cheeses during her pregnancy. She looks a bit touched by this in spite of herself. Bennett looks ill. Well, that’s complicated. 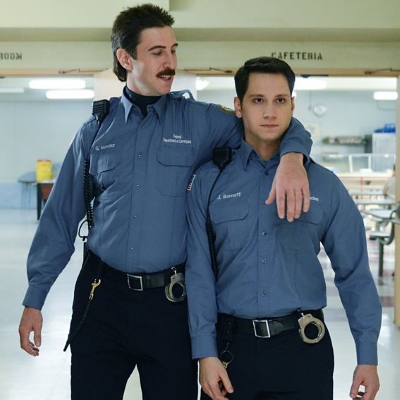