If you thought Litchfield seemed like a weird summer camp before, this episode provides all the confirmation you might need. With the superstorm bearing down on New York, the inmates are forced to bunk down in the cafeteria, creating the world’s largest and weirdest sleepover. This overnighter has everything: girls getting high on nutmeg (?) stolen from the cafeteria, Daya having a panic attack, Vee and Red staring each other down, a Lilith Fair-style singalong, and no working plumbing, so that everyone has to pee in buckets. Whee!

Caputo is managing everything overnight while Figueroa is at a fundraising event in Manhattan, and he keeps calling her when one disaster follows after another: the pipes are compromised by flooding, there’s no power and no diesel fuel in the backup generators. She handles this in typical Fig fashion, by screaming at him as though the storm is his fault and telling him not to call her again. We also see in this episode that her husband clearly expects her career to play second fiddle to his political aspirations, and that he’s happiest when she is being the supportive wife on the campaign trail. Oh, and he’s also having an affair with his aide, Gavin. Big surprise! This is a plotline that didn’t resonate very much with me this season — I didn’t exactly buy that Figueroa was such a monster because she was hurting so much inside, which is what the show seems like it is asking me to believe. If Vee is able to just be an unrepentant sociopath, why can’t Fig?

Daya and Bennett continue to feel ambivalent about their futures, and Bennett seems to doubt himself even more when he’s not able to help Daya during her panic attack. She tells him that if he wants to walk away from their situation, she would understand. He seems offended that she would think he’d do that, but also not like he’s ruling it out entirely. She also floats the option of him confessing and turning herself in, reasoning that after they both served their time they would be able to be together. Though this plan is not without serious flaws, it gets at the problem she’s having with the unfairness of the situation.

Piper is still freaking out about her transfer, but is not so distraught that she can’t recognize a golden opportunity: while the power is out and the guard watching them is snoozing, she sneaks into Fig’s office and grabs the invoices the reporter wanted. She’s about to get away with it when the lights suddenly flip back on, and Caputo catches her outside the door. In another part of the prison, Healy and Pennsatucky, BFFs ’til the end, are bonding over Oreos until Pennsatucky mentions that she is bunking near Big Boo that night and wants some tips on how to fend off her lesbian advances. This is Healy’s Kryptonite, as you might recall, and he gets super weird about it. Later on, Pennsatucky listens with great interest as Boo lays out her plan for misandrist world domination. It’s fascinating.

Poussey and Taystee start to make up, having a tearful encounter in the library, as Vee’s iron grip on Taystee begins to loosen (they’re excluding her after she promised Vee that she would be able to handle Poussey, only to have Poussey dump bleach all over the tobacco stock. In this episode we also find out through flashbacks that in addition to being a psycho, Vee is a Freudian nightmare, seducing Taystee’s dearly departed friend RJ after she learns from a corrupt cop friend that he’s struck out on his own to deal independently. She sends him out for a popsicle afterward, and the cop runs into him and frames him for assault, ultimately killing him.

At Litchfield, Red finally decides to take matters into her own hands and strangles Vee with a piece of plastic wrap, though she stops short of killing her. They have a moment to laugh about their rivalry and Vee suggests a truce…but after the storm passes and Red is surveying the damage in the greenhouse, Vee shows up with a combination lock inside of a sock, and beats her with it. If Vee kills Red after all this, I will never forgive the show. 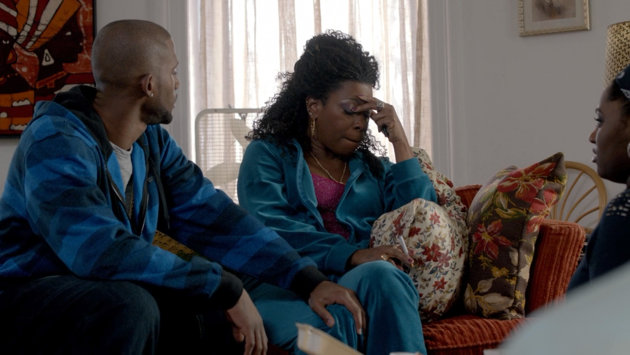