After the aperitif that was the season premiere, this episode of Orange Is The New Black felt like a real meal, throwing us back into the lives of many of our favorite characters and focusing in particular on the backstory of Taystee, as the inmates participate in a job training program run by the tightfisted Figueroa in partnership with Phillip Morris, probably one of the only companies totally cool with being associated with prisons.

Mothers and daughters and the question of family in general figured prominently in this episode, especially in Taystee’s case. We see her journey from a group home, where she meets an imposing woman named Vee, a drug dealer with a stable of young men who function as her employees and surrogate children. Though at first Taystee insists on walking the straight and narrow, getting a job as a fast food worker, she eventually falls in with Vee, who is impressed by her math skills, while Vee becomes the kind of parental figure that Taystee has never had but desperately wants.

Of course, she’s still a parental figure who is allowing Taystee to participate in an illegal trade, and though we don’t see exactly what landed Taystee in prison, Vee’s promise to her that she will protect her after Taystee’s friend (and a fellow Vee devotee) is killed by police seems pretty doomed, since we know Taystee ended up in Litchfield (and last season when she got out, she didn’t have much in the way of a support system). When Taystee sees Vee in new-girl orange at the end of the episode, her face says that this is the last person she was expecting to see at Litchfield, and that her presence is very unwelcome.

This comes right after a moment of triumph for Taystee, when she aces the job fair competition in a mock interview with a Phillip Morris rep. Her smarts and can-do spirit are obvious to everyone, and she manages to scrape a win out of a process that seems mostly engineered by Figueroa to make herself look good to the investigative reporter sniffing around Litchfield that we saw in the premiere, even as the inmates are mocked and humiliated by the process. Figueroa delivers a blistering monologue to Taystee, accusing her of looking for handouts when all she wants to know is if her mock interview victory could lead to a real job down the road. It’s a reminder, as this show is so adept at doing, that this system is engineered to actively work against the people who are caught in it. Rehabilitation is way down the list of priorities at Litchfield.

Ass covering is pretty high, though, which explains why Pennsatucky is able to convince Healey to spring for new teeth after she calls him on his faulty memory of the fight between her and Piper. While he initially feels protected by his status as an authority figure, she has some clout too, with the pro-life lobby. She scares him enough that he puts her in a van to the medical center, where we get a glimpse at a mouth that shouldn’t exist in nature. Way to work the system, Pennsatucky!

We check in with Larry a bit more too, who is having trouble letting go of Piper despite his father’s advice to move on (delivered in a gay bathhouse, no less). Larry seems orphaned, socially, without Piper, demonstrated by his thinking that a ~cool night~ is hanging out with Polly and her baby, the former of whom is teetering on the edge of postpartum psychosis and frequently without a top (though she’s incredibly grateful for the company). Also navigating tricky family dynamics is Daya, who is being mothered by both Gloria and her actual mother — the person, remember, who convinced her not to terminate her pregnancy last season. Though their intentions are good, Daya is clearly uncomfortable getting this much care and attention from a parent who didn’t seem to care much about her well being, right up until they ended in prison together.

Finally, we see how Red is doing after losing her exalted position in the kitchen and having to become used to being just another inmate. She’s depressed (we can tell by her hair) and even more bummed out when she hears from her son that her husband is having trouble making ends meet and can’t contribute to her commissary, since no one wants to give him their business after she ruined the sweetheart deal with the prison contract — a deal she engineered, she reminds her son, not that it matters much now. At the end of the episode she seems a bit more resigned to her fate, deigning to eat lunch with the Golden Girls. I’m very much looking forward to how this progresses, especially because I think the older ladies are hilarious: without the bravado and fire and jockeying for status typical of the younger inmates, they get to observe and comment on the action from a distance.

Want more? Click here for our recap of Season 2, Episode 3. 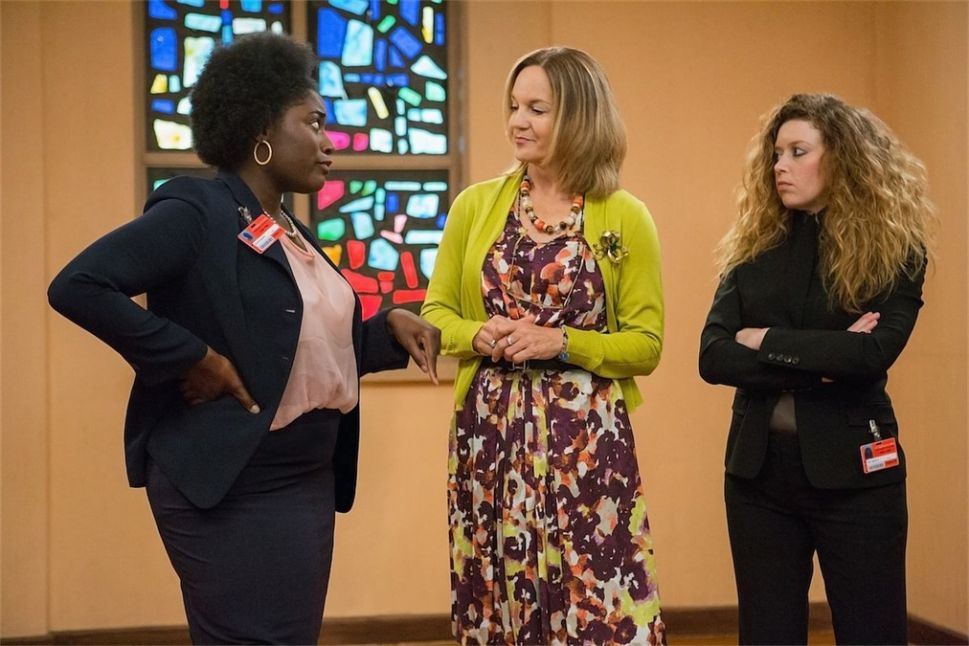