The third episode of Orange Is The New Black season two gave us the backstory of one of the best characters in the ensemble — Suzanne, or as she’s unkindly known around the prison, “Crazy Eyes.” Piper, seemingly facing no consequences for her lies on the stand in the previous episode, apart from a serious case of envy and resentment toward Alex for getting out, is back in the general population, as is Pennsatucky, who would like you to say something about her teeth.In this episode we also get an update on poor Morello and “Christophuh” — he’s marrying someone else, and that B stole Morello’s wedding date! This has never been my favorite storyline, as Morello is just a bit too delusional about her obviously doomed wedding, but it allows for some sweet moments between her and Nichols, who she dumped in Season 1. Kindly prison guard Susan Fischer also makes an appearance, looking on approvingly as Nichols comforts Morello. Fischer’s backstory is one I would really like to see, now that I think of it. Speaking of guards, Daya and Bennett are having very ill-advised clandestine conversations about their baby in the library. Daya wants to tell the administration that she’s pregnant so she can get some proper prenatal care, while Bennett would prefer that didn’t happen, for obvious reasons. He extends an olive branch in the form of raw spinach under her pillow (all that folic acid!) but this is clearly not over.

Meanwhile, Larry is still trying to use Piper’s experience to launch his own career, and meets with a New York Post-type of reporter who turns out to want to be put in touch with Piper, since he’s doing an investigative piece on how the administration at Litchfield is spending their money (i.e. not on the inmates). Larry is bummed out. Stay awesome, you famewhore!

While Piper has been on her prison cross-country trip, some of the other inmates, including Suzanne and dynamic duo Taystee and Poussey, have been amusing themselves playing intense rounds of Celebrity, aka the greatest party game ever invented. Suzanne is on clock duty, timing each round, but when she asks if she can give the game a try the other girls get all “Oh, but it’s really crucial that you watch the clock” on her, and though she accepts their answer it’s heartbreakingly clear that she’s very used to being excluded.

We see in flashbacks the basis for this feeling: Suzanne was adopted by a white couple (who we saw briefly in season one) who later had a biological child of their own. Her parents, though loving and well-intentioned, are ill-equipped to handle Suzanne’s boisterousness, to say nothing of her blackness, especially in contrast to their white-blond family unit. We see a somewhat disapproving African-American nurse approach Suzanne as she throws a tiny tantrum in the hospital while meeting her baby sister for the first time, distracting her with an offer to do her hair, and twisting it into the spiky style we’ve grown to know so well.

Suzanne’s road becomes even harder as she grows up. Her mother tries doggedly to integrate her into her little sister’s social world, but she suffers from being too imaginative and too offbeat, especially in the company of the teeny tiny porcelain doll girls her sister likes hanging out with. It’s clear she’s struggled her whole life with people telling her not to “be weird,” however good their intentions might be, as she can’t see what parts of her personality are “weird” — she’s just being herself. Meanwhile, the rest of the world can’t resist pointing out all the ways she doesn’t belong.

It’s no surprise, then, that she latches on to Vee, the steely-eyed black inmate who scares the red back into Red’s hair and who has clearly been to Litchfield before (and who knows Taystee quite well, as we saw in episode two). She quickly shows herself as able to play the game extraordinarily well: she ingratiates herself with Gloria, trading cigarettes for a cake that she uses to soften up Taystee and her friends. Suzanne takes to her like a duck to , getting the support, encouragement and understanding that she’s been lacking for so long. She even gets Suzanne to tell off Piper!

Vee is clearly going to be an important part of season two, but we also get an introduction to Brook Soso, an Asian-American inmate who is even more wide-eyed, annoying and entitled than Piper (and who is played by Kimiko Glenn, who I remember quite well from my middle school talent shows — let me tell you, it is super weird to recognize someone you know in Litchfield). At first Piper is put in charge of on-boarding her to prison life, comforting her while she cries through her first night, but soon Soso is comfortable enough to spout Oprah-isms while lounging on Piper’s bunk and telling her to lighten up. This. Will. Not. Stand.

After this episode, I’m looking forward to seeing how Vee and Soso shake up the social landscape at Litchfield, and see Suzanne develop more as Vee’s right hand woman. What will she be like if she gets a little bit of power, after being the underdog for so long? 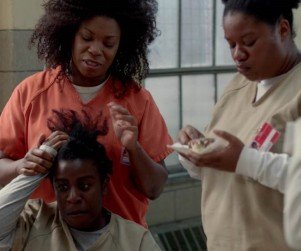