It’s all about power. Deep down, underneath everything. We all know that. And so many of our big TV shows love to remind us of it. Game of Thrones. House of Cards. Who has the power, who’s losing it, how does it transfer from person to person? What forms does it take, and how does it change? What happens when we ignore it, or push it too far?

What makes Orphan Black unique—at least for mainstream television—is the way it turns these currents of power into visceral, biological reality. (Or perhaps this power was always biological, and Orphan Black just makes this visible, palpable.) Characters don’t gain or lose points with a coup or a cutting remark, or even, for the most part, through outright violence, but through the exchange of congealed brain matter, extracted bone marrow, fertilized eggs. Their tools aren’t automatic weapons or political brinksmanship but syringes, bone-piercing needles, catheters.

No episode yet has been so thoroughly focused on this aspect of the show, on the fluids and the medical procedures, and none yet has seen such remarkable shifts of power and reversals of fortune for the main characters. From Alison and Donnie’s entire relationship resetting over (literally, directly over) the disposal of a dead body, to Helena apparently passing her backbone to Gracie along with her eggs, this flow of blood and skin and cells washes through and shifts everything and everyone.

Well, except for Alison Hendrix. She’s still the same amazing lunatic we know and love. Ali started the episode as a badass and continues to be a badass. Orphan Black just likes to remind us of this every once in a while, especially after she’s been knocked down a few times. And nothing shows why Alison is always the coolest mother in the room (see what I did there?) so much as when she gets her teeth into a project. So what if the project is wrapping up Doctor Leekie’s bloody corpse and finding a way to hide it? She attacks it with the same ingenious fervor she does scrapbooking at her crafts table. Yes, of course the corpse gets laid out diagonally on the tarpaulin, Donnie. That’s just logical.

Donnie, on the other hand, pushed to the limit by the stress, finally gets to have his Lester Burnham moment. He goes all macho vigilante on Angela and her stoolie Vic, both of whom come out of the situation smelling not-so-fresh, despite the fact that they’re not the ones burying a body under concrete in a garage. Angie tries to whip out the “I’m on police business” card, and Donnie just coolly trumps with the “really, the same business that got Art suspended, that business?” and then takes an incriminating cellphone shot, just in case. And Ali, after all these years, has a husband who might be able to hold a candle to her general badassery, and she screws him on top of the freezer that was very lately concealing the corpse.

Other characters being huge badasses in this episode include:

Cosima, who is joking around and valiantly working alongside Dr. Duncan, despite the fact that she is very obviously dying, of a disease that was intentionally created by the same Dr. Duncan for the express purpose of making sure she could never have Frankenbabies.

Little Kira, who volunteers to give Cosima her life-saving bone marrow in a painful operation, despite a fear of needles, as long as it will save her beloved “auntie,” who, let’s remember, despite looking exactly like Kira’s mother, she has really only known for a few months.

Gracie, who has had just about enough of her dad’s “you’re going to have someone else’s miracle babies” bullshit and gathers the strength to run away, despite never having known any other kind of life.

Helena, who spent the first half of the episode seeming like she was settling into some sort of domestic calm, getting her embryos reinserted into her womb and learning fancy words like ‘cervix’ and hanging out at the nursery school and sticking her tongue out at an adorable little kid. But then she finds out that Gracie’s pregnancy is not, as she assumed, the joyous result of her love affair with AWOL soldier Mark, but rather the product of Grace’s father, Henrik’s, wedding-night rape of Helena. And if that weren’t grotesquely incestuous enough, the eggs were implanted into Gracie her by her own dad. So Helena, following her own eye-for-an-eye sense of justice, implants some embryos of her own—into which of Henrik’s lower extremities we are left to painfully imagine for ourselves. Oh, and then she goes and burns the whole goddamned place down.

And finally, Rachel, who has now gone fully off the rez in her dismay at learning that she was designed to be sterile, and so will never have her own child to replace the happy childhood that was stolen from her. So she hatches a (fairly ingenious) plan over her nightly martini: She appoints Delphine Cormier as Dr. Leekie’s interim replacement, and then when they are changing offices, “accidentally” leaves false information visible claiming that Dyad has compromised one of Mrs. S’s lieutenants, the cadaverous Ben. Then, when Delphine goes to tell Sarah this sensitive info, Rachel, disguised as Sarah, takes advantage of the distraction to slip by Mrs. S and Ben (but not the perceptive Felix, whom she must drug) and kidnap Kira.

And so now we have finally ended up where Sarah (and all of us) thought we were at the beginning of the season. Kira is in the hands of Rachel, and nobody knows where they are, or what she plans to do.

Michelle Forbes is apparently not the highest of the highest brass at Dyad, as Rachel refers to her taking something to “topside.” Isn’t there something a bit eerie, a bit Wolfram & Hart Senior Partners, about that term?

As with Ethan Duncan reading from The Island of Doctor Moreau to Kira last week, in this episode we see Henrik telling the story of Frankenstein to a group of Prolethean kids. And, just ugh. It’s too easy, too stupid. Yes, sure, Henrik happens to be talking about the Arctic, mirroring the coldness at the heart of his enterprise, and yes, both Ethan and Henrik are makers trying to come to grips with their creations. But what’s next? Rachel reads Pinocchio to Kira? Where does the madness end? 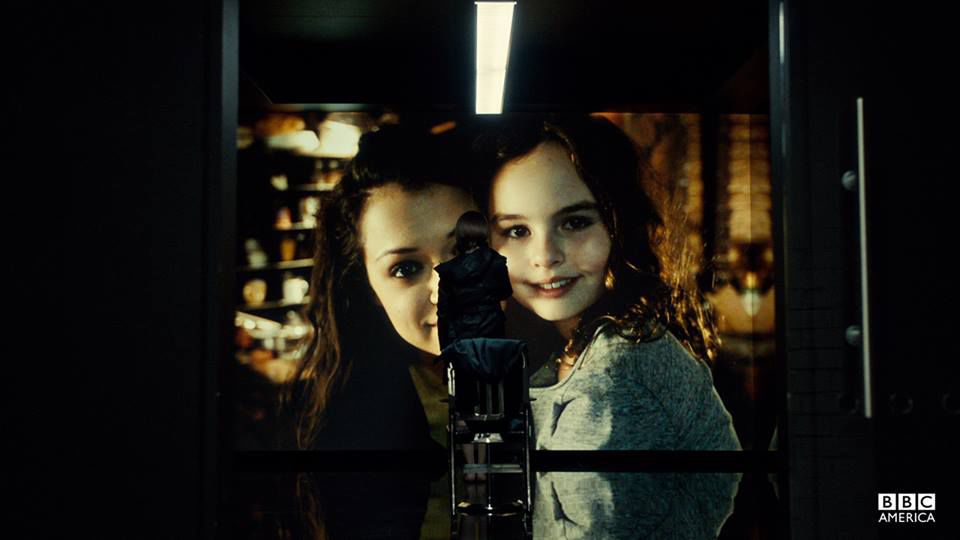