New clone alert! And…he’s a he?

So, clearly we need to talk about Tony.

When the boyclone first showed up onscreen, scraggly beard and all, I didn’t know what to think. It seemed like a huge misstep—like we were finally seeing the limits of Tatiana Maslany’s apparently boundless talents. Because for the first time, I wasn’t seeing the character, I was seeing the woman playing the character.

But that’s where I fell into Orphan Black’s trap. I wasn’t seeing the woman, I was seeing a woman. Playing a man. Because Tony isn’t some kind of genetically manipulated man-clone, as I first thought. He’s a trans man, né Antoinette, and born sexually female just like the other clones. So, in seeing a woman playing the part, we are immediately revealing our prejudices.

Or are we? For a show about nature and genes, Orphan Black is often, pointedly, about nurture and choice. It is always about those things that slip through the science, that don’t jibe perfectly, that give us reason to believe genes only tell a small part of the story. And in no small part, it signals this gap through an emphasis on performance: what and whom the characters act like, not some essential nature that they possess deep down.

It is no accident that the most brilliant scenes in the show are when one clone pretends to be another. This is when its true theme comes to sparkling life.

Tony, of course, is the apotheosis of the slip between nature and self-definition: not content with the way he was born, he has chosen to change his pronouns, his body, his self. What the show played for laughs last week, with Sarah playing Alison playing Donnie, it plays for high, affecting stakes this week, switching genders for real.

The thing is, Tony is so secure in his gendered presentation that he’s not we expect even from a trans man. He is an FtM who wears his hair long, for example. He’s very comfortable with a fluid identity, to the extent that he is not necessarily trying to “pass.” He’s in your face not only about being a man, but also about how that masculinity is in some way still a performance. When we see Maslany under the beard, it’s not because she (or the makeup people) didn’t do a good enough job; it’s because we’re supposed to.

Unpacking the wider implications of suggesting that being trans is in a sense a performance, I leave to those better qualified than myself. But it is clear that Tony, fluid gender and all, is an individual who has made his choices, and who knows better than most exactly who he is. Finding out he’s a clone barely shakes him; as he says, he’s already done all that work a long time ago.

Tony’s actual impact on the plot of the show is relatively minimal. His (literal) partner in crime, Sammy, was shot by Dyad henchmen, and Sammy gives Tony a message for the late Beth Childs. Sammy, who was probably Tony’s monitor, was in touch with Beth during her clone investigation. After some dancing around with Felix and Art—including kissing Fee, weird on far too many levels—he finally meets Sarah and spills the message: “Keep the faith. Paul’s like me. He’s on it. He’s a ghost.”

Definitely a ghost: nobody at the Dyad has seen or heard from Paul for days. And his loyalties are completely unknown at this point, but the message seems to suggest he has a big part in what is to come.

Speaking of wild cards, the erstwhile passive and doddering Dr. Ethan Duncan seems to have grown a couple of decades younger and started hatching some schemes of his own. Having taken over for Dr. Leekie, Rachel wants to cut a deal: Duncan will come to the Dyad to recreate the original synthetic clone sequences, which will save Cosima’s life, and they will leave Kira alone.

Mrs. S and Sarah agree, but there are two hitches. One, Cosima coughs up a lung and collapses much faster than Doctor Duncan can save her; and two, the good doctor seems to have plans for little Kira. As he tells her, “I’m nobody’s pawn”—right before handing her the copy of the a-bit-too-on-the-nose The Island of Doctor Moreau he’s been reading to her from. Turns out every empty space in the novel is filled with diagrams and formulae. And 7-year-old Kira, it appears, can somehow understand what she is looking at.

Seems the geneticist knows something we don’t about the child, and is thus not being completely truthful with Rachel when he explains why Sarah can have a kid. It’s not the other clones who are defective because they cannot reproduce, he claims, it is Sarah who is defective because she can. The clones were created sterile by design. Which throws Rachel into a destructive rage, because of course what the ice queen really wants, deep down, is an ickle babyyyy. (How ironic that an episode that so thoroughly emphasizes gender fluidity should fall back on this old chestnut.)

Meanwhile, everyone else is reconciling. Cosima forgives Delphine, especially after she says she loves her. Touchingly, Cos tells her that if she loves her she has to love them all (a bit creepy, but still touching), and Delphine agrees to love them all. Cosima also confesses to lab partner Scott that she is the clone they’ve been studying all along. Scott is appropriately shocked but respectful. And Donnie and Alison confess their respective murders to one another and are close to making up, hitting a slight speedbump when the OCD soccer mom sees the bloody contents of the car’s trunk (particularly how poorly they are wrapped). Oh, and when she finds out that Donnie used her gun to shoot Dr. Leekie.

And Felix finally warms up to Tony, only to send the trans bandit clone on his merry way, never to be seen again—until, we assume, the twists of the plot demand his return. 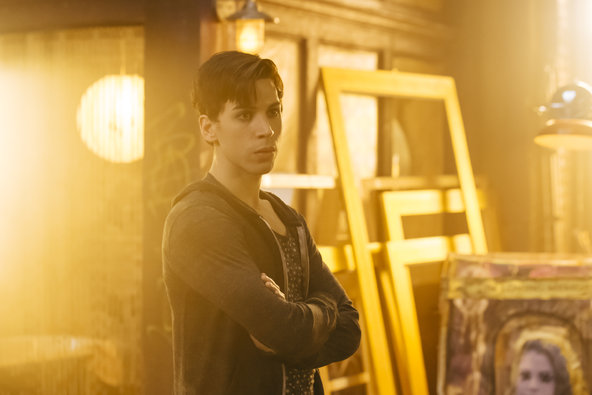