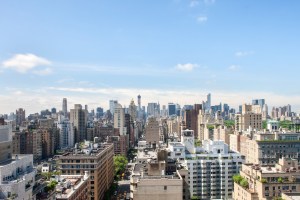 In 2004, Robert Toll—co-founder of luxury developer Toll Brothers—decided that his three-bedroom on the 20th floor of 30 East 85th Street wasn’t quite doing it for him. So he sold it to Gerald Peters for $2.8 million and moved on up to a penthouse in the same building.

The proprietor of prominent art galleries in Santa Fe and New York—as well as a Santa Fe area restaurateur—Mr. Peters, too, is now ready for a change, and has listed the unit with Carol Staab, of Douglas Elliman, hoping to rake in some $8.28 million on resale.

Something smaller, perhaps, for the gallerist? Mr. Peters spends more time in the Southwest where he got his start, Ms. Staab told the Observer, dealing in such art world stars as Georgia O’Keefe. From the looks of his place, he certainly has a keen eye for framing.

“The most unique thing about the apartment is that it has the most breathtaking Central Park and Reservoir views,” Ms. Staab said. “There are two terraces; one off the master bedroom and one off the living room, and a nearly floor-to-ceiling window in the kitchen. You can see the Chrysler building, the Empire State building and all those new buildings on billionaire’s row.” Whether this last represents an advantage or a weakness remains subject to debate. But with so much else to look at, the buyer can always ignore the spires that have lately occasioned such envy, outrage and awe. Inside the condo are planked hardwood floors and a marble spa bath, a mahogany paneled library and a fancified kitchen featuring ash blonde wood, stainless steel and cabinets All the Way from France!

“It’s a relatively new building, but the apartment has 9-foot ceilings,” the broker assured us. “Rarely does this kind of unit ever come up—it’s on the A-line,” which, at this elevation, means the condo shares the floor with only one other apartment.

It will be difficult, of course, to find another neighbor quite so refined as Mr. Peters.