This probably would have worked out for the better if near-naked aerial acrobatics were involved.

The New York Post reported that Collette McLafferty, 40, is being sued for $10 million by Charles Bonfante because she’s not attractive or talented enough to front Long Island’s first P!nk cover band.

The $10 million dollar lawsuit has left Ms. McLafferty with a bad taste in her mouth.

“The really insulting part is he said I would harm the public because I can’t sing and I’m too unattractive to front this kind of a band,” she told the Post. “I don’t think it’s his place to tell anyone that they’re not good looking enough to follow their dreams.”

Meanwhile, Mr. Bonfante complained in his lawsuit that “McLafferty was a mediocre vocalist at best . . . She had pitch problems, oftentimes singing flat for extended periods of time.”

Mr. Bonfante also got a little nasty in his suit, angry that “she didn’t look the part, or at least contribute to the overall aesthetics of the band.”

Ms. McLafferty, who told the paper that she earned a mere $75 for the show, is now preparing for the financial and emotional drains of the lawsuit. “I get to fight this for the next two years… I’m going to be broke, and he’s going to have a hobby,” she said.

Ms. McLafferty has countersued to have Mr. Bonfante’s claim thrown out and be recompensed for legal fees and damages.

As for P!nk? “I think her advice would be to stay strong, not to slink back and not let anyone bully you,” said Ms. McLafferty. 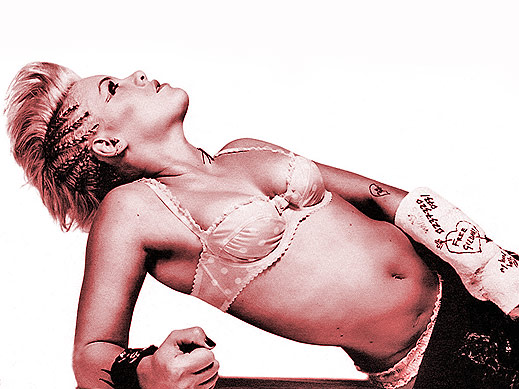