The Pied Piper of Park Avenue” is a serial about idealistic kids at New York’s private schools. It’s not the first story to be written against a deadline. Dickens published stories as serials; Tom Wolfe first published “Bonfire of the Vanities” as a series in Rolling Stone. But they didn’t have embedded movie clips and music videos. And they didn’t have .01%ers, elite school administrators and kids on a mission. This is the final episode: Graduate Day. For previous episodes, click here.

A week before graduation, the valedictorians of the elite private schools got an email from the Pied Piper.

Congratulations. You get the last word.

For weeks now, you have been slaving over your speeches. Before you sign off on them, I ask you to look at a video. It shows Jean Sara Rohe speaking at her New School graduation in 2006. Like you, she’d worked hard on her speech. But also speaking that day was Senator John McCain, who never saw a war he didn’t like. So she threw away her speech and said this:

Should you rethink your remarks? It’s your call. We just want to remind you: This is the last time your parents will have to listen to you in public. And your parents are Very Important People. They run things. What they do affects million of people. But because of where they live and how they live, your parents don’t know any of the people they affect. Their circle of caring is small — it’s limited to their families and friends and a few business associates. That makes their bubble almost impossible to pierce.

You were how we pierced their bubble.

We lied in last week’s email. We didn’t launch the Pied Piper initiative as a spring goof. We did it to steal the kids of the rich. To inspire them. To turn them into activists. And then to return them to their circle of caring. Did we want to get you in trouble? Totally. Because when your parents yelled at you, we hoped you’d tell them you were making good trouble — and that they also needed to act on behalf of the people.

In your five minutes of fame, you can get your families to act. Write back, and we’ll suggest how.

The graduation ceremonies of Manhattan’s private schools are monuments to tradition. Remarks, awards, a student speaker, a distinguished alumnus or board member, and then, tradition affirmed, it’s off to lunch.

Parents, teachers, trustees, classmates… good afternoon. What a glorious day! I know school’s out, but I’d like to start by giving you a quiz.

I see Head of School Winsor’s hand up. Mrs. Winsor, are you voting for Moore — or are you waving at me because this isn’t the speech you approved? Right. The speech. Forgive me. I wrote a better one.

The correct answer is The Pope. Francis the Great. And he’s not the only one to notice that the game is rigged. Decades ago, Hunter Thompson figured it out. “A job?” he asked. “But how would I make any money?”

My parents have jobs. They work hard. But if my dad is a typical CEO, he’s paid 331 times better than his employees. Even my mom couldn’t spend it all! So his money makes money. And making money while you sleep — that’s the winning ticket.

Economic inequality never ends well. Usually the peasants storm the castle, kill the nobles and divvy the spoils. But this time it looks as if the mega-rich will get away with it — you don’t see people buying pitchforks. “Bread and circuses” was the old way to put the masses to sleep. Now it’s just cheap toys. There may not be a chicken in every pot, but there’s a flat screen on every wall.

Not everyone’s asleep. There are people close to us — people who work at this school — who spend five days a week seeing how we’re being groomed for success. That looks good to them. They’d like their kids to make it.  They’re just like our parents — just without money. I’d like you to meet one of those people. She works in the kitchen here. The kids know her — she tends the salad bar. Would you welcome Lorraine DeJesus?

Lorraine DeJesus had been standing off to the side, unnoticed in the sea of chic. Short, not thin, unremarkable in every way — she was a woman you see without seeing.

“Miss Helen asked me to speak to you about opportunity, but she no tell me what to say,” she said, in a heavy accent. “Now, standing here, I see you all, and I know: You are all very beautiful. I see now the beauty of your children… where it comes from. They shine. And you shine. This whole world — your world — it shines. It is too bright for me, but my children… I want them to shine like this.”

She paused, and in the sudden silence, you could feel a surge of unaccustomed empathy.  Helen read the moment and nodded to Lorraine, who left the stage.

“You all know Jamie Niven, the Chairman of Sotheby’s,” Helen said, and there were many who smiled, because Niven is an affable fixture on the social circuit. “At charity events, he stands up and says, ‘You are now going to give money to this cause. For that gift, you get nothing but satisfaction. Now, do I hear $25,000?’ Well, that’s what we’re going to do here — we’re going to start a fund for the workers at this school, so they can feed and clothe and educate their children. This fund will be administered by…” She paused, as if thinking, and then brightened, as if she’d just had a brainstorm. “… Hays Nolan, a trustee of Brearley. Would you, Mr. Nolan? And you’ll set it so contributions are tax-deductible? Good. Thanks. Ok, let’s do this…. Who wants to help the Brearley workers? Someone say $25,000.”

Someone did. And another. $50,000 in 30 seconds. How high could go? In the back there was a disturbance — a man and woman arguing — and then the woman pushed the man away and gave $50,000. In a few minutes, the fund for the Brearley workers was $175,000. And at four other schools valedictorians also produced six figure donations.

Lorraine DeJesus got her picture in the Times. Annie Winsor figured out that Helen Greenwood had taken Becky Jackson’s class, and she forced Becky into early retirement. She wanted to use some of the money donated to the workers to pay Becky off, but Hays, appalled, wouldn’t go along; their affair ended, badly.

And the kids? Graduation is a break shot; they head off in all directions. In a few months, they’d be at college, their parents far away and receding fast. Impossible to contemplate who they’d become. So let the camera stay at graduation, on the family constellations and the faculty accepting praise and the trustees asking if what just happened was a good thing, and would it ever happen again, and, most of all, what might be done about those liberal teachers. 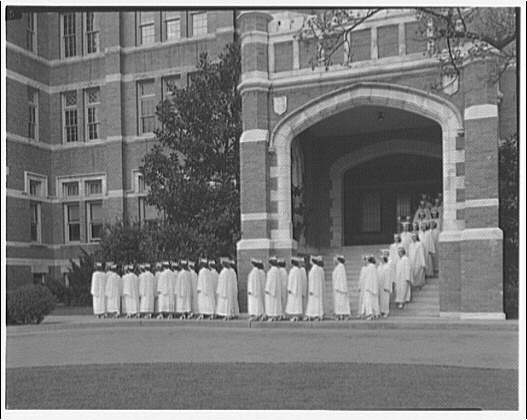