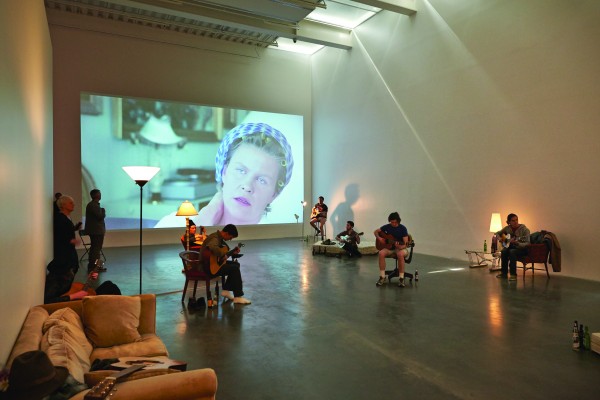 If irony is the antithesis of sincerity, Ragnar Kjartansson might represent their synthesis. A black-and-white photo of the artist at the age of 14, taken on the occasion of his confirmation, hangs alone on the wall that meets a visitor emerging from the New Museum’s elevators into Mr. Kjartansson’s current exhibition there, “Me, My Mother, My Father, and I.” Over and around this wall, 10 voices arranged in multipart polyphony by Kjartan Sveinsson (formerly of the Icelandic pop band Sigur Rós) come singing, while in the photo, young Master Kjartansson, sitting between his father and mother, thoughtfully waits it out with eyebrows raised and eyes downcast. The parents, Kjartan Ragnarsson and Guðrún Ásmundsdóttir, were costars in Iceland’s first feature film, Morðsaga (Murder Story, 1977), and Mr. Kjartansson—or so he was told, or so he tells us he was told—was conceived during shooting in May 1975.

Circle around this wall into the main room. The scene in which Ms. Ásmundsdóttir’s housewife character fantasizes about Mr. Ragnarsson’s plumber plays in an enormous projection; underneath it, 10 young men playing 10 cliché rock boys lounging on a scattering of lamp-lit armchairs, couches and naked mattresses play Mr. Sveinsson’s arrangement of the scene’s gleefully ridiculous climactic line on nine acoustics and one National guitar; and Raging Pornographic Sea (drawings), a series of pencil and charcoal drawings made by Messrs. Kjartansson and Ragnarsson, hangs opposite.

But the highlight of the whole brilliantly triple-bluffed installation is around the corner, a trilogy of videos in a dedicated niche: Me and My Mother (2000, 2005, 2010). In the first, a skinny, young Mr. Kjartansson stands in front of a wall of bookshelves with Ms. Ásmundsdóttir. He has asked her to spit in his face repeatedly. She does, as they both try not to laugh. When she runs out of saliva, she leans in and blows long raspberries, as if to entertain an infant. In the second video, in a tighter shot, both are older—the son’s face filled out with manliness or beer, the mother more conclusively gray—and more serious. What began as a lark now has to mean something. In the third, Ms. Ásmundsdóttir is red-eyed and wearing red velvet, Mr. Kjartansson is dressed casually as himself, and the performance is suffused with loss and melancholy, with the slow death of every new sentiment and gesture, as well as the more literal death of the people we love. Banality is pathetic, and pathos lies in the banal; the line the rocker boys will be screaming all day for the length of the exhibition is “Take me here by the dishwasher!”