PSA: while Aviva is really no more of a monster than the average Housewife on any of the other franchises, her father George is the monster to end all monsters and must be stopped. We’ve now watched him grope other women, make all manner of sexual innuendo toward them (including his own daughter!) and threaten them. It’s really beginning to feel like irresponsible television, and it makes it really tough to enjoy the show as a light and fun romp where it prominently features someone who should probably be in jail.

Anyway, Aviva, Sonja and George’s hostage fiancé Cody are hanging out in Sonja’s garden gluing Swarovski crystals onto their nails (“Cody runs one of the most lucrative nail salon chains in Miami,” Sonja says). Sonja makes a joke about how her neighbors are going to think that her dealer is over (???) and Aviva asks Cody if she’s marrying her father for money.

Unfortunately, Cody isn’t, which means we have to hear about how well George “knows a woman[‘s body]” and that the plan is to freeze his sperm until Cody can have kids at 35. Blood does not start pouring out of everyone’s eyes, mouth and nose at this idea, and the scene ends.

Luann, Sonja and Kristen go shopping for hats to wear to a horse race in Saratoga, where Luann has invited everyone, sans Ramona and Aviva, to spend the weekend. The ladies try on hats and squeal while a dour saleswoman looks on.

“Luann has a head the size of a pumpkin, but that’s why she photographs so beautifully,” Sonja educates us. It is a welcome and all too brief reprieve.

In the next scene we’re at the Museum of Sex, where Aviva is hosting an engagement party for her father and Cody, because she is really leaning in to her identity as “the Housewife most in need of intensive therapy,” which is saying something when you share the screen with Ramona. It was at this point that I began to suspect that this is a fake storyline, concocted to get Aviva more screen time, which is somehow way worse than if it were real. Ramona shows up the party even though just last season George referred to her as a “trailer turd,” and Kristen gets a lovely introduction to him in which he tells her “Come over here, I’ll lick your nipples,” I mean, Jesus Christ.

Ramona is introduced to Cody and immediately presses her on how she could be marrying this abomination, but she does it in typical Ramona fashion by noting “I know you have no parents.” Turns out both of Cody’s parents have died, a sad fact that Sonja notified the group of earlier with the express intention of avoiding a situation like this one.

“All right Mario, we gotta go, I made another faux pas,” Ramona says, and later, “I didn’t know her parents were dead,” which is an actual bald-faced lie, but so many people are behaving in worse ways in this scene alone that I have to let it slide.

Aviva immediately tells George what happened for reasons passing understanding. “That piece of garbage. Where is that bitch?” he says. How has no one punched this man in the dentures yet?

And then — “You know what happens to bitches? They get fucked by dogs.” Some day Andy Cohen is going to have to answer for putting this man into all of our ears and eyes.

Luann and Sonja go for a bike ride and a picnic in the park. “I need to reconnect with Lu,” Sonja says. I think about how endearing all of Sonja’s nicknames are — Lu, Radzi, Singer, and it’s almost like the Museum of Sex debacle never happened. Over brie, broccoli florets and rosé Luann points out that Sonja values her friendship with Ramona over her friendship with her.

“She’s labor intensive!” Sonja says, to which Luann counters that that’s not really the point of friendship. She says she’s looking forward to getting Sonja off the “Ramonacoaster” in Saratoga. FORESHADOWING.

The ladies arrive at “Luann’s rental” in Saratoga (enough, Bravo chyron people, not even the royal family can afford to have a house in every town in upstate New York) and get ready for the races. Sonja goes a bit hard on the mimosas, and everyone looks perturbed, but she’s in a good mood and they head out.

Back in Manhattan, Ramona shows up at Aviva’s doorstep with flowers (she’s learning!) and an apology. Being Ramona, she also has to emphasize that she is right, her intentions are good and this is all stemming from her desire to not allow her daughter to be “prey to an older man.”

George is there too.

“You were right to expel me [from the party last year],” he tells Ramona. Learning! Hugging! JK, no one should ever hug George.

“If you really love [Cody] you would do the unselfish thing and let her go,” Ramona says. The hostage negotiations do not go well.

“Except for the fact that I do not control another human being,” George says.

“You’re a very controlling person, like me,” Ramona counters, then calls George lecherous. He counters by saying that her comment about Cody not having parents was racist. Ramona’s crazy eyes reach new heights. George tells her that he refrains from suggesting that her daughter should have a paternity test, Ramona calls him a pedophile (“He’s a pervert, not a pedophile.” — George’s daughter), and then she asks if he would even be able to successfully impregnate Cody.

George says he’ll test his sperm count on Ramona and then something else vulgar and she storms out, rightfully so.

In Saratoga the ladies are talking about penis size and I’m skipping over it because it’s all too much. They are also deciding how to bet on the races, with all the girls putting in $50 and Sonja making a breezy, overblown production of only betting $2 on another horse. Sad face. Of course the girls win some $3000 between them, with Sonja penniless and forced to watch them celebrate. Who wouldn’t wander off in search of more booze?

That’s exactly what Sonja does, but she apparently also doesn’t answer anyone’s texts asking where she is, so everyone piles into the car and goes back to the house. Sonja turns up eventually, freaking out, drunk, and changes into a child’s nightgown and teases her hair in the mirror while screaming about how everyone left her.

“Watch me leave you now.” — Heather, not here for this nonsense. Eventually Sonja packs her bags and announces she’s taking off for the Hamptons, Ramona-style, but in the promos for next week she is still hanging out with the Saratoga crew, so who knows? Everything is a nightmare. 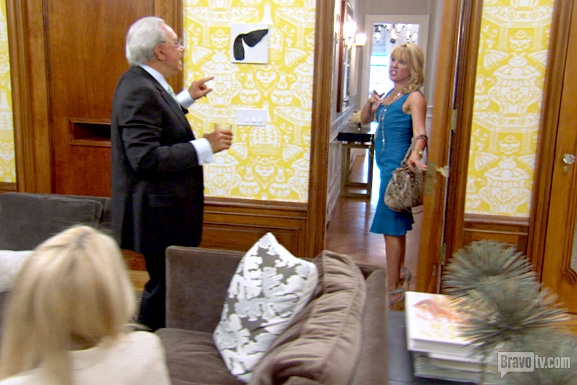