This week we pick up right where we left off in the last episode, with Sonja peace-ing out of the Saratoga rental, luggage in tow, telling her tale of woe to the limo driver, who looks like he’s re-examining everything in his life that has led him to this point. His moment of existential reckoning does not exactly make him the sympathetic ear that Sonja was craving, and so she heads back into the house with her Reasonable Person hat on. I love her.

She explains to the bemused ladies that her feelings were hurt because she was having a great time at the races and then everyone was “mad” when she came home on her own, which Heather calmly explains isn’t true. They squabble a bit more before deciding to salvage the night, and Sonja shoves some cheese and crackers into her mouth before heading out like the aristocrat she is.

Carole explains that Saratoga is basically a party town and we see that Sonja is having the time of her life drunk dancing.

“You don’t know how to do air guitar?” She screams at someone. She kisses some guy who looks like he just escaped from the set of The Bachelorette. Get it girl!

Back in New York, Ramona is taking Avery for her driving test.

After the insanely complicated business of putting seatbelts on almost derails them completely, they head out on the road. I have to say, I sympathize with Avery, since the two times I’ve driven in Manhattan I was certain it would end in several deaths. She does fine, but freaks out when the instructor tells her it’s time to parallel park. Avery and Ramona look at her like she just asked them to ghost ride the whip.

“I can just YOLO it,” Avery says, and at least one adult in the car agrees that’s a good idea. Eventually she pulls into the HUUUUUUGE parking space. What a nail biter. Ramona makes Avery do it again because she can’t stand that she got it right on the first try and of course she hits someone’s bumper. The driving instructor LOLs.

The other ladies are now at some Hollywood Life-sponsored luncheon for a charity organization Luann works with that helps women deal with the physical effects of cancer treatment. A bunch of real dour-looking women come in who are apparently going to be modeling dresses for the guests. Luann has a “secret guest” wearing, like, a Carnival mask, who I can only hope is Amanda Sanders, Image Consultant. Aviva shows up for the party and freaks out because Miss USA is there and her father apparently told her that he and his fiancé had a threesome with her the other night. HAHAHAHAHAHAHAHAH. Only Aviva would still be giving credence to the insane delusions of a senile, oversexed old man. That’s soooo Aviva!

Aviva texts her hot goss to Heather while Luann introduces Bonnie Fuller, who is giving a speech. When Heather reads the text she starts laughing, as any other person would, and then she shows it to the other ladies, as any person would, and Luann has a meltdown about how rude everyone is being. The fashion show begins. The final dress is modeled by the “mystery guest,” still in her mask like this is the first scene of a horror movie. Carole suckers Aviva into a bidding war for the dress, which she doesn’t want, which is hilarious. Aviva shells out $550 for the very unremarkable dress aaaaaaand the SPECIAL GUEST IS KELLY BENSIMOOOOOOOOOOOON!!!

Anyway, Aviva tells the Miss USA story to the WHOLE table, even though it is obviously fake — like, I refuse to indulge this anymore. George is a liar and for some reason Aviva is invested in perpetuating all the lies he tells (and by “some reason” I mean “for a storyline”) and it’s just transparent and gross at this point. Aviva claims that her father “swore on her leg” that it happened, which I will also be doing going forward. While all of this is going on Carole makes a show of being really interested in Kelly’s book, which she says is about “the Hamptons.” Carole is throwing more shade than a weeping willow at this lunch and I am loving it.

Ramona stalks over to Miss USA like the busybody she was born to be.

“I guess you were [Aviva’s] house guest,” Ramona says to her.

“We were fast friends,” Miss USA says, confused. Ramona keeps quizzing her on the timeline like she’s a cop in a procedural drama, and eventually it comes out that Miss USA met George, Aviva and Cody in the evening but never actually stayed over at Aviva’s house. Ramona makes it her responsibility to tell her what George said happened, and she handles it as gracefully as one can, poor girl.

Later on, Kristen shows up at Sonja’s house of horrors for a 10am appointment with Sonja’s facialist and Pickles the intern tells her that Sonja never came home last night.

“Yeah, of course,” Pickles says, not nervous at all. The facialist is also already there so they just get started with the appointment on Sonja’s beautiful balcony. Guys, I really hope she never has to give up Grey Gardens, it is the most beautiful thing in her life. Plus, what would happen to all the vagrant interns? Eventually Sonja rolls in wearing the world’s most perfect walk of shame outfit — ripped dress, New York Mets t-shirt, black baseball cap, thick framed glasses, carrying her heels. Based on her attire I’m pretty sure she slept with some 26-year-old dude who works at Salesforce or whatever.

“I call it more of a victory lap,” Sonja says of her walk of shame. As she sits on the terrace in a towel, her facialist blows up her spot by telling Kristen that her other client has seen Sonja hanging out with some long-haired dude. Encouraged to dish more dirt, she says she also heard that “[Luann] does whatever she wants to do,” i.e. is in an open relationship and that her type is “short French men.” Make this facialist the next real housewife, this is incredible.

By this point Sonja is wearing the baseball cap backwards and popping a pill, still in her towel. Sonja says that Carole’s ex Russ was hitting on her in St. Barth’s last season.

“Yes, you stole her ex-boyfriend accidentally” the facialist says, and I think we’ve crossed over into the realm of fan fiction, but Sonja gets all coy and “maybe I did” and Kristen is just taking it all in, open mouthed. Anyway, it’s time for the placenta masks.

Carole meets Luann later that day to gossip about Aviva’s text message debacle. They are both grossed out by Aviva’s encouragement of her father, and apparently Miss USA wasn’t even invited to the lunch, the implication being that Aviva asked her to be there to stir the pot. Kristen shows up and immediately discloses the rumor that Luann loves short French dudes because she likes to be dominant in the bedroom.

“There’s nothing small about Jacques.” Thanks Luann. The open relationship stuff doesn’t go over as well with her. Kristen seems a little bit too excited to pass the rumors on. She tells them the Sonja/Russ rumor too and Carole just sort of smiles, confused.

In the final part of the episode, Aviva is having the ladies over to help her hang art on her walls. She makes a huge deal about buying something from Luann’s daughter. Kristen shows up really fancily attired because she thought this was more of a gallery situation. Sonja shows up in an insane backless number, just because.

After pulling Aviva aside Luann immediately gets all “I don’t know why you would pass around such vulgarity at my ladies’ lunch,” which is a perfect sentence. Obviously this was a gross thing to do, but let’s not make a federal case about it. Luann calls Aviva on inviting Miss USA to stir the pot and Aviva swears that she didn’t invite her, while everyone else wonders desperately if there’s a garbage chute or something they can throw themselves into in order to escape.

Luann continues to be a snob about the situation while drinking rosé with ice cubes. I see you.

“Be a friend!” Aviva barks at her. “Your own daughter is making art about sex,” which apparently insulates her father from judgment?

Luann takes it to the “How dare you” place. Aviva tries to shift the blame to Heather for showing the girls the text, but Heather isn’t having it. I don’t know why everyone isn’t leaving this party. Thankfully we get to, since the episode is over. Next week: Ramona blacks out in Montana! 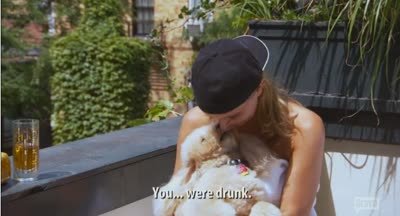