Four days before the legislative session in Albany ends for the summer, Bronx State Senator Gustavo Rivera and Brooklyn Assemblyman Karim Camara have proposed sweeping legislation granting full citizenship rights to undocumented immigrants living in New York state–legislation which even they admit will not get passed this session.

The bill that Mr. Rivera and Mr. Camara have sponsored will grant the right to vote in state and local elections, college financial aid, access to Medicare, drivers’ licenses, medical and chiropractic licenses and full civil rights protections to the three million-odd foreign nationals currently living in New York State without proper paperwork. The immigrants would be required to show proof of identity, proof they have lived in the state for three years, proof they have paid state taxes for three years, proof they have and will continue to obey state laws and a willingness to do jury duty.

Mr. Rivera openly admitted, however, that the proposal will almost certainly not overcome opposition in conservative quarters of the state, but argued it was a worthwhile effort nonetheless. A similar bill has been offered in the City Council.

“This is a bold idea. And we do not expect anything to pass quickly. But this sets things in motion,” Mr. Rivera, comparing the legislation to the push to legalize same-sex marriage, said at a press conference in Battery Park.

Mr. Rivera said that the defeat of Republican House Majority Leader Eric Cantor at the hands of the fiercely anti-immigration reform Tea Party candidate Dave Brat inspired him and Mr. Camara to put the bill up now, with only a miniscule window left in the current session for it to possibly pass.

“The defeat of Cantor has made it clear we have to act quickly to protect the rights and privileges of all people living in this state,” Mr. Rivera said.

The bill would only pertain to the undocumented immigrants’ interactions in New York State, and would do nothing to alter federal recognition of citizenship, federal border security, or federal deportation policies. 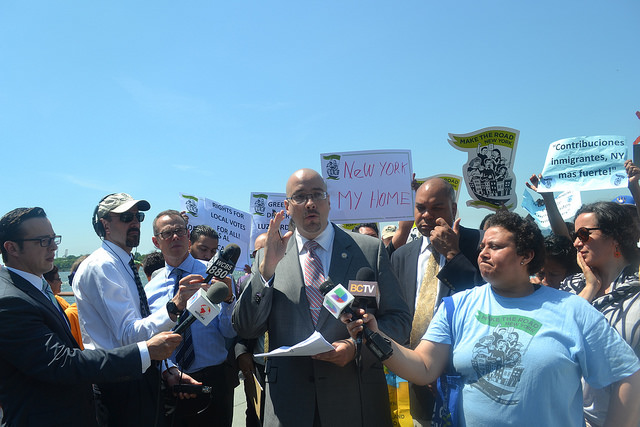