Last Thursday night, in one of the Brooklyn Museum’s cavernous fifth-floor galleries, a drummer sat about 40 feet above the ground on a remarkably well-constructed hodgepodge of wooden planks, plastic baskets and sheets of corrugated metal, tapping away on the cymbals of his drum set. Below him, two female singers stood on the same construction, purring harmonious oohs and aahs. With four other musicians, they made meditative electronic music that was evocative of running , blanketing the audience of about 300 clustered around them.

They were performing within Submerged Motherlands, an installation by Swoon, the Brooklyn artist whose given name is Caledonia Curry, and who is probably best-known for two fairly ambitious projects—the series of giant, rough-hewn portraits that she’s wheatpasted on buildings around Brooklyn and Manhattan since 1999, and for sailing into the 2009 Venice Biennale on rafts made from New York City trash, causing quite a scene. As it happens, the musicians were actually perched on those same rafts for the evening’s performance, which was titled “Submerged Collaborations” and included the screening of a fictional movie about those rafts.

Swoon’s installation, which opened in April and runs through Aug. 24, is really an epic recycling project. The two rafts, Maria and Alice, are visual bookends to the 60-foot tree sculpture, which rises up into the dome of the gallery. Its trunk is composed of strips of fabric that were dipped in instant coffee, paint and fabric dye. The leaves are white paper cutouts that resemble toilet paper. Behind this centerpiece is a gazebo with a bench on the inside where you can sit and look up at bits of cardboard worked into the shape of beehives. The gazebo’s exterior is wrapped in a double portrait by Swoon of a mother and her baby. The gallery walls, normally white, are a calm sea blue, which the artist spray-painted using a fire extinguisher.

The night had begun in a theater, with the New York premiere of the film, Flood Tide, which first showed at the 2013 Toronto Film Festival. Written and directed by Todd Chandler, it is based on the three-week-long trip from Troy, N.Y., to Long Island City that a group of artists, including Swoon, made on the rafts in 2008. “The whole world changes the second you hit the ,” Swoon told me after the performance, looking up at a rusty bicycle hanging from one of her rafts, which held about 30 people on the trip. As she ran a hand through her untamed red hair, she talked about wanting to bring that feeling into the installation with the event. “You feel freer on the , and everything starts to have so much more meaning.”

Filmed on the Hudson River, Flood Tide is filled with shots of perfect sunsets and picturesque waters. The film even has a cameo appearance by sound artist Pauline Oliveros, who recently had an installation in the 2014 Whitney Biennial. There was a feeling of camaraderie in the auditorium, since several audience members had been part of that journey. When a character in the film declared, “It took me two months to recover,” a woman a few seats over from me let out a sympathetic sigh.

When the film was over, the audience was led upstairs to the installation, where the musicians were waiting. Each person had been given a makeshift paper lantern made of a flat leaf-shaped cutout and a small LED, which flickered blue and yellow. Some sitting, some standing, they listened as the sounds of each instrument blended into one lulling, wave-like tune. On the ground, projections of blue and green lights mimicked flowing .

After the show, as people left the museum and walked off in various directions, the flashes of blue and yellow from the paper lanterns were still visible, even when the figures carrying them had faded. 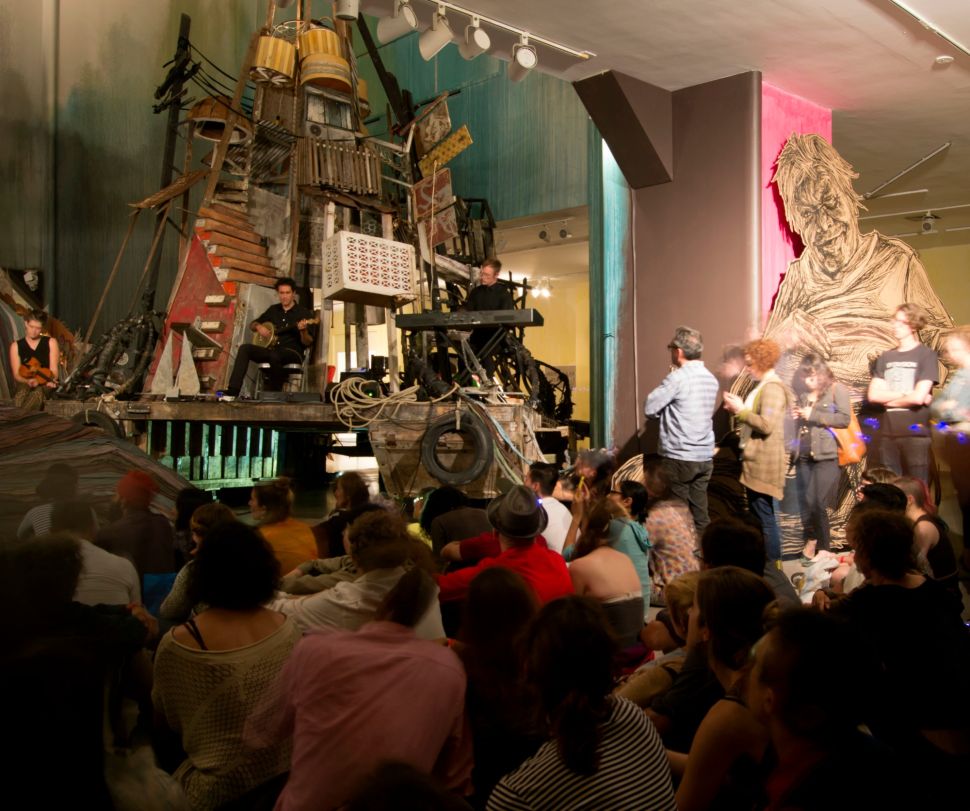