There’s no shortage of tears in The Fault in Our Stars, the movie version of John Green’s runaway best-seller for the young adult market about the passionate romance between two 18-year-olds with terminal cancer. But sensitive direction by Josh Boone, a carefully constructed screenplay by Scott Neustadter and Michael H. Weber, and a pair of beautifully calibrated lead performances by Shailene Woodley and Ansel Elgort raise the film above the level of tearjerker and give it a ballast that I predict will reach its target audience with no problem whatsoever—and maybe even touch a few other hard-hearted cynics along the way.

A large portion of intelligence is due to the original author, who based his observations about the courage and offbeat humor of the terminally ill on his experiences as a chaplain in a children’s hospital. There’s a lot of religious inspiration in the film I could do without, but the characters seem as real as inhaling. Worn out by surgery, needles, anti-depressants, sympathy, parental indulgence and eight prescription drugs three times per day, Hazel Grace Lancaster (magical, riveting Shailene Woodley) meets strapping, optimistic Augustus Waters (Ansel Elgot) in a cancer support group. Hazel drags around an oxygen tank, and Gus is hampered by a prosthetic leg, but they almost instantly discover a kinship forged from a no-shit philosophy and an admirably shared sense of cockeyed humor that jazzes up their outlook on life where medicine has failed.

Their attitudes and values may differ, but romance is inescapable. They do peculiar things because they’re unusual people. Her dream is to travel to Amsterdam to meet Peter Van Houten, a philosophical Dutch writer whose books have influenced her profoundly. Her family can’t afford to send her, but Gus has saved enough money to fly them both across the Atlantic. Another lung collapse that lands Hazel back in the hospital postpones the trip, but hope perseveres, and the big middle section of the film centers on the weekend in Amsterdam, where their idol turns out to be a seedy, rude, hostile and unpleasant man in a rage, swigging scotch in his dirty pajamas while driving them away in anger and despair. (As Van Houten, Willem Dafoe takes the scene hostage in a standout performance.)

With his unfailing optimism, Gus shrugs off the experience with, “Apparently, the world is not a wish-granting factory,” but Hazel’s devastation haunts her until the end before we at last find out the motives behind the Dutch author’s maddening mood shift. (He lives with a tragedy of his own that surfaces in the presence of mortality.) In this movie, even the intrusion of an enemy force is so realistically explained that all is forgiven.

The Fault in Our Stars has an ambiguous title I still can’t explain, and it would be just as agreeable at half the length. You get a pain in the ass just waiting for something to happen. But you also get the bravery of gallant kids whose lives are so out of sync with the ordinary happiness we take for granted that they are forced to think ahead, including planning their own funeral eulogies. You get compassion and intelligence instead of cracker-barrel homilies. And you get mesmerizing performances. No callow youth with big biceps, Mr. Elgort is the quintessence of every parent’s prayer for the perfect son, making his inevitable clash with fate doubly hard to take. Laura Dern is a model of silent pain masked by pragmatism as Hazel’s mother.

But it is really Shailene Woodley as Hazel who melts your heart with a dazzlingly fresh breath of air. She may not be conventionally beautiful by Hollywood’s definition, but she has an indirect sweetness, a paralyzing presence and a vast emotional range that defines star quality on the screen. As a girl who discovers, in death, the meaning of life, she is a rapture to behold. The camera loves her, and so will you. 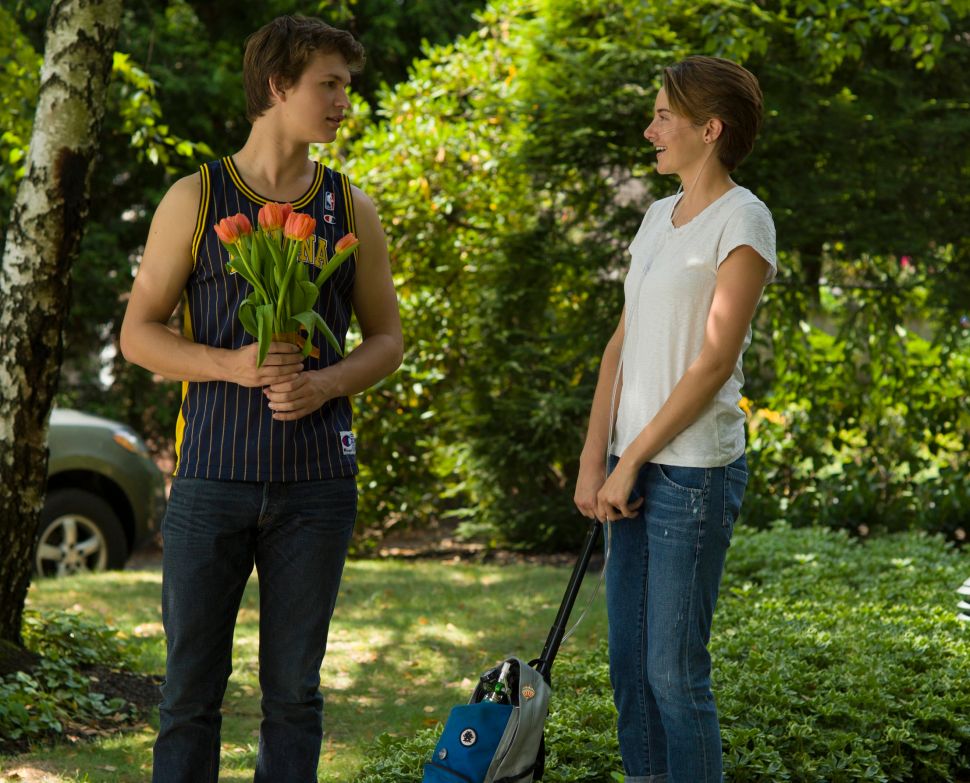