Maybe it had something to do with the break between episodes seven and eight, but last night’s episode of Silicon Valley — the series’s grand finale — was dull and disappointing. Richard and Monica’s relationship culminates in a predictable, cheesy romance, Jared literally adds nothing to the show, and the climax of the entire series comes down to a loading bar on a computer screen. Womp Womp. Also, Dinesh and Gilfoyle never hook up, which is lame.

When we left off, Erlich had just been viciously attacked mid-presentation on the TechCrunch Disrupt stage. At the start of last night’s episode, a banged-up Erlich and the Pied Piper team are meeting with a TechCrunch representative, who’s worried Richard’s attorney will take legal action against the conference. To avoid getting sued, he offers to send Pied Piper straight through to the finals. He also grants the team an enormous, tricked-out hotel room. “I’m gonna disrupt this bathroom,” Gilfoyle says as the team checks out their new digs.

Down in the presentation hall, Pied Piper watches as Gavin Belson presents Nucleus. He claims that Nucleus’s Weissman score — a fictional metric the characters use to measure compression speeds — is the best in the history of compression software. “Anyone who tells you that their platform is faster than our better have good lawyers,” he says venomously. Then he introduces Shakira, just to remind us all how monstrously screwed Pied Piper is.

“At best, we’re a worse version of Nucleus,” a dejected Richard says. The others still seem convinced they can win it. Erlich determines the best course of action is to act erratically and lash out at people, and goes off to find Gavin Belson. Jared — who’s been looking and acting like a spastic zombie throughout the episode — thinks the solution is to pivot their focus.

Jared proceeds to terrorize innocent strangers by polling them about what they’d like Pied Pier’s new focus to be. Should the app let users attract rodents? Determine whether they’ll go to heaven or hell? Prevent babies from being kidnapped? Everyone is thoroughly disturbed by Jared’s twitchy, strung-out demeanor. It’s unclear if he’s acting this way because he was stuck on a robot island for four days, or if it’s something else.

Erlich, meanwhile, tests out his “acting erratically” strategy by bombarding Gavin Belson as he’s being interviewed by a slew of reporters, including real-life tech journalist Kara Swisher. In front of the crowd of reporters, Erlich espouses a series of made-up rumors surrounding Gavin, including alcoholism, sexual activity at work and assault. Gavin doesn’t seem fazed by Erlich’s outburst. Perhaps people would take Erlich more seriously if his goatee were centered.

While Jared and Erlich fight to save Pied Piper, Dinesh and Gilfoyle contemplate jumping ship. In another part of the convention center, they approach a representative from Kwerpy — a startup that’s received millions in funding — and ask if they’re hiring. The Kwerpy guy confesses to them, secretly, that the startup is actually failing, and asks if Pied Piper would be willing to hire him. Hi, tech bubble.

Because women only exist in this show to be sexual objects, Monica and Richard continue to develop their totally improbable romance. After seeing Pied Piper’s horrible presentation in the preliminary round — the one in which Erlich was attacked by a judge — Peter Gregory has apparently lost all interest in the company, and has summoned Monica back to Palo Alto. She seems really sad to leave Richard, despite the fact that his personality is THE BLANDEST, he has zero confidence, and he frequently suffers terrible indigestion.

Remember crazy Jared? The police haul him into the station for acting like a total creep, but he’s soon released, and returns to Pied Piper’s hotel room. Here, he reveals the reason for his bizarre behavior: he’s been taking the Carver’s leftover Adderall. Jared’s subplots in the past few weeks haven’t contributed in anyway to the overall plotlines of the episodes. The writers should have left him on Arallon. Sorry, Jared, but it’s true.

In the hotel room, Erlich declares that despite Hooli’s superior product, he’s still determined to present the next day and win, “even if I have to go into the audience and personally jerk off every guy,” he says. The statement spurs the Pied Piper team into a conversation about how, mathematically, Erlich could possibly jerk off 800 men within the ten-minute presentation time. They determine that for maximum efficiency, the men would have to stand tip-to-tip, with Erlich’s hands moving from the “middle, out.” At the mention of this phrase, something clicks in Richard’s brain. He runs to his computer in an adjacent room and furiously begins to code.

Meanwhile, Monica has returned to Palo Alto. She starts to type a good luck text to Richard, apologizing that she can’t be there for the finals, but mid-way through, realizes she never should have left his side. She turns around and leaves her office, mere seconds after arriving. “OMG this is like the final airport scene in Garden State,” our notes from this scene say.

The next morning, it’s time for Pied Piper’s final presentation. To Erlich’s horror, Richard says he doesn’t have time to explain the changes he’d made to the code, and that he’ll have to do the presentation himself. Go forth, young grasshopper! We’ll admit, Richard’s determination is a refreshing change to his usual pathetic-ness.

When the Pied Piper team takes the stage, Erlich, Dinesh and Gilfoyle realize that Richard’s deleted all of the company’s pre-existing coding. Erlich warns the others that this is the last ten minutes of Pied Piper’s existence.

But Richard has something else planned.

“Hooli did everything we were trying to do better — way better,” he says. “Nucleus is built on the same engine as ours — like exactly the same — and their Weissman score was 2.89, same as ours. But the thing is they built a ton of really great stuff up on top of that, and we can’t compete, so now we have to be something else.”

“I was watching my friends have this argument about manipulating… data, and how many… datas could one guy manipulate at once, and I was thinking [of] something that I would call middle out, up and down, back and forth, all at once,” he says to the crowd.

Richard reveals that with his new programming style, Pied Piper’s Weissman score is 3.8 — even higher than Nucleus’s.

The judges are in disbelief of Richard’s claim, and ask him to demonstrate his product on an actual file. A judge hands him a 3D video file — something Pied Piper’s software has always failed to compress. Richard inputs the video file into Pied Piper, and the audience watches with bated breath as the software attempts to compress the file.

When the program’s done loading, Richard is dismayed to see that the compressed file its only 24 gigabytes, suggesting Pied Piper didn’t compress the entire file. Richard concedes that they’ve lost the competition. “At least it didn’t happen in a public and brutally embarrassing way,” Gilfoyle says.

But then Richard runs a Weissman test on the program, and scores a shockingly high 5.2. He realizes the video file was compressed in its entirety — it was just compressed to half the size they’d expected. “The climax of the whole series came to watching stuff load on a computer screen,” we wrote in our notes. “I don’t know what else we could have expected but meh.”

Anyway, Pied Piper wins the $50,000 first-place prize, and Richard is courted by flocks of investors backstage. He shares a ~tender moment~ with Monica, who congratulates him and says that Peter was “not un-pleased.” Then, she enthusiastically begins telling him about how much crazier his life is going to get. Richard looks like he’s going to be sick. Because this show seems disturbingly intent on making us all look at vomit, Richard runs outside and pukes into a dumpster. Nice.

Our greatest hope for Silicon Valley, Season Two is that Richard is able to steer Pied Piper toward success. And that he learns to control his digestion. Seriously. 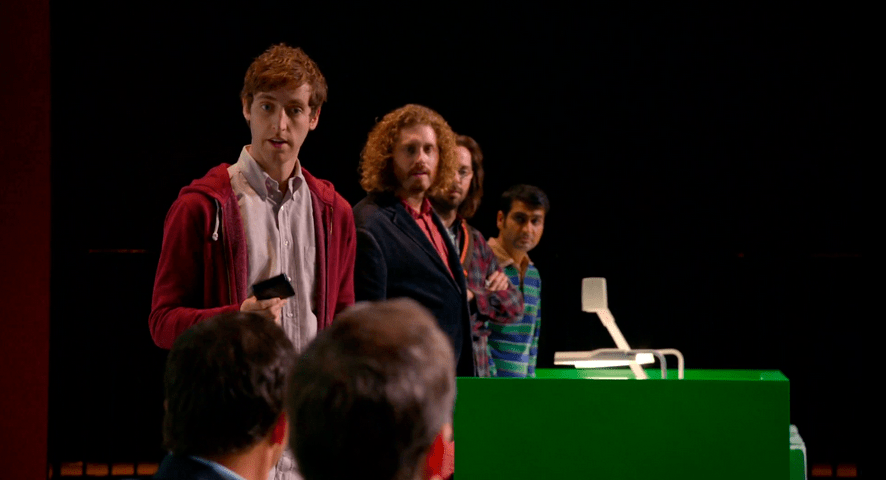