TRENTON – The optics created more than a few grunts of discontent.

There was Gov. Chris Christie shagging softballs with Boomer Esiason while members of the Democratic caucus once again found themselves crammed into a chamber feeling gamed.

There were jokes about the governor circulating through the caucus room, as members tried to buck one another’s spirits with cracks about Christie’s middle-aged audacity to suit up like a kid in a Matt Christopher novel while the state gets shutout by a budget crisis.

But ultimately a very grim political mood prevailed, as Democrats anticipated the governor having it in him to hang up the cleats and come back insisting – with red pen in hand – that he alone – not those members of a tax-raising Dem caucus – is the adult in the room.

Following a backroom agreement by Senate President Steve Sweeney (D-3) and Assembly Speaker Vincent Prieto (D-32), Democrats today will pass a single budget plan out of the senate and assembly committees that would raise the marginal tax raised from 8.97 to 10.75%, the corporate tax rate from 9 to 10.35% and impose multiple new fees.

The governor has his own plan to close a budget gap by stripping $2.4 billion out of the state pension system, putting him on a collision course with Sweeney and Prieto, who prefer the targeted tax hike option.

While Christie swung for the fences in Yankee Stadium, he enlisted Assembly Minority Leader Jon Bramnick (R-21) to take the bat out on the Dems’ proposal back at the N.J. Statehouse. “No more taxes,” Bramnick said. “Not now. Not $1.6 billion. [The Democrats] are raising the price of living in New Jersey, and are playing to a specific constituency, not to the average taxpayer.

In the caucus room, Assemblyman Joe Cryan (D-20) and others tried to persuade his fellow Democrats not to fall prey to Christie’s politics, sources told PolitickerNJ.

In a backroom debate yesterday, the former assembly majority leader asked his colleagues to consider across-the-board cuts at roughly 4%.

That sparked some back and forth.

Cryan’s considerations stem in part from an unwillingness to enable Christie to play the part of belt-tightening budget paladin back from the dugout to lecture everyone on fiscal restraint.

Assemblyman Gary Schaer (D-36) sided with Speaker Vincent Prieto (D-32), who said there’s “stuff in the budget we cannot touch,” according to sources in the room.

The recommendation of “across-the-board cuts” sounds good, but would mean turning out the lights in certain segments of state government – and job layoffs, sources say.

It would also mean significant reductions to higher education and charity care funding, which in part form the cornerstone of budget priorities surmised by the South Jersey Democratic machine ultimately in control of the party.

Safeguarding those items and others take priority over the consequences of cuts, which Cryan and some others at least argued would project sufficient chutzpah to nullify Christie’s attempt to make Democrats look fiscally irresponsible with the millionaires’ and corporate tax hike proposals.

In the process, they unify Republicans behind Christie – movement conservatives like Assemblyman Jay Webber (R-26) among them – and give a pedestal to a governor not only swinging a bat at softballs – but increasingly at those damning storylines like the one in the New York Times this morning concerning ongoing investigations into the Port Authority of New York and New Jersey.

“There’s no doubt he [Christie] is masterful at the political fight,” one caucus source acknowledged to PolitickerNJ, noting a fascinating occurrence.

Christie presented his budget, then new numbers came in showing a tax revenue shortfall on this governor’s watch.

The governor identified the pension system as the place to find the money, reversing himself on a deal he struck with Sweeney three years ago but finding his base favorite narrative in the process, which the Democrats appear willing to bolster.

“We have lost a sense of what this conversation is,” a source said. “We are substituting a conversation about meeting our obligations and needs with the rhetoric of taxes versus no taxes.”

Bad for the state?

But politically, the source said, it’s a Christie homerun. 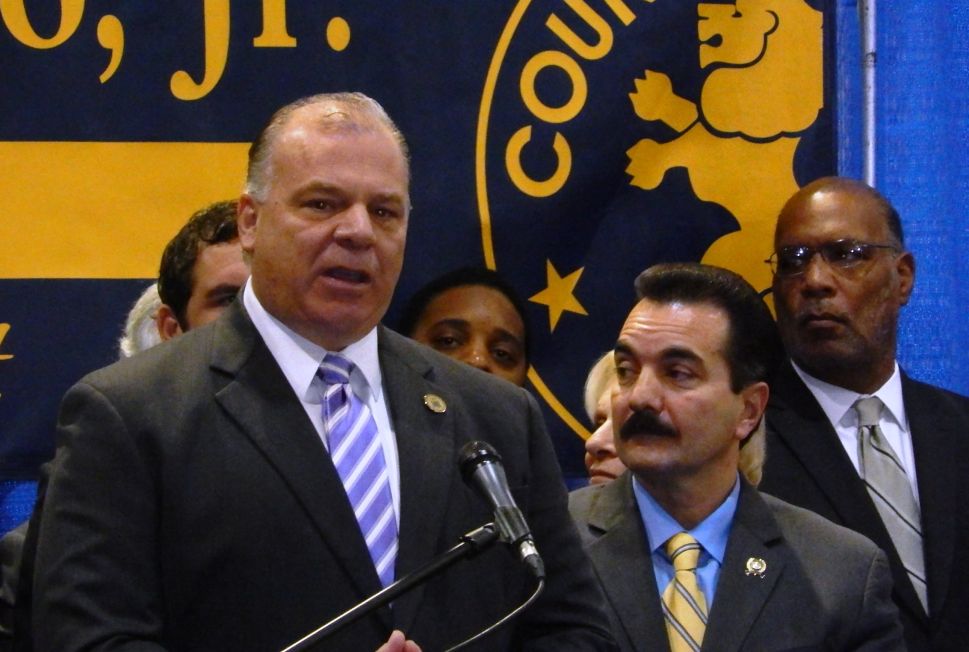