“I was into music before I was into art,” Sanford Biggers said, settling into a brown leather couch on Thursday night at Neuehouse, the coworking space that tries very hard in the Flatiron District. Mr. Biggers has been on a roll with art recently—he’s had a string of solo shows, and he has a sculpture prominently on display at the Brooklyn Museum—but he spent the evening focusing that earlier passion, deftly working a keyboard before a crowd of more than 500 with his band Moon Medicin. (Incidentally, the work at the Brooklyn Museum, 2007’s Blossom, is a grand piano that has somehow become embedded in a tree.)

Mr. Biggers played with the four other band members in the space’s warehouse-like lobby, with many people sitting on the steps of a wooden amphitheater and others clustered around the sides at moshpit-style closeness, listening as the band shifted over the course of an hour from jazz fusion to rock to electronic remixes of R&B and rap classics like Grandmaster Flash’s “The Message.”

Above them, a video played with images that were as wide-ranging as the music. There were clips of John McCain, solar eclipses and the opening to The Twilight Zone with Rod Serling’s authoritative bass. There was also footage that Mr. Biggers has used in his previous works, like a picture of the faceless grin that has shown up in several of his installations, called either Cheshire or Blackface Minstrelsy depending on the context. He favors images that can be interpreted as amusing or unsettling, depending on how people come at them—the same could be said of the video footage. “The band is tight, we can play,” Mr. Biggers said, “but it’s not so much about that. It’s about being a showcase for more challenging ideas.”

Moon Medicin—named after Mr. Biggers’ 2010 show of sculpture and video at the Contemporary Arts Forum in Santa Barbara, Calif.—has been together in various forms for about 10 years, with Mr. Biggers and lead vocalist and guitarist Martin Luther as the senior members. The current version includes those two as well as bassist Mark Hines, Jahi Sundance, who works turntables, and percussionist Swiss Chris.

The scene was a mixture of a night at the club and an office party, bathed in black light. A body painter drew a dizzying pattern of pink and turquoise swirls on a topless model. Nearby, two men in gray suits chatted—“Just been doing the tech start-up stuff, you know, same old, same old.” Suits and heels dominated, so Moon Medicin stood out in their white hazmat jumpsuits splattered with neon paint. Their faces were hidden behind gold rubber masks that were bent out of shape with large lips protruding ominously.

But even if their faces were hidden, it was clear they were having fun. At one point, they spoke the lyrics of “Lift Every Voice and Sing” to the tune of Prince’s “Controversy.” On the screen flashed the lyrics, the word “controversy” and all sorts of found footage, from vintage war clips to Miley Cyrus grinding against Robin Thicke at last year’s Grammys.

Though Mr. Biggers is spending a fair amount of time on Moon Medicin, he’s still hard at work in his art career. He’s long operated without a gallery in New York, where he’s based, but that may soon change. “In the early years it was more about choice, and then I was busy enough that I wasn’t seeking representation,” he said. Now he’s in conversations with a few galleries in the city.

About halfway through the show, as everyone inside was scarfing down crab sandwiches, it began to pour outside. The band started to play a lullaby-like ballad called “The Great Escape.” At one point the bassist stopped, the drummer traced his drumstick around the edge of the cymbal, and the singer shifted into a sweet falsetto, singing, over and over again,“This is the great escape.” 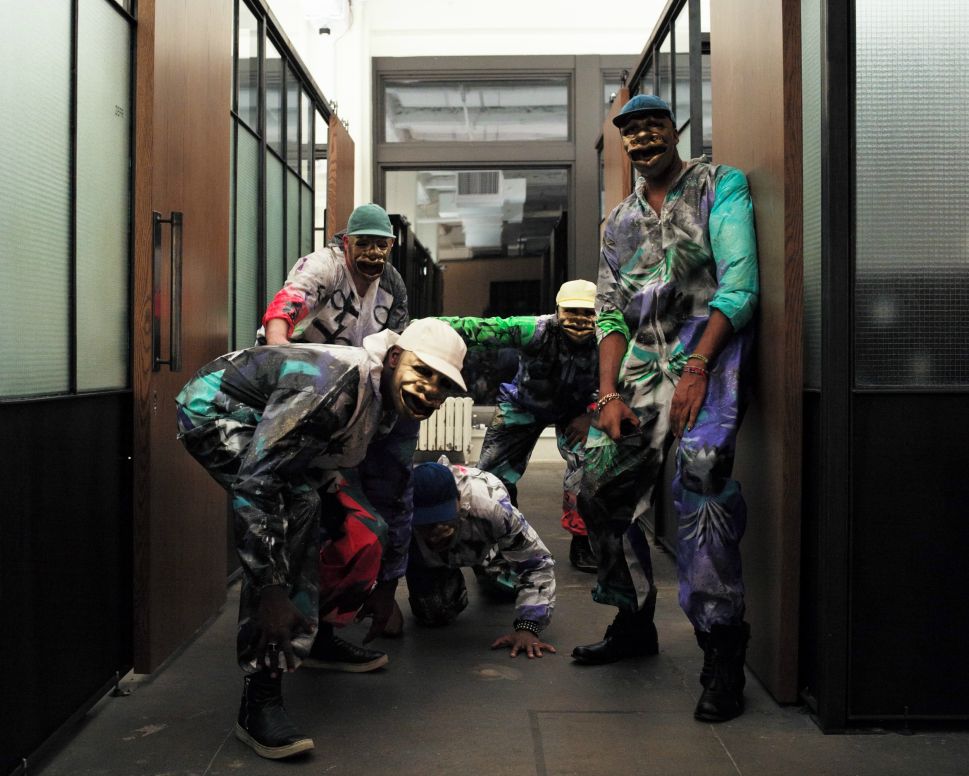