Last week’s Art Basel really performed. On a market level, this has always been the case. The fair, now in its 44th year, is the most important event of its kind for modern and contemporary art—even in the depths of the recession, millions of dollars worth of art changed hands here. But this year it also performed in another way, with impresarios Klaus Biesenbach, director of MoMA PS1, and Hans-Ulrich Obrist, co-director of London’s Serpentine Gallery, bringing a performance art extravaganza to the fair.

On Tuesday morning a mosh pit of millionaires in fancy sunglasses converged outside the convention center, and watched a giant clock tick down the minutes until 11:00, when the VIP preview would begin. At the top of the hour a scrum formed, briefly engulfing Peter Brant and his seersucker pants.

Inside, Gagosian Gallery was selling a Jeff Koons sculpture of the Hulk pushing a wheelbarrow of flowers, reportedly priced at $4 million. Over at David Zwirner, Alberto Mugrabi, of the Warhol-collecting Mugrabi family, was giving some serious attention to Dolphin, a Koons from 2007–13. Mr. Zwirner told us that this was “the best first day we’ve had at Basel.” Lisson, the blue-chip London gallery that will soon open a New York branch, sold 70 percent of the works in their booth, including a large blue Anish Kapoor orb that director Alex Logsdail called “not for the faint of heart.” At Hauser & Wirth, someone had put on hold a work by Yves Klein and Jean Tinguely, La Vitesse totale (Bleu affolé), from 1958. It was for sale for $6 million. Word soon got out that Skarstedt had sold Andy Warhol’s 1986 Self-Portrait (Fright Wig) to an American collector for somewhere around $35 million.

Whoever wasn’t busy buying or selling was at Messrs Biesenbach and Obrist’s “14 Rooms,” where visitors pinballed between separate enclosed quarters, each containing a different work of performance art. It was an art-world carnival, complete with a hall of mirrors.

“There was this moment where the mirror was replaced by the camera,” said Mr. Obrist, on a press walk-through.

“I could never think I could take a picture and show it to people, but now with social media, I can,” said Mr. Biesenbach.

There was a ban on photography inside “14 Rooms,” a surprise given the curators’ enthusiastic approach to Instagram—Mr. Biesenbach with his stream of selfies with James Franco, and Mr. Obrist with his series of handwritten one-liners by the likes of Yoko Ono and Kanye West. Mr. Obrist told us excitedly that the founder of Instagram came by the exhibition.

Inevitably, much of “14 Rooms” made it onto social networks: Damien Hirst’s two identical twins reading the same Jodi Picoult novel; Marina Abramović’s nude woman suspended on the wall; and Jordan Wolfson’s now-famous robot that was recently on view at David Zwirner.

Most Basel selfies were probably taken at elaborate gallery dinners. Gladstone, Regen Projects, and others, threw one at an 18th-century estate that concluded with guests indulging in Davidoff cigars in a gold flake-lacquered parlor. Dasha Zhukova, Daphne Guinness, Tina Brown and Eli Broad hosted an A-list affair at the Kunstmuseum, complete with the appetizer of Ms. Brown interviewing Matthew Barney. After dinner, per Basel tradition, the vortex of the Kunsthalle Bar sucked revelers in for hours of Campari and soda and smoking and dancing.

Last year, with several pop-up clubs in town, it seemed like the raucous spirit of Art Basel’s sister fair in Miami had descended upon the sleepy canton, but this year none showed up. No Le Baron, no Silencio—and no Kanye West. Dealer Emmanuel Perrotin hosted a bash on the docked party boat Das Schiff, where Le Baron had set up shop, but even the usually peppy Mr. Perrotin said it was less hopping than he would like.

One venue did South Beach-ify, though, and it was an unlikely one. Since it was founded in the 17th century, Rhine-side luxury hotel Les Trois Rois has seen its share of nobility. Napoleon stayed there. So did Queen Elizabeth II, Thomas Mann and Picasso. Last week, it saw something that, for this stately building, is considerably more exotic: a bouncer.

On Monday night, Ms. Zhukova was there with a crew that included dealer Vito Schnabel, Phillips auction house specialist Ben Godsill and Alberto Mugrabi. Tuesday saw hedgie Steven A. Cohen in a festive mood, speaking to some young-looking dealers. (Could it be he who’d bought the Warhol?) By Wednesday, things had ramped up. Around midnight, Gavin Brown, surrounded by a screaming, mewling mess of long dresses and colorful suits, was one of those who went unrecognized by the bouncer. Dozens of well-heeled patrons of the arts tried in vain to get into what had, overnight, become the hottest club in Basel. The only people to gain entry after midnight were those Larry Gagosian personally vouched for.

All of this fuss just to join an over-packed balcony and pay 50 francs for a glass of champagne, watch gorgeous women with thick accents cling to the arms of megacollectors, and overhear chest-thumping over sales.

“I have never seen this before,” said Michael Kampmann, the head bartender of The Three Kings. “We have never, ever needed a bouncer at the door. I guess people were celebrating.”

On Friday night, the lucky few still in town boarded a bus that barreled out of Basel due north, crossed the Swiss-German border and sailed into the center of the Black Forest until it reached Romantik-Hotel Spielweg in Munstertal. There, on the cusp of the Summer Solstice, Russian-born art doyenne Maria Baibakova was hosting an opulent dinner in honor of ArtBinder, the iPad app launched three years ago by the 27-year-old Alexandra Chemla.

Laid out on the dinner table were portions of pâté, salmon tartare and white asparagus fit for a kaiser. At last, the art world could stop talking sales and start taking flaming shots of schnapps. The liquor flowed for hours, until a group convened by the fireplace to bellow rousing drunken renditions of their national tunes: “La Marseillaise,” “God Save the Queen,” “The Star-Spangled Banner.” Perhaps it was time for everyone to go home. 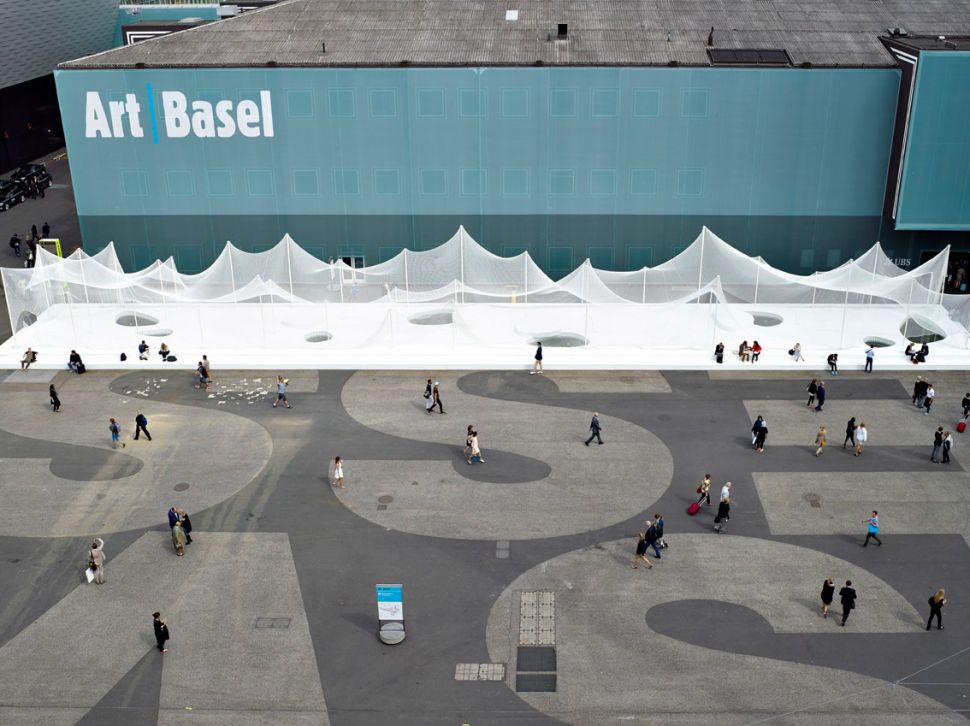