You might have heard that Instagram has taken over the art world. Yes, I’m on it, and I follow several people, not because I want to, but because I feel I have to. Everyone must follow artists like Richard Prince, Wade Guyton and Alex Israel, as well as all the sundry dealers, advisers and collectors trying desperately to be cool.

The number of people posting images on this silly app is off the charts. Instagram is custom made for the art world: you get a quick flash of an image with virtually no text or explanation. There’s no need to read. It’s perfect for people with zero attention span, zero education and zero interest in learning about anything—perfect, in other words, for the art collectors of today. You could go so far as to say that the successful art of this current generation must be Instagramable to succeed, and if it doesn’t look good on Instagram, it ain’t working in this instant-gratification art world: goldfish have longer attention spans than ‘grammers.

When you ask someone if they saw “so and so” on Instagram and discover they don’t use it, you know that person is totally out of it. Everyone who is anyone is into it, and posting regularly. I especially like when dealer/collectors like Niels Kantor or the irrepressible Stefan Simchowitz post something they want to heavily promote, so they can do the ole’ “pump and dump.” It’s become critically important art intel to see what loony games this cast of characters is up to, because you know they own 20 of anything they are posting. Heck, they’re just waiting for someone to text them asking, “How much?” so they can reply, “How many?”

Instagram has also been a place where some interesting and not unimportant innovation has occurred, albeit in a gumshoe way. The auction exec/croupier who used this to his best advantage was none other than Christie’s own buccaneer Loic Gouzer. Weeks before his personal trophy sale, “If I Live I’ll See You Tuesday…,” was scheduled, he began to release sneak previews of its star lots, creating suspense and buzz around what frankly was just one more art auction in an already overcrowded week.

Mainly, though, Instagram is where you go to learn about who is buying and selling young art. When artist Will Boone posted selfies at the Rubell Collection in Miami last week, don’t you think he was telling us something? He’s selling and the Rubells are buying. Richard Prince is an active Instagram-er. He especially likes to post a stream of big boobs, or porny waifs, but he ran afoul of the app when he posted his 1983 classic Spiritual America, a photo of a 10-year-old naked Brooke Shields, and was for a short time shut down. Still, there is a large part of the Instagram experience that I don’t care for, namely the pictures of kids and dogs and swimming pools and the endless stream of inane party shots. Yuck. I don’t like 50-year-olds posting pictures of themselves when they were 20 and hot. And I find equally distasteful the silly self-indulgent sexy selfies. They amount to a dirty little online scrapbook, one that I have no interest in perusing.

By now you are probably wondering what I post on Instagram. The answer is, nothing. I have an account, but haven’t posted a single image, satisfying myself instead by writing cheeky little messages on friends’ posts, like when I wrote on Maria Baibakova’s party picture, ”it’s past your bedtime!” or when I tagged a photo of Dan Loeb posted by the Instagrammer known as “ICallB” as “better looking than George Clooney and richer.” In the same way that posting personal pictures on Instagram feels inappropriate and prurient, writing trash talk on the bottom of other people’s pictures is fun. I love it. It’s the scrawl on the bathroom stall, for the iPhone.

My all time favorite Instagrammer is that anonymous “IcallB,” slang for “I call bullshit.” Search for it, and you’ll find art-world luminaries taken to task and called out in a gratuitous, irreverent, anarchic rant. Glenn Lowry and Nick Serota are lampooned in a duel of dryness;  the much-loved Paul Schimmel is dubbed “far too enamoured by the sound of his own voice.” Popular art adviser Meredith Darrow is called out as the “guiding light of bad taste.” Susan and Michael Hort, an old-school art-collecting couple, earn the tag “you think you matter but you don’t.”

No one gets away with it on “IcallB.” Sarah Lucas’ show at Gladstone Gallery is “easily one of the worst shows of the year if not the decade,” while David Zwirner gets the comment “feel embarrassed for you.” It’s all just so wrong that it’s right on the money, like when Aaron Curry’s outdoor installation at Lincoln Center is tagged “look what shat on Lincoln Center” and popular performance artist Tino Sehgal is called out as “bullshit performance for soccer moms.” No one is spared—not even yours truly. A picture of this very writer was posted in IcallB and captioned “Venus over my Ass,” a reference to my gallery Venus over Manhattan. What nerve!

But who is this mysterious “ICallB”? Could it be the edgy artist Mark Flood? Could it be the devilish Downtown dealer Eneas Capalbo (the Peter Lorre of the art world) or perhaps the picaresque and irrepressible Jose Martos? Maybe Maurizio Cattelan has quietly come back from retirement, or might it be my favorite L.A. disruptors, the guys from SellYouLater.com? Some, like Stefan Simchowitz, have lost patience and repeatedly demand that the felons behind ICallB step forward and reveal their identity. I too want to see Zorro unmasked—but not quite yet. There’s still plenty of good mud to sling, so I say go for it, IcallB, and keep us laughing. The art world takes itself far too seriously.

Correction: June 17, 2014: An earlier version of this article incorrectly referred to a photograph of Dan Loeb as a selfie. It was an image of Mr. Loeb that appears on the Instagram account ICallB. 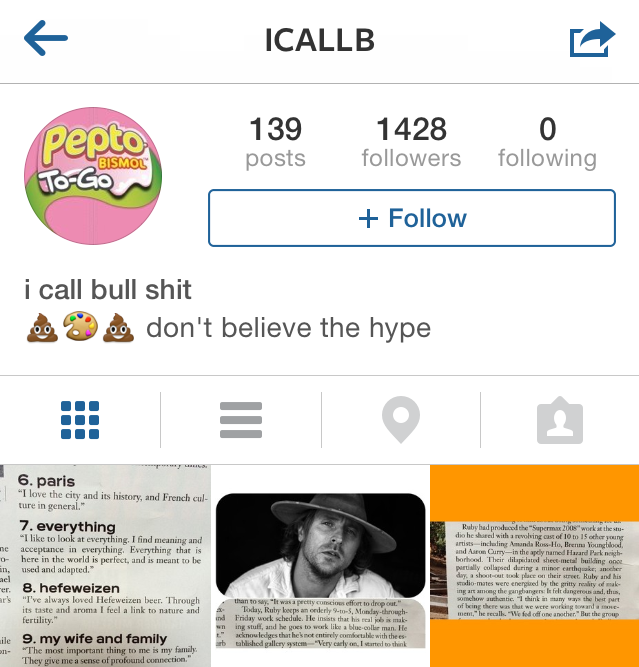