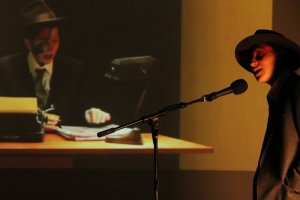 Rachel Mason performs with her film. (Photo by Marcela Pardo)

Up on the screen of Williamsburg’s Spectacle Theater on Friday night, as Rachel Mason pounded away on a typewriter, dressed like Cary Grant in His Girl Friday, Ms. Mason was also standing a few feet from the front row, in the flesh, gazing at the audience in the same 1930s get-up, brown fedora obscuring one eye.

She was performing along with her 2013 film The Lives of Hamilton Fish (which was having its New York premiere), a work that she has described, pretty accurately, as a “karaoke rock opera.”

The film’s story was told through songs, like an opera, and like karaoke, Ms. Mason sang live with the film’s soundtrack. But instead of having various characters sing their lines, Ms. Mason did it all. Even when a tall, burly man appeared on the screen, Ms. Mason’s velvety soprano flowed.

The plot was even more peculiar than the medium, and it was based on a true story.

It seems that two men, both named Hamilton Fish, died a day apart from each other in 1936, and their death announcements ran next to each other on the front page of the Peekskill, N.Y.’s Peekskill Evening Star. One was a serial killer and cannibal, who had been executed in Sing Sing’s electric chair. The other, more familiar Mr. Fish was Hamilton Fish II, a member of the House of Representatives and the son of the 16th Governor of New York.

Ms. Mason discovered this unlikely coincidence in 2005, while she was volunteering as an art teacher at Sing Sing, and was fascinated—all that good and evil bound up in the same name. But it wasn’t until she met—purely by chance—a descendent of the statesman Fish, Hamilton Fish V, that Ms. Mason decided she had to pursue the story. She composed 20 songs from the perspective of the Peekskill Evening Star’s editor, the role she plays in the film and sang on Friday night.

In the past, Ms. Mason has delved into a range of art forms, from performance art to sculptures of political figures (including a piece titled Kissing President Bush, in which she depicts herself in a lip-lock with W). Why a musical rock-opera feature film? “I wanted it to be a kind of fantastical journey,” Ms. Mason said. “I don’t think it has to be performed live, but when it is, it doubles the experience. It brings the film into the room.”

Sometimes the film literally fell into the room. Performing in the few feet between the screen and first row, Ms. Mason occasionally dropped into the laps of startled audience members as she swayed to her soft rock music. Next to her, on the floor, musician Camilla Padgitt-Coles played a synthesizer. Those sounds, combined with the acoustic guitar in the film soundtrack, enveloped the 30-seat theater. But the gentle power of Ms. Mason’s voice made it clear why the piece had to be performed live. Soothing yet haunting, her voice made the story intimate. The history became tangible.

Behind her, visuals brought the eerie tale even closer. Ms. Mason made a point of filming in historical locations. Scenes took place at Sing Sing, the Garrison Institute on the former estate of Governor Hamilton Fish and the Morris-Jumel Mansion in Washington Heights, where Ms. Mason has plans to perform the film.

“I like the idea of the history being lived again in the same spot,” she said. 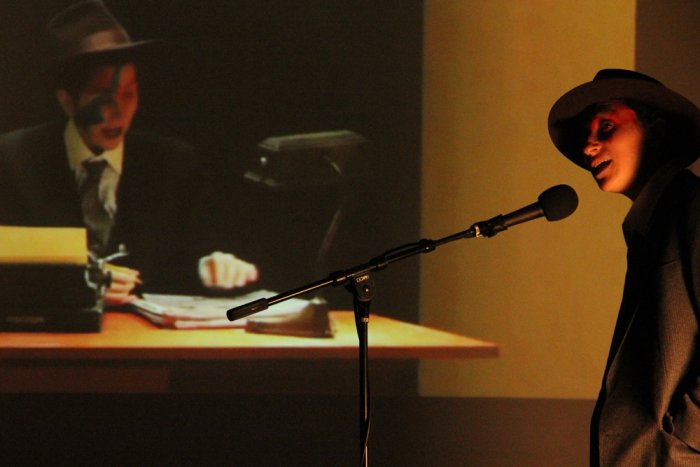