Grabbed by a touch of whimsy, I recently decided to bleach my hair platinum blonde. Shouldn’t every woman try it once, I thought? Also, O.K., I’m going gray, so a full bleach job seemed like a good way to conceal it.

I called my hairdresser, Mala Elhassen of Carlo Marco Studio in the West Village, and booked the journey to the la-la land of Marilyn-hued blondes. The result was thrilling. I breezed on to the street feeling sassed to the nines.

“You’re going to get a lot of attention,” Mala warned as I strode off to the train.

What is it, 1980? I wondered. Maybe being blond is a time-travelling device. A few others leered at me—some cute, some not so. The real test would be at my night job: bottle-service waitress at a Midtown nightclub. Would being blonde be profitable?

“I don’t love it,” one co-worker said after staring at me for a good three minutes.

Be prepared when you make a drastic hair change: people feel compelled to comment. I put on my work uniform, a black dress with a tiger on the front, and started my shift.

“Are you from California?” an intoxicated man asked me.

“You’re an all-American girl, aren’t you?” commented another.

The majority of the clubgoers I encountered—mostly men—seemed to prefer blonde. I went home with $600 in gratuities, $200 more than usual.

Mala had been right: I was getting more attention, but not all of it was wanted. After reveling in my blondness for a few days, I ended up hiding behind shades and a pulled-back bun.

Then came the realities of being ultra-blonde—the upkeep of dark roots, the gray dissipating into a general sludge. Then, to extend a blowout, using so much dry shampoo that hair actually started to break off. I decided to tone down to a darker shade using a home dye. The associate at Ricky’s in Midtown assured me I was purchasing a “semipermanent” gloss (maybe it was my fault that I purchased dark ash brown rather than medium). Back home, after following the instructions, my hair turned out a lot darker than I was hoping—mud-hole-by-a-swamp dark. I looked up from the sink and felt a horrible prickle on the back of my neck, and it wasn’t a reaction to the chemicals. So much for the toned-down, dirty blonde I envisioned.

No time to weep—I had to get out and get on with my day, while catching some strange looks from my doorman.

“You look so skinny,” said my regular barista at Starbucks. He completely ignored that my hair was a different color from the day before, but because he told me I looked thin, I let it slide.

“You look like you’re into SMS,” said a girl at the gym.

When I arrived at work, a girl who annoys the hell out of me said, “Hi, nice to meet you.” Bonus!

So my shift began. I approached a man to offer him a beverage. He looked at me in horror and waved me away.

I made an effort to smile each time I sauntered over to a new table, but it didn’t seem to matter. No one liked this brunette.

A newer co-worker approached me and started a conversation in Russian. I stopped her midsentence.

Another waitress informed me that I had joined the brunette team.

“You’ve made the right choice,” she said, hugging me. “Men love brunettes. They want to take care of them and marry them. Blondes are just the girls they want to have fun with.”

Hm. When I met my husband five years ago, I was a brunette. Settling into our committed relationship, I eventually started highlighting my hair, which led to my evolution to blonde. So maybe the trick is to snag a man as a brunette, then go blonde?

As my shift went on, I realized the financial ramifications of my poor hair decision. A man even offered to buy me some fajitas. (I politely declined.) No one had ever offered me food as a blonde; people just wanted to get me drunk. I finished my shift with $200 in my pocket, one of the least profitable nights I have ever had.

Something had to be done. I sent Mala a text: “Please help. It’s the hair.” The next day, I removed my hoodie at the salon, which thanks to my D.I.Y. job had taken on green and gray highlights. Mala then skillfully transformed my stressed-out locks into a lovely shade of strawberry blonde, or, O.K., red—finishing in time for my third shift of the week and my third hair color.

Heading to work, I was not ignored, but there were no comments or catcalls. A lot of smiles were exchanged with passersby, and I felt a kind of cheerful, relaxed sensation, probably because I’ve stopped resembling the girl who climbs out of the well in The Ring.

“Oh, good, you fixed it,” said the barista who said I looked skinny a few days earlier.

“Much better. It brings out your green eyes,” another friend commented.

“I can’t believe you made it lighter,” the brunette team leader whom I had bonded with during my last shift said, shaking her head. “It’s good, but I like it darker.”

“Are you a redhead?” one man asked, as if it were a dealbreaker.

“Obviously,” I smiled, flipping my hair to the side. He didn’t order from me and went with a brunette waitress instead.

However, all the other customers I approached were receptive to ordering their beverages from me. I engaged in conversations with customers for most of the evening, which led to more gratuities, and in the end I went home with a whopping $800, proving that in the club game, gentlemen do not seem to prefer blondes. As for co-workers, their take on my third color change for the week was that I appeared friendlier as a redhead. Now I’m sticking with strawberry blonde and slowly incorporating highlights back into my new, financially winning streaks. If things slacken up, I’ll  go right back on the (red) bottle. 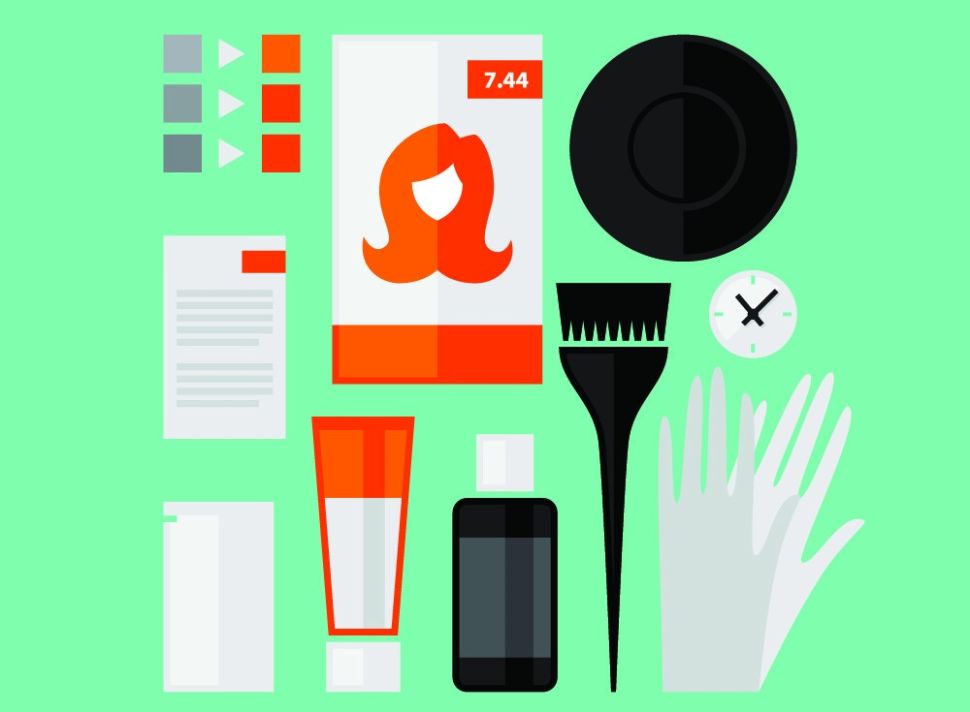