It was 10 a.m. on a Saturday as I tried to navigate my way around a mosh pit, a flurry of motion patched together by plaid and safety pins. I tried not to stand too closely behind the girl in the studded denim vest or the guy with extra-spiky, Manic Panic-dyed hair.

No, I wasn’t hanging out at a warehouse show in Williamsburg. I wasn’t at a dive bar on the Lower East Side. I wasn’t even at the Vans Warped Tour.

I was at Pier One on the North Shore of Staten Island.

The eclectic mix of teenage mallrats and dreadlocked families were taking in the sounds of Punk Island, one of Make Music New York’s special events. And in my quest to document the different shows during the city’s largest free outdoor music festival, I was one of them. From 10 a.m. until 10 p.m. on Saturday, the festival transformed the city’s public spaces into performance stages for artists of all stripes—876, to be exact. Punk Island was just my first stop of the day.

I found the festival largely by following my ears. I parked my car and immediately heard the loud, fast, aggressive sound of punk rock from the Ferry terminal’s parking lot. The farther I walked, the louder it got but there were no stages in sight.

Then I spotted a man with a tall green Mohawk walking with two other black-clad figures in the distance. If anyone knew where Punk Island was, it would be that dude, I thought.

I walked up to him and asked, “Did you just come from Punk Island?”

“Yes,” the gentleman replied. I mean, he had a green Mohawk and a black denim vest. Of course he did.

When I finally arrived, I found a series of tents and speakers set up along the pier. The audio onslaught of guitar amps cranked up way past 10 was almost deafening, and I was silently wishing for earplugs.

Of MMNY’s 876 performers, Punk Island provided a nice chunk with over 90 bands. Each represented a different subgenre of punk rock. At one stage, rude boys in skinny ties skanked to ska-punk. At another stage, biker dudes moshed to thrash punk under the warm solstice sun. Staten Island swarmed with the Lower East Side dive-bar crowd, bringing the same amount of grit and grime to the North Shore.

After three hours taking in the scenes of dyed hair and moshing, I decided to make my way over to Brooklyn for acts less violent in nature. I wanted to catch African Americana, a New York-based indie DJ duo, along with a series of other more mellowed acts.

After stepping off the 5 train, I followed my ears once again to the top of the hill at the Prison Ship Martyrs Monument in Fort Greene Park. A modest crowd gathered to watch the variety of musicians representing the hip-hop, funk, jazz and soul genres. The audience was quite the contrast from Punk Island—these concertgoers were older and had slightly different takes on style, with men wearing seersucker button-down shirts and straw fedoras. They were the perfect mix of Lower-Manhattan-jazz-club-cool and Brooklyn-hip. It was a different type of hip, a more mature version of the kind of crowd I would normally expect at indie music shows in the borough.

African Americana was long finished by the time I got to the park, and instead I heard Fresh Daily’s synth-infused hip-hop from afar. But when I found my way across the never-ending park, the Brooklyn-based rapper had already finished his set. NYC-based Maritri Garrett and Friends were quick to take his spot, and did not disappoint, treating the crowd to some of their blues, jazz and folk influences.

Leading a trio called the Soulfolk Experience, musicians V. Jeffery Smith and David Pilgrim joined Ms. Garrett onstage. Soulfolk Experience’s resume includes some heavy-hitters like the Five Blind Boys of Alabama, Daryl Hall and Me’shell N’degeocello. Judging by all the toe-tapping going on in the crowd, everyone felt the vibes from her soothing voice. They leaned their heads back and closed their eyes, taking it all in along with the sun and the cool breeze wafting through the trees.

One of the standouts was Brooklyn’s (i am) isis, an electric-funk act with bluesy rock and indie soul. During “Drive Me”, one guitarist concocted a riff so vibrant and distorted, I almost felt I was watching Rage Against the Machine. The pulsating bass guitar beat rhythmically in my chest. Coupled with female vocalist isis’s powerhouse voice, the band held a fierce command over the crowd throughout their entire half-hour set.

With the sun weakening over ahead, I headed with tired soles back to Manhattan. Union Square promised a six-stringed conclusion to my MMNY day with its open bring-your-own-guitar jam session.

Just as I had missed African Americana, I stumbled into Union Square right as the jam had ended. But just as this misstep had brought unexpected treats in Brooklyn, so it did here across the East River.

When I showed up, the NYC-based band Wise Girl was already winning over the crowd with a straight-forward alt-rock sound. Frontwoman Abby Weitz is equal parts 90’s grunge and riot grrrl, and she plays her guitar loud.

Wise Girl has just the right sound to attract the diverse Saturday night gathering at Union Square. Teenage skater boys took a break from sliding down the park’s handrails to watch the set. An older woman in a pink and black dress was rocking out pretty hard, and I couldn’t blame her. Ms. Weitz gives off that rad aura with her stage presence.

In between songs, Ms. Weitz took a break from rocking out on her guitar to address the crowd. She gushed about playing full-electric in the middle of Union Square.

“I’m from New York and this is the coolest thing I’ve ever done,” she enthused.

Her next song, “I’m a Freak,” brimmed with energy, a catchy blend of pop and punk notes. The lady in the pink and black dress held up peace signs as she danced, while some of the more seasoned guitarists in the crowd tried to play along.

The sun finally started to set on the year’s longest day. Wise Girl finished up its performance with a roar from the audience. I was feeling a little panicky with only 11% on my battery and my tired, sore feet were beat by then. I decided to conclude my journey through the city’s largest, longest music festival.

I trudged toward the Union Square station. “That’s why I love New York in the summer,” I heard a man behind me say. “There’s always a million things going on.” 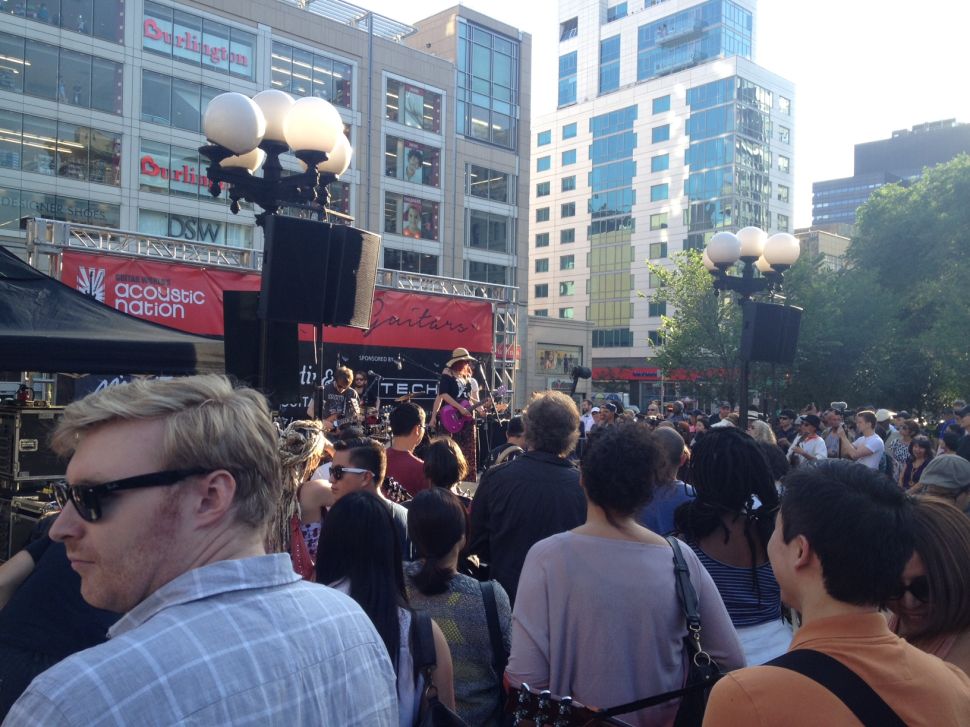