AS LUCK WOULD HAVE IT, THE SILVER FOX had invited me to join him at a retreat in Malibu; a sensational summer camp for adults that’s a cross between a chic boutique hotel on the Amalfi Coast and the Betty Ford Center. Most people came without spouses (children don’t watch themselves, you know) and it was a diverse group. I was struggling up an arid mountain peak when I began chatting with an attractive redhead from San Francisco. We exchanged pertinent information.

“Are you married or divorced?” I asked her as we both sipped from our camel backs in the blazing sun.

“Neither,” she said. “I am married but I am separated. But, we live on the same property but have two different living areas. It’s called nesting.”

“Yes, we have children together and are best friends but we aren’t divorced.”

“So do you see other people?”

“Yes, in between family vacations.”

On a subsequent trip to the Left Coast, I had lunch with Hollywood Mogul at the Ivy in Santa Monica. He looked trim, wiry and youthful as he bounded into the restaurant on two devices. (Everyone who is successful in L.A. looks like they are going to a Lakers game.)

“Our marriage may be dead, but our assets are very much alive,” he said, spooning the espresso crema onto his tongue.

“I had a mentor when I first got into the movie business. [He mentioned a legendary producer.] He’d been married at that point, five or six times, and he said the best business advice he could ever give me was never to get divorced. Every time he got divorced he moved into a smaller and smaller house until he ended up in an apartment on the wrong side of the tracks.”

“The sex went out of the marriage years ago,” Hollywood Mogul said without emotion, “but we’re still best friends.”

“How did you work that deal?” I asked marveling at his alluring tuna tartare.

“She always enjoyed a much quieter life. Listen, I respect a woman who goes gray, but the net net is I don’t want to have sex with a grandmother,” he said, flashing high-wattage laminations at two young starlets sharing crab cakes at the next table.

He flexed his ageless bicep, licked his lips and brandished his Patek as if part of the L.A. mating ritual.

“And where do you all live?”

“She lives in a [bedroom community of L.A.] and I live in the house [gated mansion on über-exclusive Los Angeles drive]. Our girls divide their time when they are in L.A. and it makes total sense. I have no desire for more children and they’re going to get it all anyway. This is the way the old money people do it. So much smarter. As far as I’m concerned, this part of my life is dedicated to fun, fun, fun.”

“So you get together for the holidays?”

“Of course. My favorite time. Darlene [not her real name] makes the meanest turkey. If we had gotten divorced, she would have kept the stuffing recipe. For that alone, it’s worth staying married. And this way I have the best excuse in the world when I’m dating.”

“I’m married so I never have to commit. Now, what’s all this talk of divorce? Are you okay?”

“I always say I married my second wife first,” I laughed.

“WE’RE NOT SEPARATED, we only live separately,” said chic Euro chick (a minor-titled noble from someplace we all like to go on vacation). She flicked her ash, sporting not one but two Buccellati cuffs as we made our way into New York’s Monkey Bar. She double-kissed those in charge and we were seated promptly.

“Do you live in different apartments?”

“No darling, in different wings,” she confessed as she stashed her silver lighter in her chic Boxer Bag. “In my opinion, that’s the only way. We have breakfast and dinner together with the twins in the common area,” she said. “And then we retire to our own wings. It’s divine. Very Edwardian. I have my books, my Kindle. I have peace and quiet.”

“Did divorce ever come up?”

“Divorce is so …” she struggled to find the English word, “so … bourgeois. People got divorced in my parents’ generation. Look how that turned out.”

The following week, I visited a leading clergyman who was recuperating from an illness across town in the well-stocked library of his sprawling West End Avenue apartment.

“If the option is either divorce or a deal, I prefer the latter,” he said.

“You do?” I asked, somewhat surprised.

“Yes, of course,” he said, offering me tea. “There is something to be said for family  dinners, vacation time and holidays. Divorce is a disaster for the children. Some never recover. The kids don’t care if the parents are sleeping together or sleep in the same room. They care that they are both there when they wake up in the morning and go to bed at night. They just want everything to be O.K.

“Sometimes people can’t stay together and divorce is justified. But I always counsel people to stay together if they can,” he said. “I cannot tell you how many people I counsel who have separate bedrooms and lives. And they’re the well-adjusted ones. It’s different when people are unhappy in their 20s and 30s, but making a deal is a phenomenon for 50-year-olds.”

“And you condone extramarital relationships?’

“I didn’t say that. That’s not my business, and who am I to judge? That said, if it comes down to a messy divorce with the parents at war, I honestly think this is a better solution.”

“IF YOU ARE YOUNG and don’t have children, divorce is perfectly fine,” the Seventh Avenue Kingpin declared over luscious gigande beans at the superb Yefsi Estiatorio.

“Is that why you stay together?” I asked, knowing he has his own deal with his long-term spouse.

“When you have children—and I also have grandchildren—it adversely affects a lot of people. I believe in this idea of the family unit. When you build a life together, you don’t divorce your wife or your family because she might not be interested in sex anymore. Sex is not always the driving issue. In fact, I would rate it a distant third at a certain age.

“My children and grandchildren are my focus. I have friends who have gone through  two- or three-year divorces. The damage is incalculable. And then the kids mostly hate all the new players who show up … It’s a story as old as time. The kids, who are no longer kids at this point, are also afraid the parent is going to end up with someone inappropriate and change the will. Don’t think I haven’t seen that before, especially if the kids aren’t as successful as the parents and living off their largesse. And let’s not forget some second wives can be more demanding and mercenary than the first one! That’s trouble.”

“Well, you know what I always say: where there’s a will, there’s a relative,” I said.

He continued: “Imagine spending years and millions, suing each other—years of character assassination in court. For what?  Because someone won’t put up with the wife’s trainer or the husband’s stripper? The Europeans have it right. When the man wants to have a bit of fun. He buys the young lady a Hermès bag and off she goes. The wife gets the earrings from Graff; the bigger the indiscretion, the bigger the stone. They’re not testifying against each other; they’re smart. Think of all the eight-figure divorces.”

“So did you say anything to your wife about the new deal?”

“Some people do and some people don’t,” he said, avoiding the question and looking at his Cartier tank. “The smartest women, in my opinion, turn a blind eye to keep the family together.” He downed his espresso and waved goodbye.

He had an appointment to keep, but didn’t mention with whom.

PART OF THE UPPER CRUST, fabulous interior designer Lily Whitebread and I were catching up over a scrumptious Nutella, fruit and toast confection at the Eurosleek Artisan Boulanger. Witty, entertaining and très intéressante, Lily lives the transatlantic lifestyle while her husband lives in and around Charleston, S.C.

“So do you ever see each other?” I asked.

“Hardly ever,” she said, amused.

“Did you ever consider getting a divorce?”

“So you never see each other?”

“No. We do speak and collaborate over Charlotte (their grown daughter), and he sends flowers on my birthday and anniversary. Who wants to get divorced? Why disrupt your life? I see this as a new trend,” she said, munching on a flaky brioche that apparently had no effect on her rail-thin figure.

“How so?” I raised my hand for more coffee.

“In the old days,” she smiled, “people had the good grace to drop dead. Now everyone works out, eats well and their cholesterol is under control. The men are living so much longer. So when the kids are grown, one is confronted with one’s spouse.”

“Did you actually sit down and work it all out?”

“There’s no need to,” she said, twirling her wedding band. “It just is.”

“Do your friends have deals?”

“Some do and some don’t. The really successful ones tend to. We don’t need a man for anything.”

“Then why be married?” I knew I was pushing Lily’s white buttons.

“It’s part of the fear that women have about not having ‘Mrs.’ in front of their names. Today, one has a choice. Marriage is a choice but not a mandate. Many women went charging into the workforce in my day and then bailed. If the husband lets them go spinning and lunching and shopping, many women would rather take that option.

“For me and my friends, speaking on the phone to our husbands and going off to the South of France or Siena for the summer couldn’t be more wonderful. Brioche, dear?”

WITH MEMORIAL DAY fast approaching and the pleasures of seersucker and linen beckoning, I received a call from a Southern Gentleman I know through the squash circuit. He is going through a War of the Roses-style divorce.

“Up for a game and a martini afterward?” I asked.

“I’ll take the martini but I haven’t been playing lately. Things have been extremely difficult. We’re actually going to trial next week,” he said in shell-shocked tone.

“Why don’t you just split it down the middle and call it a day?” I asked.

“She’s getting all sorts of bad advice from people who are telling her she should be getting more than I have. It’s been disastrous. The only people who are winning are the lawyers.”

“Yes, I have heard that before,” I sympathized.

“These divorce lawyers are undertakers for the living,“ he moaned. “You lose a loved one and all your money. Not to mention I hardly see my children anymore.”

“I am so sorry to hear that. Let’s make plans for drinks at the club,” I offered.

“That would be great,” he said before hanging up. “If I could have martinis by intravenous, I would.”

Richard Kirshenbaum is the CEO of NSG/SWAT and the co-founder of Blackwell Fine Jamaican Rum. Follow him on Twitter @rkirshenbaum. 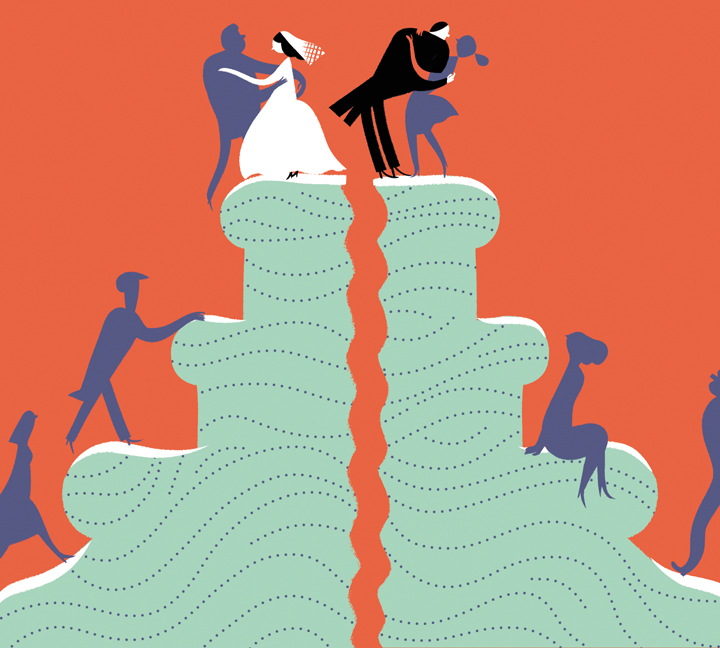