The stunning defeat of Eric Cantor represents a loss for America. Few men in American public life are as decent, caring, and kind.

I know Eric personally. He is a religious man of humility who believes he has something to learn from everyone. He speaks up when he has something important to contribute and otherwise listens.

We have studied many hours of Torah together. Here I was. A rabbi teaching one of the most powerful political figures in the country. And he soaked up every word, displayed an intense curiosity, and thanked me for enriching him with knowledge.

He was particularly interested in the Jewish concept of struggle. “Israel” translates as “he who wrestles with God” and I shared with him how our religion judges righteousness not through perfection but through the degree to which a man strives to do what’s right, even if he sometimes fails. He cited something of this concept in the classy and graceful press conference he held the morning after his defeat, in which he blamed no one but himself for his loss and cited Old Testament figures who overcome setbacks to carry on optimistically.

Eric is not flashy and he is not desperate to be loved. He pursues principles rather than popularity contests. A man of deep-seated conviction, his salt-of-the-earth values stem from his upbringing in Richmond to a family with strong communal involvement. They are committed Jews who till today serve in leadership positions in Synagogues and educational establishments. Eric’s mother is a warm Southern matron with a caring smile who converses freely and kindly. You could never have guessed that she has a son in high position of power.

But what was most responsible for Eric’s meteoric rise to House Majority Leader is his being a people person. Whenever I write to him, no matter how busy, he always writes back. And that includes the night of his defeat where he remained the consummate Southern gentleman.

The press reports that I have seen this week about Eric being too focused on fundraising for the Republican leadership belies his acceptance of my multiple invitations to lecture before young Jews about the importance of spiritual values, where there was nothing political or financial to gain. These lectures are available online and the viewer can instantly see the sincerity with which he addresses the audience and the importance he attaches to America becoming a nation of high morals and ideals.

There has also always been a core decency to Eric. For all the criticism lodged against him by his opponents about partisanship, I remember asking his opinion about my strong public support for Samantha Power after she had been accused of anti-Israel bias. Samantha was very close to President Obama who would ultimately nominate her for the position of U.S. Ambassador to the UN. But that did not stop Eric from telling me that if Samantha was being falsely maligned, it was my responsibility to defend her and tell the truth. This even though many Republican voices were strongly critical of Samantha.

I never heard Eric say a single unkind word about another political figure, even as he might disagree with them about policy. He abided by the Jewish prohibition of lashon hara, speaking badly about people behind their back.

About two years ago my friend Cory Booker and I delivered a lecture together in Richmond. Cory was a rising Democratic star—he was mayor of Newark and would soon become a U.S. Senator. I asked Eric to meet him in Richmond and, though he could not join us, he arranged for us to be invited to his brother’s home for Shabbat dinner where we all had a wonderful Friday night together. Eric told me how much he admired Cory’s educational efforts in Newark.

When I led a Birthright trip to Israel a few years ago, Eric was in Jerusalem and I asked him to address the group, which he did on Friday night at the Kotel. It was a moving and beautiful speech that deeply touched the 50 young American Jews who were honored to hear an American leader at the spiritual epicenter of the Jewish people. Eric spoke of being an American Jew with a strong love for Israel as a bastion of freedom and human rights. He said that Israel was the antidote to the holocaust and that we all had to be invested in its security and future.

I ran for Congress two years ago and quickly became disillusioned with the gerrymandering and the absence of real turnover in Congress. Eric’s defeat demonstrates the vibrancy of American democracy in that even the most powerful leaders are always accountable to the people. Eric acknowledged as much in his brave and gracious press conference that was a model of maturity and perspective. But for our country’s sake, I truly hope that Eric will find his way back to a leading role in American public life. And quickly. We need men of his honesty, intelligence, sincerity, and integrity. 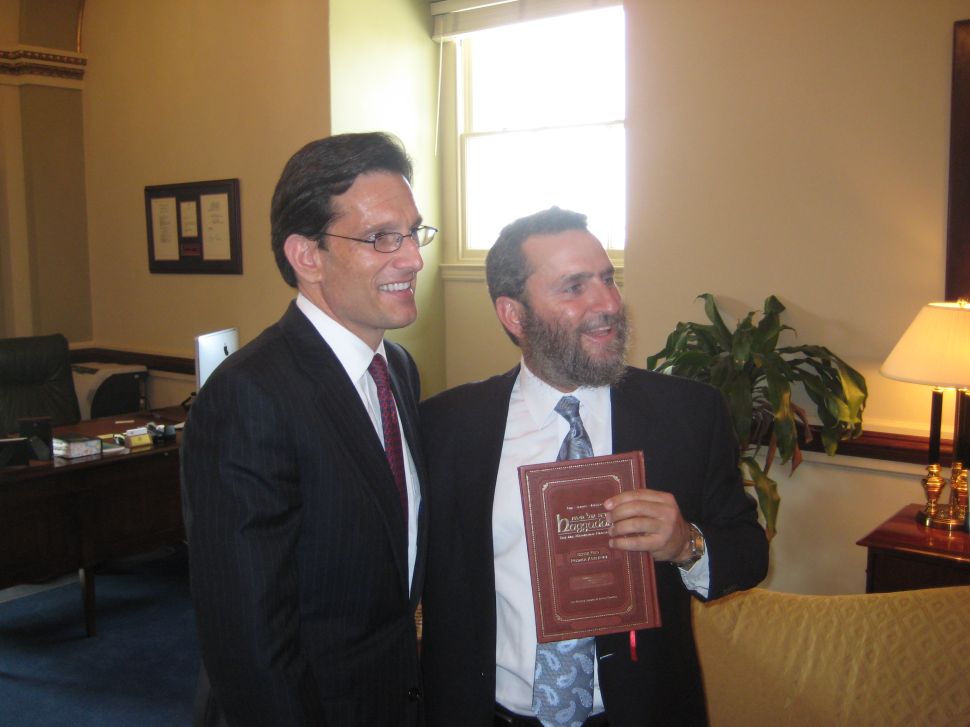