1. How does Gilly know that Molestown is about to attacked?

Oh, that one’s easy! Gilly is from beyond the wall—she would definitely know the sounds of a Wildling raiding party. The thing about Craster’s was that it was the Switzerland of that no-man’s land. Crows and Wildlings would duke it out and kill each other all the time, but Craster was allowed to be one of the few Wildlings with a tenuous alliance with the Night’s Watch. (In the books this is explained by the fact that Craster’s dad, a Crow, had sex with Craster’s mom, a Wildling, and then abandoned both of them beyond the Wall. You can just imagine what kind of fucked-up Norma Bates upbringing that led to.)

But if we’re being honest, wouldn’t we have been happier to see Gilly gone and Sam adopted by a woman who could belch The Bear and the Maiden Fair? Now that’s the kind of fun foster family dynamic I could get into!

2. So…what was with that story about Orson and the beetles? It kind of just trailed off there at the end, but it seemed important that Tyrion and Jaime bonded in their possible final minutes together over their mentally handicapped cousin.

Besides adding the evening’s second moment of morbid levity (the first would have been Arya unable to control her giggling fit over the irony of Aunt Lysa’s untimely demise), the tale about dumb Orson and his beetles was important precisely because of its banality. As Jaime pointed out, their world is full of horrific and unnecessary violence. Women and children die painfully, for no reason. War is hell, etc., etc. But for Tyrion, this isn’t the work of an indifferent god, nor is there some cosmic justice that will ultimately tip the hand in his favor during the upcoming duel. Because its people–stupid, cruel, brutish people–who are running the show. Not gods. One could argue that more often than not, these people all tend to be Lannisters, but let’s not stretch this overtaxed analogy any further. After all, they showed you a beetle crawling on the ground during that speech. (I couldn’t imagine a more ham-fisted moment than if a ladder fell behind Littlefinger during his confrontation with Varys last season.)
[youtube https://www.youtube.com/watch?v=9IK7Ru6UUoE]
And maybe the lack of resolution was the point…like maybe we just witnessed a sly HBO writer’s dig at George RR, who, like Tyrion, can’t seem to find a satisfying resolution that would explain all of this senseless violence.

3. Why does Jorah get a pardon from Tywin if he’s no longer spying on Dany? And why does it come to Ser Barristan?

You think that in between ruling a kingdom and accusing his son of murdering his grandson, Tywin Lannister can’t find a couple minutes to sow discontent overseas? That man is the Rumsfeld of Westeros, and the Meereen situation is the known unknown. (OK, follow me on this one.)
Tywin knows that:
1) Dany has dragons and could make a bid for the Iron Throne should she ever make it overseas.
2) She has two extremely competent ex-Westerosi advising her on everything.
3) Jorah was originally intended to spy on Dany in exchange for a pardon, but has appeared to have drunk her Kool-Aid and gone over to worship in the cult of Mother of Dragons.

4.) Ser Barristan Selmy, a former knight of the King’s Watch, would find nothing in the world so craven as a man selling the secrets of his king or queen.

Solution? Send Jorah’s pardon to Ser Barristan, with the knowledge that this would cast Jorah’s loyalty in serious doubt and leave Dany crippled with the loss of her most trusted advisor.

By the way, was anything sadder than watching Ser Friendzone leave Meereen on his horse? Follow-up question: Wasn’t he supposed to be in Yunkai with Daario? That’s what you get for slacking off on the job, Jorah!
4. What’s up with Roose Bolton changing Ramsay’s last name from Snow to Bolton? Can he just do that?

Sort of. You can’t just decide make your bastard your legitimate son. But the king can.

But an acknowledged bastard is still a bastard. It carries a huge social stigma, and you are only nominally part of the family. Most acknowledged bastards are not raised in the castle alongside legitimate children, like Jon is. Most are sent to live elsewhere or to join the Night’s Watch.

The next level up from being acknowledged is full legitimization, which makes the bastard a full son of his father. But this is extremely rare, and traditionally can only be done by the king. That’s what was on that piece of paper Roose handed Ramsay: A royal decree making him a Bolton, signed, presumably, by Tommen of the House Baratheon, First of his Name, King of the Andals and yadda yadda — but written by Tywin, of course. Remember that the Lannisters owe Roose Bolton a great debt, for that whole Red Wedding thing. Legitimizing his bastard son is the least they can do.

There is some question as to why Ned never asked King Robert to legitimize Jon, being as he treated him almost like a true son anyway. And Robb apparently had plans to do so when he was crowned King in the North, but we all know how that one turned out. So this huge honor has been bestowed only on one person in almost 100 years: our psychotic friend Ramsay Snow, now called Ramsay Bolton and able to inherit his father’s lands and titles as Lord of the Dreadfort and Warden of the North.

5. What on earth has come over sweet, innocent little Sansa Stark?

Well, there’s only so many shocks to the system one sweet, innocent girl can take. The steel in her is finally coming out—and let’s not forget who her mother was, after all. Sansa may have been a silly, dreamy romantic, but she was never stupid. Sure, she’s still quite a few lessons behind her sister in the school of hard knocks, but now she’s got the best tutor in all of Westeros: devious, snarling Littlefinger.

Look at how she lies to the lords of the Vale. She simply tells the truth, using her real emotions to give it force, and then twists what happened ever so slightly to her own purposes. Sound familiar? She’s been watching Petyr, taking in his lessons about how to deceive, how to get what she wants. And the look he gives her after she successfully carries it off, that isn’t a look of gratitude, or astonishment, or relief. It’s a look of pride. He’s proud of her.

In the books, Sansa remains a much more passive character. Littlefinger has to patiently sit her down and teach her the ways of the real world. But this (much less boring) version of Sansa has her eyes open, and she is coming to understand what it takes to live in this terrifying and violent world.

That dress she wears in her last scene is evidence that she knows exactly what she’s doing: yes, she has hitched her wagon to Littlefinger’s star, and he’s a slippery snake. But he’s also a known quantity. Someone she can maintain some measure of power over, simply because of the way she looks.

6. Why does Oberyn keep the Mountain alive instead of just killing him when he has the chance? Why does he doom both himself and Tyrion to death, just so he can taunt the guy?

Because this has never been about anything else. It certainly has never been about Tyrion in any way. Oberyn is in King’s Landing for one reason and one reason only: to revenge himself on the man responsible for his sister’s rape and murder. He doesn’t just want to kill the guy, he wants him to die in agony, confessing his crimes.

But then Oberyn is also something of a showman and a show-off. It is there in the way he dresses, in his in-your-face PDA with Ellaria, in his ostentatious, capoeira-inflected fighting style. Finding a way to get his revenge legally and in public was the best outcome he could have hoped for, so of course he is going to milk it for all it is worth. To get the Mountain to confess publicly while he gloats over him. When he thinks he has the battle wrapped up, he even goes so far as to accuse Tywin of giving the order.

But of course this need for a showy public display of vengeance makes him reckless, and his skull pays the ultimate price. 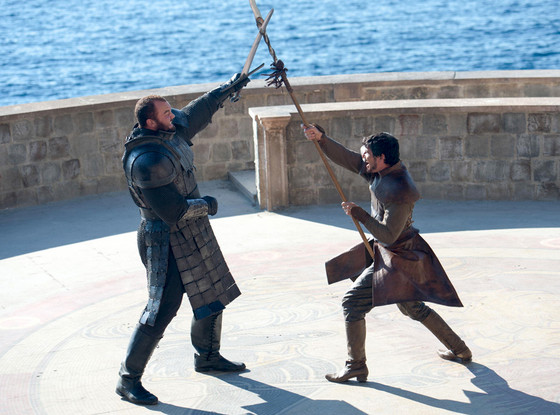