As a couple leans in for a final kiss atop the Empire State Building at the end of a film, it seems that New York City is a lover’s paradise. But, when isolated from Hollywood’s lights and cameras, the action in the Big Apple isn’t so romantic. Between running to catch the 1 train and trying to pay the ever-inflated rent, there’s no time left to roam the picturesque parts of town and magically stumble upon your prince charming. And chances are the guy who asked for your number on the subway isn’t a Harvard grad at Morgan Stanley, as much as you want him to be.

So, in a world where 8.3 million people share one metropolis and intimacy is almost obsolete, young professionals are turning to Tinder in hopes that they will be one, two, or three of over 10 million matches per day. And, if they’re (not so) lucky, a story similar to their own may end up on a real romcom: the new city-based web series, “Local Attraction.”

Written and directed by 26-year-old actor Connor Hines, “Local Attraction” follows some of the city’s most grandiose personalities as they look for love after a swipe right and a few awkward messages. Included in the character list are the Uptown finance snob, the overly zen actor, the dating site addict—all played by Mr. Hines—and their disconcerted and disheveled dates, who sit through the longest 20-minute meals of their lives. Perhaps Wall Street workers, method actors, and clubbing creeps would say that their fictional doppelgängers are stereotypical and exaggerated, but at moments, cosmopolitan bachelorettes may suffer from relationship PTSD when the script is too close for comfort. Still, Mr. Hines insists that his jokes are all in good fun.

“Those characters are really caricatures. They are big and outrageous, and that’s just good entertainment. It’s satire,” he observed.

Originally named “Tinder Love,” the show brings storytelling into the 21st century by countering the fantastical Tom Hanks/Meg Ryan flicks that serve as an amorous paragon. Two individuals meet in an intrinsically New York spot—a coffee shop in Brooklyn or a fancy restaurant on the island. For the first three episodes, the ambiance is tense and ultimately futile, underscoring the downside of digital dating. However, the series itself is more of a journey into the wondrous world of romance in the technological age, and Mr. Hines implied that for the remaining five episodes, the plot and its protagonists might be a little less black and white. His goal is not to scandalize Tinder, but instead to find the humor in this cyber phenomenon.

“I was fascinated with how it [Tinder] operates,” Mr. Hines explained. “I don’t think it’s any harder to meet people nowadays, but why go through the ‘trouble’ of approaching someone at a bar when you can just ‘swipe’ on a couch? As in every other case, technology eliminates the work along with the human contact component.”

If “Local Attraction” is actually intended to investigate Tinder’s impact, it would only make sense for Mr. Hines to stray from his trend of horrendously disastrous dates to explore one or two good ones, because for some lucky lovers, the app is their key to bliss.  In April, Elle Magazine published an article on fiancés who met on Tinder, and with thousands of personal anecdotes floating around, the Tinder relationship is no longer an old wives’ tale.  Of course, for every virtual “Sleepless in Seattle,” there are numerous “Sex and the City” Samantha encounters, but that’s always been part of the dating game, even pre-Internet. And with almost 11.6 million monthly active users, there’s got to be a diamond in the ruff somewhere if you just keep swiping and give the app a chance.

For some, the chemistry on the phone screen may not carry into the physical realm. For others, a click on the Tinder heart might mean giving their heart away forever. For both, Mr. Hines’ web series may prove a good laugh after that original (and possibly final) Tinder outing.

“The first date is a pretty universal experience,” Mr. Hines claimed. “You may not relate to either character, but you can relate to the discomfort and anxiety. I also think the blind date makes for a fascinating forum to expose people’s character—what they choose to share and why.”

But even if Tinder’s the new matchmaker for that universal first date, there’s still room for the likes of Titanic at the theater. “People go to the movies to escape reality,” Mr. Hines concluded. “Those who pay to see a romcom aren’t necessarily looking for [a] realistic depiction of love and relationships, but an idealistic depiction. Tinder is not a great ‘meet cute.’” 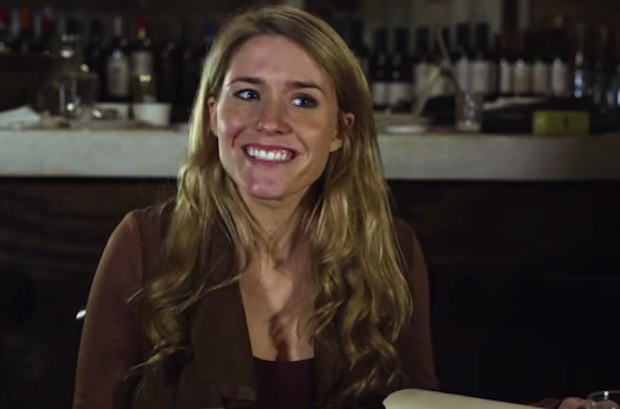